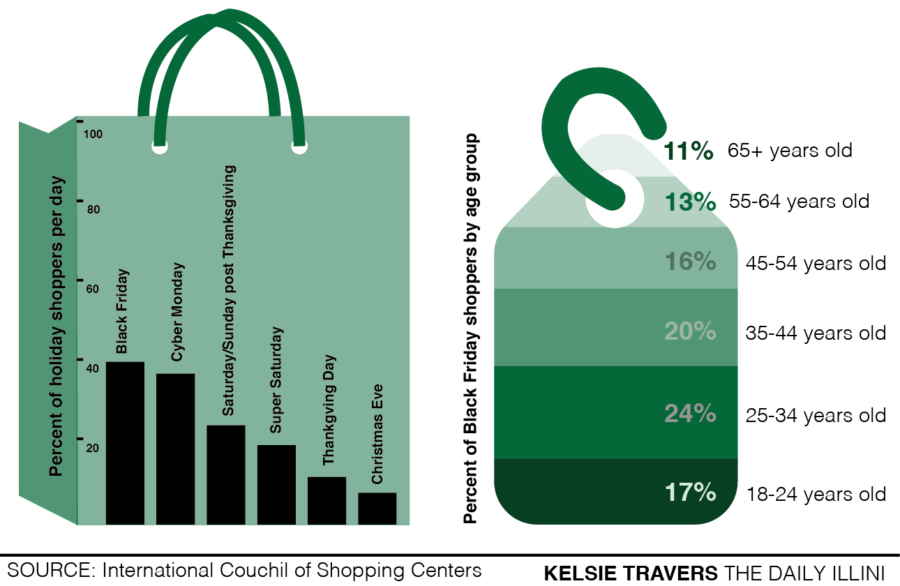 Since the start of the Macy’s Thanksgiving Day Parade in 1924, the Friday after Thanksgiving has become known as Black Friday — the unofficial start to the holiday shopping season.

Over the years, a breed of devoted customers have been known to form lines outside storefronts on Thanksgiving Day, gearing up for their bargain-day battle, regardless of rain or snow.

Yet the long lines, chaotic parking lots and 50-percent-off deals have become more of a spectacle to those who choose to stay home, and surveys show that fewer shoppers participate each year. According to a National Retail Federation survey, last year’s sales were estimated at $50.9 billion, an 11.3 percent decrease from 2013 projections, and a 5 percent decrease in overall shoppers who visited stores.

In addition to avoiding the lines and doorbuster deals, Danielle Komsky, a senior in LAS, is questioning the ethical basis of Thanksgiving and Black Friday shopping by boycotting the two days altogether.

“Before, I wasn’t against (Black Friday) because it used to start at 2 or 3 in the morning and that was after (Thanksgiving) dinner, so if you wanted to stay up late you could do that,” Komsky said. “But now, big corporate businesses are opening up at 5 p.m. (on Thanksgiving), and I think that’s just crazy. What are these people doing for Thanksgiving dinner? Are you skipping dinner altogether to camp outside of a store to get a good place in line? Are you not spending time with your family? It takes away from the whole concept of Thanksgiving.”

Komsky’s views are becoming more popular with other consumers shopping less every year, but even when customers choose not to support Black Friday, they’re mainly focusing on big box retail stores, rather than local establishments. This transition has the potential to hurt local business.

To counteract this issue, a new movement that started in 2010, Small Business Saturday, encourages holiday shoppers to frequent their small, local establishments.

Because big box retail stores drive Black Friday sales, many shoppers forget that their local establishments are participating in Black Friday, too.

Small Business Saturday insinuates that Black Friday doesn’t apply to local businesses though, when in fact many local stores do participate.

Shira Epstein, who co-owns Champaign Surplus with her husband Dan, has found that their customers have a relaxed experience when shopping in their store.

“Historically, we were always open (on Black Friday), but we never made a big to-do about it, deferring to the big boxes of the world in the past,” said Epstein, who has had the business in her family since 1947. “But when my husband and I bought the business from my parents, we started to do specials on Black Friday, so it is a big day of the year for us, and our customers seem to like it.”

For individuals like Komsky, she said she often forgets that local businesses do participate in Black Friday, establishments that lack long lines and an overwhelming crowd, qualities that Komsky said could convince her to shop local on Black Friday.

Meredith Herbert, manager of three years at Apricot Lane, said the store values the opportunity for their employees to spend time with their family on Thanksgiving; therefore, they will only be open on Friday. Herbert said this is made possible because they are a family-owned boutique and not a corporate business.

“There actually are jobs in the economy when you support your local business and not just a big national chain store,” Epstein said. “We try to give back to the community as much as we can, and we definitely feel that our customers support us in that same way.”

“There’s increasing awareness all around town with the amazing local businesses that are here in Champaign-Urbana, and if we can try to shop that more, not just during the crazy Thanksgiving shopping weekend but throughout the whole year,” Epstein said.