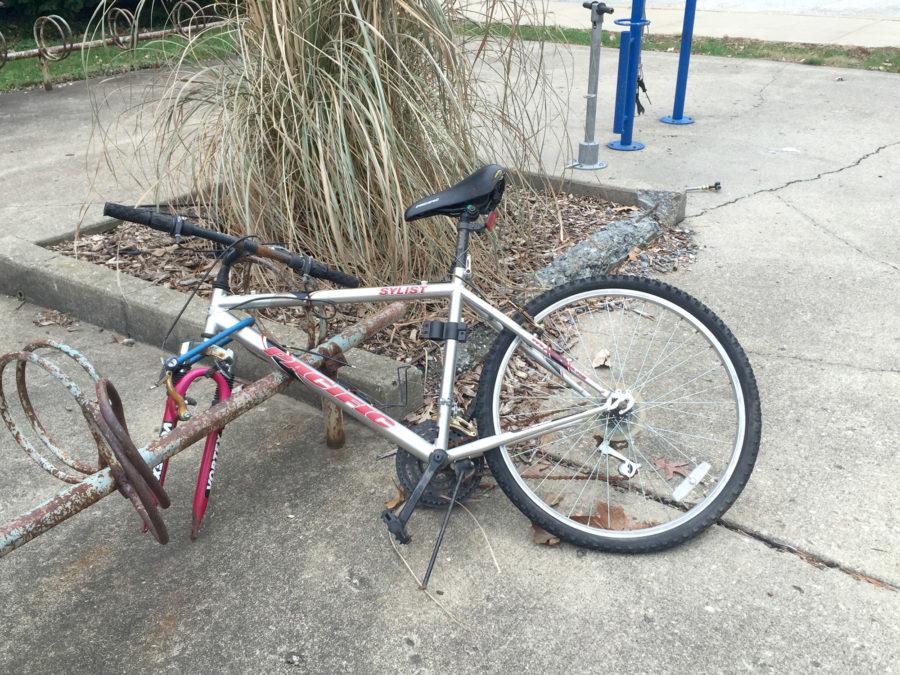 A bike locked on the rack north of the Henry Administration Building has rusted gears and handlebars and is missing a wheel. Parking department employees tag bikes like these before taking them to the Campus Bike Center.

As winter break gets closer and deadlines start piling up, things are forgotten. Usually it’s small things, like quizzes or worksheets. But often, it’s something larger: bicycles.

University Facilities and Services will issue impoundment warnings to bikes that appear to be abandoned, and Neutral Cycle will tag bikes with winter storage offers as the semester ends.

“We’re trying to just mitigate the number that we have to go sweep,” said Stacey DeLorenzo, Campus Bicycle Coordinator.

Facilities and Services works with the parking department to find and tag bicycles that are abandoned, though they don’t have the funding for a dedicated division.

“The eyes and ears are the bicyclists every day,” she said.

Students can call in the location of an abandoned bike and a parking employee will tag it.

“We try to be as expedient as possible at removing them,” DeLorenzo said.

Facilities and Services does their largest bicycle sweep in the spring around commencement. Parking department employees will look for bikes that are fallen over or have a rusty chain.

“We are not able to just make the decision to immediately declare something abandoned,” DeLorenzo said.

Employees have to wait for a few weeks before removing the bike to give the owner a chance to claim the bike.

“This is your mode of transportation — treat it like a car,” she said. “You can’t just park your car wherever you feel like it; you can’t drive your car down the wrong side of the street, and you can’t just leave your car in a parking lot for three months and expect it to be there.”

At the end of the semester, the parking department takes any unmoved bikes to a storage unit where they are checked for registration and held for a minimum of 30 days.

She said the amount of bikes actually held in the storage unit varies by year — it can range from 100 to 1,000.

“That’s what makes it long and tedious because we don’t have room to store 1,000 bikes,” she said.

Once a bike is impounded and put into storage, there are three possible outcomes: It can be repaired and sold, scrapped for parts or the owner can request to have their bike back.

Some bikes are still in good enough shape to be fixed up at the Campus Bike Center.

“After the semester ends we get a lot of bikes coming in, and as the semester begins we sell a lot of bikes, and over the winter we build up a stock of ready-to-sell bikes,” said Joel Sarmiento, senior in Engineering. “The employees have more time to build up bikes instead of helping a customer fix their own.”

Bicycle with missing wheels, rusted gears and bent frames are taken apart and used for the Bike Project’s “Build a Bike” program.

“Basically if the frame is damaged at all we’ll try to take parts from it,” he said. “Even bikes that are in really bad disrepair we’ll consider selling.”

Bikes that can be repaired cost $150 on average.

“What strikes me about some of them is not the disrepair because that’s kind of what you’d expect. They’ve been confiscated, they’ve been left out for a long time, no one cared about them,” Sarmiento said. “Sometimes you find really nice bikes that have been donated or confiscated that are in pretty nice condition.”

Students with an impounded bike are required to pay a $40 fee.

“If you’re a student, it’s a good chunk of change. We want to use it more as an education tool for people to ride safely, operate safely, be a good bicycle citizen,” DeLorenzo said.

Over the winter, Neutral Cycle works with Facilities and Services to offer winter storage.

“We don’t have the space to do something like that,” DeLorenzo said.

Neutral Cycle’s program is a good option for students living in the dorms who don’t want to take their bike home for break. DeLorenzo added that the residential halls have the highest amount of impounded bikes.

Winter break storage is $20, and spring semester storage is $45. While this may seem expensive, it keeps the bike out of the elements and away from impoundment — and the $40 fee.

Tyler Kappelli, freshman in Engineering, is planning on taking his bike home for the winter. He said he was surprised by how many bikes were abandoned.

“I go to the same building, and I notice the same bikes are there, and they don’t really move,” he said. “It’s surprising considering bikes cost a considerable amount of money.”

Kappelli registered his bike at the beginning of the year. Registration is mandatory, but he also wanted to protect against thieves.

He said he was interested in seeing how many bikes stayed up after winter break.

Correction: A previous version of this article incorrectly stated that Neutral Cycle’s winter break storage rate is $15. The article should have stated the cost as $20. The Daily Illini regrets the error.