The challenges behind the service: University student reflects on life before, after service dog 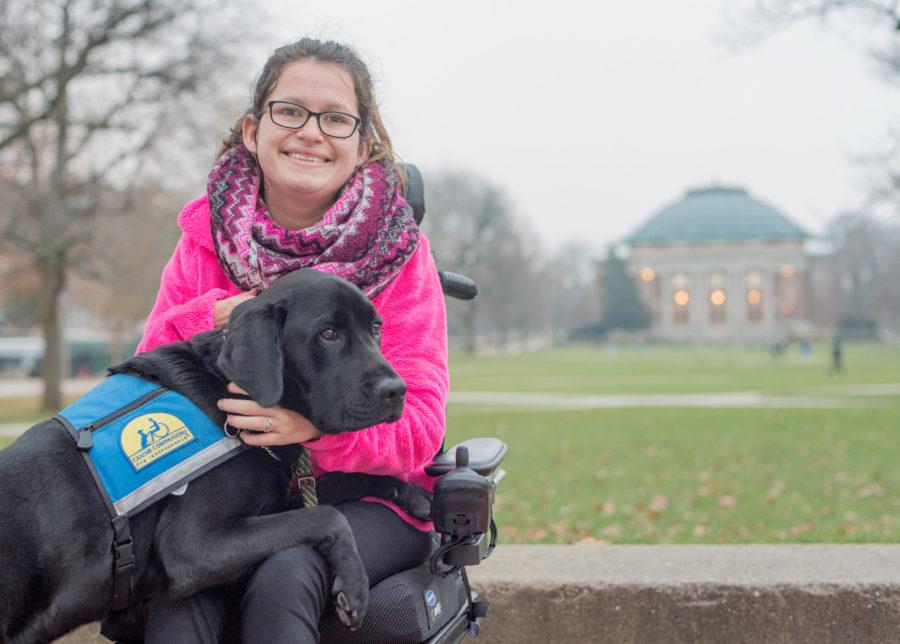 With a blue and yellow leash wrapped tightly around her hand, Caitlin Bottcher sat outside the Illini Union Art Gallery, staring at an ink pen that was lying on the floor.

“Let’s go,” she said, smacking her lips together and calling her service dog Honest, a black lab-golden retriever mix, to attention. “ Honest, get.”

In a matter of seconds, the dog was no longer sprawled across the floor. He was gnawing at the utensil, using his paws to apply pressure on one end of the pen, so he could grab it with his teeth.

“Come on,” she said, continuing to smack her lips together. “Come on.”

Suddenly, the pen was no longer on the floor. It was in his mouth — and almost in the hands of his owner. On command, he placed it in her palm.

In the back of her mind, however, she remembered the times when Honest wasn’t by her side.

Caitlin, a junior in ACES, has cerebral palsy. This makes everyday tasks — like picking up pens off the floor — more difficult. Although she can walk with the support of a leg brace and walker, she chooses to navigate campus with a powered wheelchair.

Before Honest came into the picture, her life was a little different.

She remembers dropping one of her books on the floor and falling out of her chair trying to get it.

“I was literally laying upside down and hanging from my chair for an hour because I lost my balance,” Caitlin said.

She remembers dropping identification cards on the ground and having to wait for help.

“I’m clumsy, and I drop things a lot,” Caitlin said.

But as Caitlin stares at her service dog, who is now laying on the carpet beside her wheelchair, she realizes how much he means to her.

Honest does not just provide services. He provides independence.

“There are so many things I couldn’t do before that he helps me do now,” Caitlin said. “I lacked independence before he came into the picture.”

Honest knows 40 commands. He can push elevator buttons. He can tug at the end of her laundry bag. When Caitlin waits in line at Starbucks, he can hand the barista her credit card.

Her life with him in it — that’s much easier. Getting him was the hard part.

“The whole process itself has taken five years.”

In 2010, Caitlin started setting her sights for the future, as many high school students do. She would enter college in the fall of 2012, and she wondered what it would be like as a student with a disability.

Her mother and sister encouraged her to apply for a service dog.

“We all wanted her to get a service dog,” said Corina Bottcher, junior in Education and Caitlin’s twin sister. “She needs someone there to make sure she’s OK.”

Caitlin and her family researched the procedures. Toward the end of 2010, they decided to fill out an “application request form” through Canine Companions for Independence, an organization based out of Santa Rosa, California. The form asked questions about Caitlin’s situation and disability. It also served as the preliminary application.

“My mom was hoping that I could come to college with a dog, and that it would make the transition easier,” Caitlin said. “It didn’t happen that way.”

At the start of 2011, the organization contacted Caitlin about her initial application.

Two years later, she had her first phone interview.

She forwarded her medical documents and reference forms. Then, she travelled to Ohio for an in-person interview, where she interacted with some of the dogs.

Although Canine Companions for Independence accepted her into the program, a dog capable of fulfilling her situation needed to be trained. She was then placed on a waiting list.

“It was hard. I went there and got to interact with the dogs and get a preview of what it would be like. It was like, ‘Okay, now we teased you, and now you wait on a waiting list.’ I couldn’t really plan ahead for what it would be like,” Caitlin said. “I honestly forgot that it was a thing. It was to a point where I was like, ‘Well, I’m never going to get a dog anyways.’”

The wait was hard on the rest of her family as well.

“At times, we felt like we were getting our hopes up,” Corina said. “We’re never going to get this dog. We’re going to be on this wait list.”

According to Alison Kiolbasa, University alumna, Caitlin’s situation reflects a common trend for many service dog organizations across the United States and world, not just Canine Companions.

As one of the founding members of Illini Service Dogs, a University Registered Student Organization that trains and places service dogs across the United States, Kiolbasa has come to know the field.

Kiolbasa said five years isn’t even the longest wait time. She has discovered that, for some programs, the application process and wait time can take a total of eight to 10 years.

“Our waiting list is between two to three years long, and that’s of course keeping in mind that we graduate between two to three dogs a year,” Kiolbasa said. “Our numbers might not look giant, but we’re kind of a small grassroots organization. That’s how we function best right now.”

Kiolbasa said Illini Service Dogs accepts an average of 50 applications each year. It declines between 20 and 30.

But managing 50 recipients on an average graduation rate of 2-3 dogs can be difficult.

“In order to get through them, we have people already who have waited an upward of two years,” Kiolbasa said.

According to Assistance Dogs International, there are 39 programs in Illinois.

One is SIT Service Dogs, based out of Ava, Illinois. Program director Lex Dietz said the organization sees between 20 to 40 applications a month.

Each year, the organization places about 13-15 dogs.

Kiolbasa said training a service dog is costly, which may contribute to the long waiting list across service dog organizations. Illini Service Dog estimates that each of its dogs cost $10,000. The organization provides these dogs free of charge.

“A lot of organizations charge for a dog, and they require you to pay out of pocket, or they’ll offer to fundraise for you. Most of the time that fundraising causes you to pay the victim card. People with a disability don’t want to be victimized,” Kiolbasa said. “Because our organization does everything for free, we can only train so many dogs per year.”

For Dietz, it’s the training schedule and requirements.

“The wait time is necessary because you want to make sure the dog is trained individually,” Dietz said. “A dog that is going to a 13-year-old with a seizure disorder is going to be different than one going to someone with muscular dystrophy who is 30.”

“Dogs just graduate at their own pace,” she said.

The dogs start with neuro-stimulating exercises as early as day three of their life. Trainers tickle the puppies’ paws and immerse them in areas with varying temperatures and noise levels. At six months, the puppies socialize more. They take field trips to movie theaters and go to classes with college students. They also learn basic obedience training — sit, down, come.

While a dog is in training, Dietz said trainers are able to tell what skill sets each dog has and whether they would be a better seizure-response dog or mobility-service dog — like Honest.

When Caitlin got the call this past September, she told herself not to get excited. So much could still interfere.

“I wasn’t expecting it. I was shocked and surprised,” Caitlin said. “I was telling everyone that this is not set in stone. Until I come home with a puppy, we can’t get our hopes up.”

Next, she was the one who needed to be trained. She took two weeks off school to attend sessions in Ohio, getting to know each dog and learning the necessary care for a service dog.

There, she met Honest.

At first, she didn’t think he was the one.

“When I first met this guy, he was the last one I wanted,” she said. “He’s a little crazy.”

But moving her eyes toward the edge of her wheelchair, she stares at Honest, who is gently draping his face across his paws.

“Now I couldn’t imagine anyone else,” she said.

Though the wait was difficult, Caitlin said she wouldn’t have it any other way.

“I can recall times when I was kid and super lonely and didn’t have a lot of friends. Just the friendship that this guy brings to my life; that’s huge,” Caitlin said. “It’s a completely different experience being in college and having a dog.”

Corina said she saw a change in her sister as soon as Honest came into her life.

“She’s overall a happier person. I think she feels like she has someone there to be with,” Corina said. “It was what she was missing in life.”

Tugging on the blue and yellow leash again, Caitlin has a new command for Honest.

She started patting her lap with her hands.

Honest immediately stood on his hind legs. He placed his head in her lap.

“You don’t know what love is until there’s a being attached to you.”