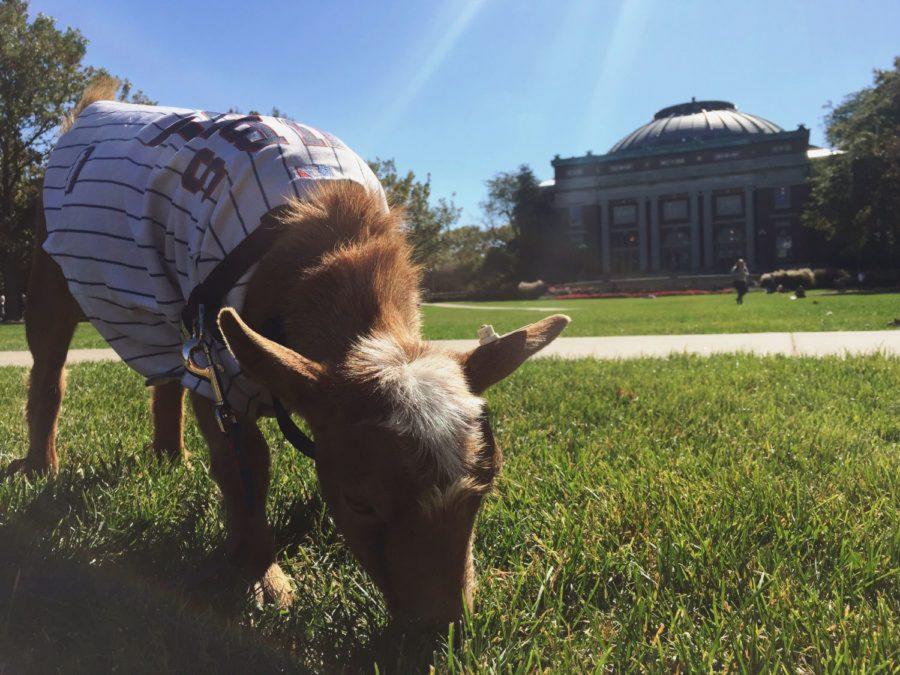 Littleton the Goat munches on some grass on the Quad.

In light of the Chicago Cubs getting as far as the NLCS this past season, many Chicagoans and University students are attributing Littleton the Goat with the team’s successes. The Cubs have not won a World Series since 1908.

Littleton’s luck continued through the playoffs. When the Cubs were playing the Cardinals during the playoffs, Marinis and Littleton were supporting the team outside Wrigley. At one game, he said the Cubs were down by one, so he considered leaving in case anyone got mad, but while there, the team scored all six runs to win the game.

Originally, Marinis said he went on Craigslist to buy a puppy, and when he searched the site, dwarf pygmy goats fell under the same category. Marinis, who attended Mizzou last year, bought Littleton and moved him into his fraternity house. It was not a surprising decision for Marinis to buy a goat because his family is close friends with the family of the Billy Goat curse-giver himself, Billy Sianis.

Marinis said Littleton’s popularity immediately took off at Mizzou. His social media accounts blew up (the goat’s Instagram has over 2,000 followers), and sorority girls came in droves to see him. But Marinis said things really took off when he brought Littleton to Wrigley Field for the first time and news crews from Sportscenter and CBS Chicago took interest, bringing the “reverse the curse” hype.

Now, Littleton even has his own website with merchandise like beer koozies and t-shirts with his face on them.

Just like at Mizzou, Marinis said Littleton has already gained fame on campus. On Tuesday, he was featured on the Illinois Snap Story.

“We were walking him and the bus literally stopped, and the driver asks us if it was a goat, and she made us stay right there when she was taking pictures. We (also) took him to the Quad and some teacher told us to wait right there, and she got all of her colleagues and everybody out to see him,” he said.

Marinis said there are no challenges with taking care of a goat at college. They go on walks, and he tries to give him goat feed even though Littleton prefers to graze on any grass and leaves in sight.

“He’s better than a dog. He doesn’t jump around, he’s really chill, like he wants to be near people at all times, and he wants to sit on your lap, and that’s it,” Marinis said. “He just eats everything and does his own thing.”

“The Cubs are really good, we have really good players obviously, a good new manager and everything, but at the same time, (Marinis) is really close family friends with the family that owned the … original billy goat that cursed them so I think that this is just the last piece of the puzzle they needed,” Park said.

Though the Cubs season ended during the NLCS, only time will tell if Littleton will truly reverse the curse. But if he does, Marinis predicts great things for the goat.