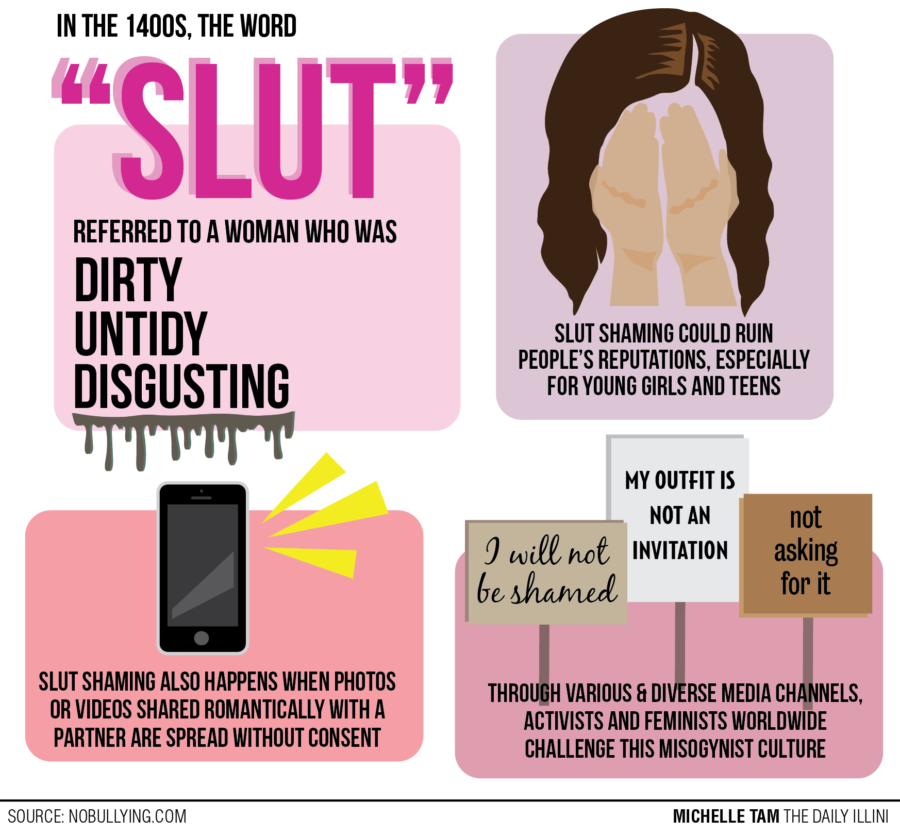 As a resident advisor for Indiana State University, Taylor Letofsky choversees students in one of the university’s residence halls.

But one day, she witnessed a dramatic breakup on her floor.

“Someone posted a picture on Yik Yak of her car being keyed and the word ‘slut’ written in mustard on the car. She eventually left school,” Letofsky said.

Also an intern at the University’s Women’s Resources Center, Letofsky said this is situation is an occurance commonly known as slut shaming.

Slut shaming is defined the harassment of a woman for exhibiting sexual behaviors that deviate from societal norms, according to NoBullying.com.

According to Molly McLayss, assistant director of the Women’s Resources Center, women all over the world experience these occurrences.

“I think we live in a culture more broadly than just college that has sexual expectations for women and punish those who don’t align with them. There’s a double standard, where women are expected to be pure, but not a prude, and to be sexy, but not a slut. Because women are put in such a narrow space, it can be impossible to meet this standard,” McLay said.

Letofsky explains that women feel pressure when it comes to their sexuality from first dates to talks with parents.

Due to these expectations, women can end up tearing each other down.

Lindsey Zawilass, University alumna and former volunteer and FYCARE facilitator at the Women’s Resources Center, said she experienced slut shaming from friends and family, despite it being delivered in a joking tone.

She explains that family members would comment on how short her skirts were, how friends would sexualize her body and how strangers would ask how many sexual partners she had.

She was even slut shamed when she was a part of the mock trial team here.

“The coaches said something along the lines of, ‘We don’t want you to dress like a slut,’” Zawila said.

McLay said a form of slut shaming that people may not think about is victim blaming with sexual assault.

People question what the victim was wearing, if she was drinking, or overall, if she was being reckless when she got assaulted.

She explained that the prevalence of slut shaming is due to the fact that we live in a patriarchal society.

“In so many sex-ed classes, women are depicted as the gatekeepers to sexual activity. And in many sexual assault programs, it’s about how women can keep themselves safe. There’s this media spotlight on women whereas men can do what they want,” McLay said.

Letofsky said that men take pride in their sexual encounters and can slut shame women regardless of engaging with them physically.

Letofsky also explained that slut shaming can indicate a discomfort when it comes to sexuality.

Zawila thinks that people need to be more respectful toward women and their personal choices.

“Anyone who sleeps around a lot is probably doing it out of self-esteem issues. People need to be more understanding. It’s a personal choice, and there is probably a bigger issue there. Respect people’s decisions,” Zawila said.

Letofsky also explains that gay and lesbian individuals can face slut shaming more than heterosexuals, simply because of the stigma attached to homosexuality.

She advises that students of all sexualities embrace who they are.

“Call (slut shaming) out. Be proud of who you are. Own your sexuality. If you’re someone who sleeps with a lot of people, you don’t need to be ashamed. Don’t hide who you are,” she said.

McLay agrees that there needs to be a level of respect given to all people and their sexualities.

“A big thing is just having empathy and thinking critically about what you are thinking about a person and what could be contributing to this thinking. Ask yourself, ‘How might I think of this differently and help others to do the same?’” she said.

McLay also said that women need to help each other out when it comes to slut shaming.

“See other women as allies and resources and friends and not competition. It’s the best way to stand up for each other and stop slut shaming,” McLay said.