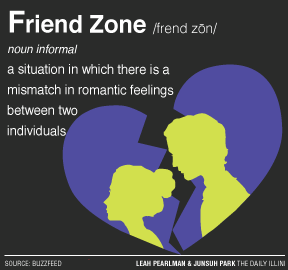 From the MTV show “Friendzone” to music artist The Weeknd’s line, “I’m just trying to get you out the friend zone” in “The Hills,” friend-zoning has become a commonly used phrase in society today.

Described as a situation where one friend has unrequited feelings for another, the term may seem innocent; however, Molly McLay, assistant director of the Women’s Resources Center, said the term has some negative connotations.

“My understanding of the friend zone is that a person, usually a guy, thinks that if they’re nice enough to a girl that they are entitled to sexual relations with someone, just by virtue of being a nice guy or friend,” McLay said. “If the person isn’t willing to have sex with them, then the person is in the friend zone. It puts the responsibility on the person rebuffing the advances. They’re the problem and the reason that this has happened, rather than acknowledging the possibility that a woman may not be interested in a man that way. She could just want to be friends.”

McLay said while all genders can get friend-zoned, men are more vocal about this placement in a romantic interest’s life.

“Men are the people who push for sex and the women give permission. It’s predator (and) prey. It’s the woman’s job to give in. If a man is nice enough, forceful enough and keeps pushing for it, a woman will give in and have sex with them. It’s a ‘woe is me, pity me’ kind of thing,” she said.

McLay thinks this thought process can be considered emotional coercion, and contributes to rape culture through guilting women into sexual acts and dating.

Rebecca Baron, senior in LAS, wrote an essay about the friend zone and the concept of the “nice guy” for McLay’s C.A.R.E class. In the paper, she said she believes nice guys think they are entitled to sex and a relationship. Baron also researched popular culture and how it depicts the friend zone.

“The media portrays the advantage on the side of the nice guy, like Ross from ‘Friends’ and Severus Snape from the ‘Harry Potter’ series,” Baron said. “Everything Snape has done is excusable because he liked someone, and she didn’t like him back. It’s bashing the woman.”

Baron feels that gender politics play a role in the concept of the friend zone.

“Our society is conditioned toward men having to be the ones pursuing women. They become friends with women, and once they ask for more, they are shocked that the women just want to be friends with them,” she said. “It’s also that men are the ones who have to be having sex, be the alpha male and be masculine. When women reject men in the capacity that they were being too nice, it is being less masculine. There is this ‘pride’ thing there.”

Because of how society conditions men and women, women can get attacked for not giving in to a male’s sexual or romantic interests.

“(The philosophy is) ‘You should accept what men are giving you. If a guy likes you, how dare you not like him?’” Baron said.

McLay also explained that there is a common stigma behind “the nice guy.”

“The idea that nice guys finish last is a thread through the friend zone. A woman doesn’t want a nice guy; they want a bad boy. All genders do buy into that idea, but I think it’s especially prevalent that men think this about women, rather than acknowledging a person’s autonomy about who they want to be friends with and engage with sexually,” she said.

Despite the friend zone being a challenge, Taylor Stortz, freshman in AHS, experienced an instance when her friend “left the zone,” so to speak. Stortz had been friends with her current boyfriend for two years in middle school before they started dating when she was in high school.

“He was a really sweet guy and was very persistent with me, and I knew that he must have cared since he was not giving up,” Stortz said.

Stortz said her boyfriend was friend-zoned because she did not feel attracted to him and she thought it would have been weird to transition into a romantic relationship. However, as the two grew closer, she changed her mind. She said her boyfriend never complained about being in the friend zone while they were just friends.

Stortz believes there are a few reasons as to why people are friend-zoned.

“I think sometimes they are afraid of hurting people and letting them down,” Stortz said. “I also think that once you have a long-term friendship, it is hard to imagine that friendship as something romantic.”

“When we started dating, it felt like we had been dating for three years already. The feelings only intensified,” Gan said.

Gan believes dating his best friend was a natural step in the progression of their relationship.

“In a way, it was inevitable. Once you feel that way about someone, you can’t not act upon it, because you’re scared of what will happen. You have to be very conscious of what you are looking for in that relationship before making moves,” he said.

Gan said he never saw himself in the friend zone and does not like the term, over all.

“You’re setting expectations for where you think the relationship with the other person will go. Those people (who use the term) don’t really respect that the other person doesn’t want to be in that situation. It’s a complaint in disguise. You start to forget what made the friendship so great to reach that point in the first place,” Gan said.

He described the term “friend zone” as making a “friendship seem unpalatable” and that rejection is a “fact of life.”

Baron feels that society can work to combat the friend zone.

However, McLay said there is a way people can not only escape the zone, but avoid the term entirely.

“There shouldn’t be an expectation when people become friends that there is a sexual relationship. If a mutual attraction happens, great, but if there is an expectation, then that person isn’t being a nice friend,” McLay said. “People need to think, ‘Am I trying to get something out of this or content with being just friends?’ The idea of the friend zone is a heteronormative concept: the assumption that a man is only friends with a woman to get with her. Not all men are interested in women in that way.”