The i>clicker: A decade later 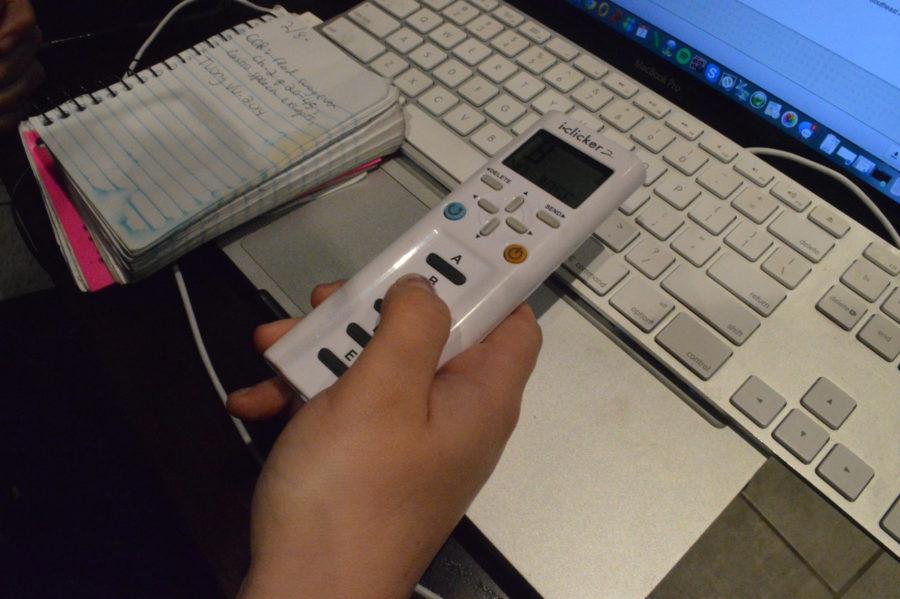 The University of Illinois is known for inventing the iClicker, which is now used at many colleges across the country.

It’s a simple device. Depending on the version, it only has six or 13 buttons. Sometimes it has a small screen. It doesn’t connect to the Internet, yet many University students take it to lecture every day: It’s the i>clicker.

Jamie Nelson, senior eLearning professional at the Center for Innovation in Teaching and Learningss, estimated that hundreds of faculty and half of the student body have used or currently use the device across campus.

Due to its popularity in lectures across the University, the Center for Innovation in Teaching and Learning will hold a workshop for faculty on Feb. 12 from 2-3:30 p.m. at Armory 428ss. The purpose of the “Teaching with Digital Tools” training is to instruct professors on how to effectively use the response system.

Nelson has been supporting faculty in the use of i>clickers since the response system was implemented at the University in the mid-2000s. Nelson said that the device is easy to use in class, but there are a lot of details and best practices about which professors need to learn before integrating it into their classes.

“It’s not the best way to use it just to take attendance,” Nelson said. “Students don’t like that; I don’t promote that … So you can see if people are participating, but let’s turn this around. Let’s use this for the right reason, not just for pressing ‘A’ if I’m here or something like that.”

Nelson said there are many ways of effectively utilizing the i>clicker in classes: to facilitate discussion; to test preexisting knowledge; to ask anonymous questions; or to quiz students on the material taught, where instructors can give points to correct answers or simply to student participation.

The i>clicker was developed at the University with the purpose of making large lecture courses better. Tim Stelzer, associate professor of physicsss, was teaching a big physics class in the year 2000. At the time, response systems already existed, and he was using one through Texas Instruments.

“The department of physics actually invested in wiring one of the classrooms … so (students) could plug their Texas Instruments calculators into it and vote that way,” Stelzer said. “They had to download software into their calculator. The idea was great, but the logistics of it were just a nightmare, so you spent all your time dealing with logistics and none of your time thinking about physics.”

After that experience, Stelzer teamed up with Mats Selen, professor and associate head of the department of physicsss; Gary Gladding, professor emeritus of physicsss; and Benny Brown, a graduate student at the timess. They started developing a response system that would be simple and inexpensive to use.

Stelzer said the University was incredibly supportive, and the Office of the Provost helped fund the project.

“It was really because we’re at the University, and so we have a lot of respect everywhere,” he said. “When we talked to a couple of people, and they heard we had done this, they said, ‘Yeah, we are interested.’”

Selen said they worked on the project for about five years and went through several prototypes to improve the device’s range and functionality until the publishing company Macmillan bought the i>clicker in 2005.

“The short, sort of interesting, salient part is we worked on it for several years, and then somebody else got interested,” Selen said. “They’re the ones who were actually able to create something and market it and have distribution and sell it – all the kind of stuff that you need that you can’t do if you’re just a couple of guys.”

The name “i>clicker” has stayed with the product since its earliest versions. Selen recalled the team’s coming up with it while they were trying to register a domain name for the device. Stelzer said that they wanted to name the device “Clicker,” but it was already being used.

“Someone said ‘IClicker’ for Illinois, and we had a capital ‘I,’” Stelzer said. “Then the publisher said ‘i>clicker’ is good but (with a) lowercase ‘I.’”

After about a decade since its release into the market, Stelzer said he still thinks the i>clicker is the right tool.

“Even as much as technology has advanced in 10 years, this original design is really the best tool to use for teaching … because, if you look at this, there’s absolutely nothing to be distracted about,” he said. “It’s the most boring piece of material you could have, and that’s actually the key because as soon as people start thinking about the clicker, then they’re not thinking about the content.”

Both Stelzer and Selen still use the device in their classes. Selen said he finds it cool that some students have the first version of the i>clicker, and those devices still work well.

“It’s happened to me a couple of times that a student has asked me to autograph their i>clicker, which is really silly, right?” Selen said. “Before the first time it happened, it was the farthest thing from my even imagining something like that ever happening.”

Stelzer acknowledged that students have varying experiences with the device because instructors use the i>clicker differently.

“It’s like any tool; it can be used to enhance an experience or destroy an experience,” Stelzer said. “I think if you talk to students, they will have experienced both or one or the other.”