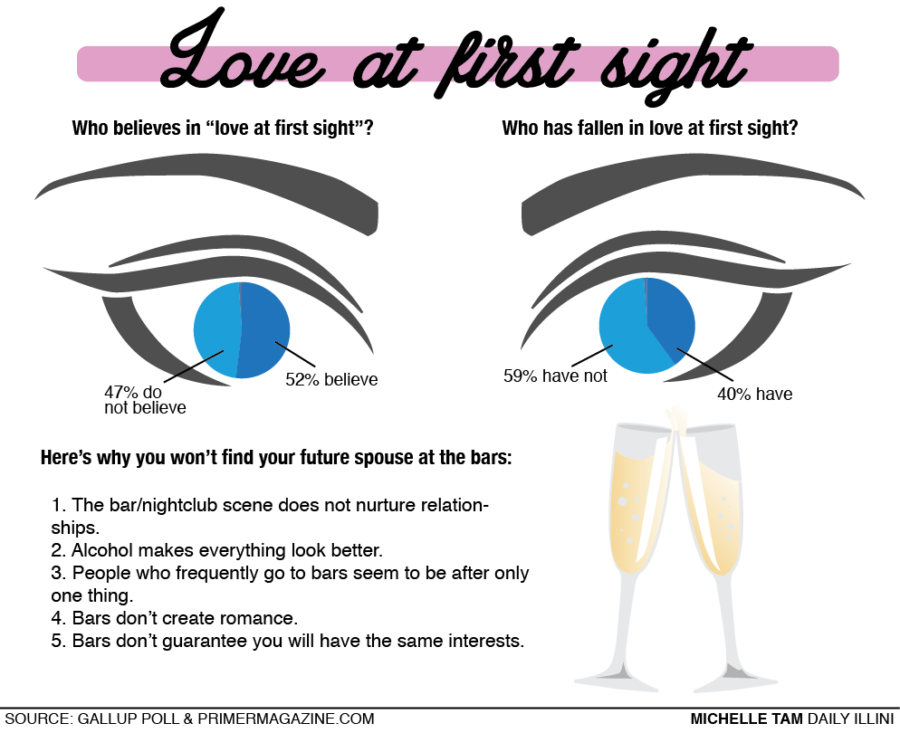 Michael Hoare, University alumnus,JT met his girlfriend of two years at none other than the local campus bar, KAM’S.

“I had seen her earlier at a pre-game and just briefly introduced myself. Later on, she was actually the one who came up and talked to me, so I can’t really take credit for that,” Hoare said. “I’m not really sure what attracted her to me, I’m still scratching my head on that one.”

Randi Clemens, senior in LAS,JT also met her significant other at a bar and has been dating him for the past six months. The two met at Murphy’s on a bar crawl.

“(He) knew the friend I was sitting with and came and sat across from us to talk to both her and me. I just thought he was cute and that he was really outgoing,” Clemens said.

The idea of “love at first sight” is a topic that frequents fairytales and movies alike. It’s also a topic that Veronica Hefner, University alumna and now assistant professor in mass communication at Georgia College,JT has studied. Though many University students find their significant others at campus bars, Hefner wrote via email that she does not believe in the existence of love at first sight.

“I do not believe in love at first sight, but I do believe in attraction at first sight. Sometimes people can confuse the two. Love is a deeper connection that also includes commitment, trust and intimacy. You can’t get that in a moment,” Hefner wrote.

Hefner explained that people are attracted to symmetrical features and certain scents. Studies have shown that men are attracted to curvier women, and women prefer men with a muscular “V-shape” body. She has also conducted research when it comes to online dating profiles.

“I did an experiment looking at online dating profiles and what people find attractive. Turns out, people are attracted to idealistic statements, such as, ‘I’m looking to fall in love the moment I meet you,’ and this finding was enhanced by those people who already watch a lot of romantic media,” Hefner wrote.

Hoare sees both pros and cons to finding a partner at a bar.

“I think you can argue that meeting someone at a bar is just as good as meeting anywhere else. Drinking for couples our age is a big pastime, so if you like doing that together, you have already won half the battle,” Hoare said. “The pros is that it’s easier to talk to someone you otherwise wouldn’t, but on the flip side, it could make for an awkward morning if you don’t go about it the right way.”

Clemens agrees with Hoare that a bar has a very relaxed atmosphere to meet someone, but that it isn’t exactly the typical scene of romance.

“I think a pro would be that you’re in a really informal setting, which makes it easier to talk to new people. And I think a con would be that whenever people ask how we met, and we say that it was at a bar, it doesn’t sound very cute or romantic,” she said.

Hefner wrote that, more often than not, lust is found over love at bars.

“Certainly alcohol, level of fatigue, and also how a person is dressed can all contribute to attraction. But most often, bar hookups are based on lust — not love,” Hefner wrote.

For those who don’t believe in finding love at bars, Hoare and Clemens have words of encouragement.

“I don’t think meeting someone at a bar should carry a negative connotation in any regard, especially at our age. Love at bars already exists because we all love drinking with our friends,” Hoare said.

Clemens thinks you can meet a great person no matter the location.

“I would say that though meeting my boyfriend at a bar doesn’t sound ideal, he is still an amazing person, and if you’re open to meeting someone at a bar, then you should try it,” Clemens said.

Hefner believes that any relationship can work, as long as effort is put forth.

“Any two people can make it work if they truly want to. It’s often much easier to choose someone with whom you are compatible, but no personality test on the planet can compare to sheer determination,” Hefner wrote.