From The High Dive to The Accord: An origin of compromise 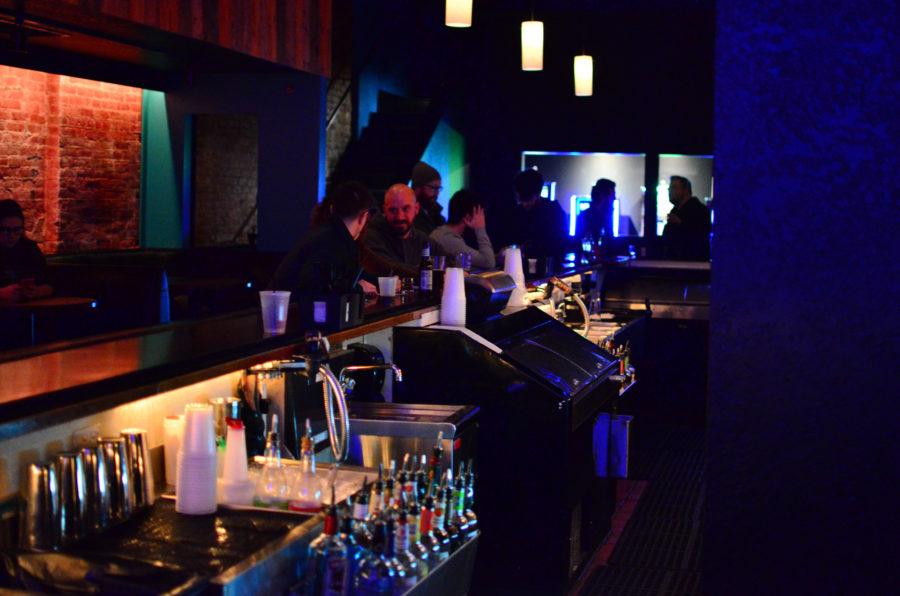 Local patrons enjoy a drink at the Accord during open mic night on Feb. 23.

“Accord” is a Latin-based word that means “compromise,” and that’s exactly how The Highdive was transformed into downtown Champaign’s newest venue: The Accord.

The Accord, formerly known as The Highdive, located on 51 E. Main St. in downtown ChampaignMG, is officially open to the public. After 16 years, The Highdive closed its doors in December, but with a quick turn around, The Accord was up and running by January.

“I think people recognize The Highdive had a really long and successful run as a venue and a club, but it was time for a change,” said Seth Fein, a partner of The Accord and talent buyer.MG

The Accord is an entertainment venue with an emphasis on live music, comedy, panel discussions, author readings and special events. The owners of The Highdive decided that they wanted to rebrand the party venue and provide a space for all types of live entertainment.

“Structurally, the venue is pretty much identical, but aesthetically and programmatically, it is pretty different,” Fein said.

Fein sat down with the owners of The Highdive to come to an agreement about what the partnership would mean and what the new venue would look like.

“We decided the word ‘Accord‘ was representative of what our partnership looked like. We like the way it sounded, and we chose it,” Fein said.

“When it came to The Accord, the partnership made a lot of sense for us because it was something we were used to doing,” Singer said. “With the new venue, it’s in a higher volume with performances and shows on a more consistent basis, so that’s definitely something new for us.”

Singer believes that downtown Champaign has the capacity for a venue that has live performances.

Like The Canopy Club in Urbana, which has been a host of live performances for many years, The Accord wanted to provide a smaller venue for live entertainment. The Accord welcomes all types of musical genres and age groups to its venue.

“We are really interested and open to producing any type of show as long as we feel like performers are good and professional. Whether it’s national or touring acts or local, we’re interested,” Fein said. “We’re not booking the venue for us, we’re booking it for the community.”

The Accord wants to expand the type of entertainment that the venue offers; on Tuesdays and Thursdays, they host local and regional comedians, who provide original comedic acts and routines. They plan to do various author readings where authors can come and read excerpts from their books.

“We just want to be a really excellent space for performers to feel they are being treated as the artists they are,” Fein said.

As far as the University goes, The Accord openly welcomes any registered student organizations that would like to rent the venue for entertainment. They realize that their venue is located in a college town, so they want to appeal to students.

Fernanda Schaefer, sophomore in Media, attended a comedy show at The Accord last January. Creed Bratton, a supporting character from The Office, headlined the event.

“It was a good experience,” Schaefer said. “I enjoyed the ambiance.”

The crowd has been the greatest factor of transition from The Highdive to The Accord. Instead of hosting parties every weekend from 10 p.m. to 2 a.m., The Accord may have a dance party after a ticketed show.

“A lot of people may not realize The Highdive was a live music venue in the early 2000s. It’s nice to be able to transition into that sort of focus for this venue,” Singer said.

Fein said The Accord is ready to put its new brand in action.

“We want to have a place that people can come to and have a good time but come to a higher level of professionalism than anywhere else,” Fein said.