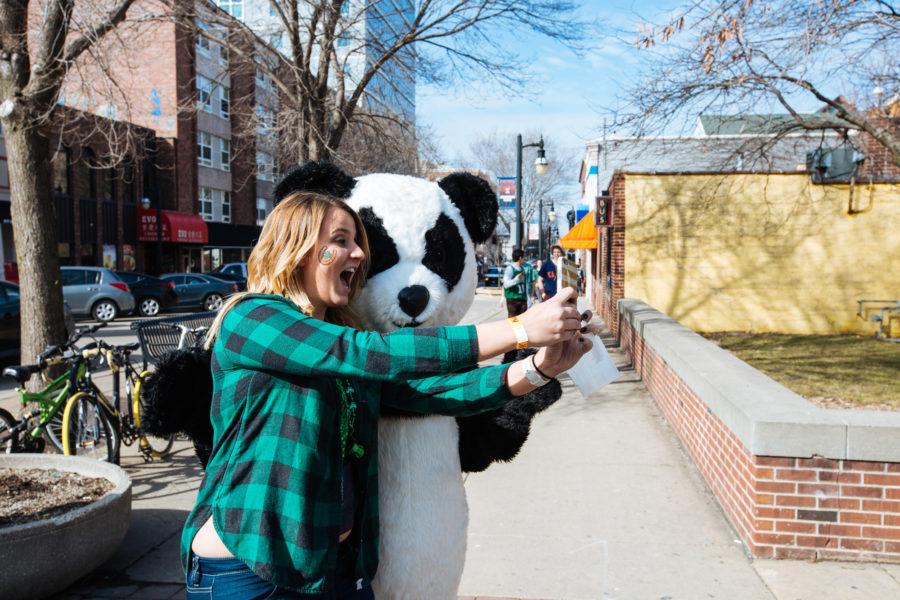 A student takes a selfie with the panda on Unofficial, March 4, 2016.

Angela Coco,AG freshman in ACES, decided to forego arguably the biggest event of the semester at the University and her very first Unofficial due to concerns for her personal safety.

“I didn’t think that there were very many plans, and I would rather go home than risk getting in trouble,” Coco said.

Coco heard from older friends that if one didn’t have solidified plans for the day, that it wasn’t worthwhile. But she did see some drawbacks in leaving campus for the weekend.

“I will miss out on making memories with my friends and pledge class,” Coco said.

Coco was not the only Illini who decided to skip out on Unofficial St. Patrick’s Day, which took place last Friday.AG

Brianna Garland,AG sophomore in Media, considers Unofficial to be a letdown compared to a normal night out at the University. She participated in the event last year and was disappointed.

“You would figure it would be something more fun than normal. Any normal night would have been so much more fun,” Garland said.

Garland said that a lot of her friends also went home, and she decided that it would be best that she spend time with her family and get her work done in a quiet environment despite the three hour drive home. She said more than likely, she will not be participating next year either, but it is up for consideration because during her senior year.

“I plan on studying abroad next year, so I won’t be here. Senior year, I’ll probably participate because I’ll be 21 and of age of participation. If it were that I was going to be here next year, I would probably go home too,” she said.

Garland and Coco are not the only students who didn’t participate this year. Jake Winkler, AGaccount executive and customer service manager at Peoria Charter, AGexplained that he didn’t really notice an increase in bus ticket sales this year, but that more people were asking about ticket prices and options.

Overall, about 600 bus tickets had been purchased by late Thursday afternoon. Winkler said that Peoria Charter recently had a Leap Day promotion in which they strongly encouraged customers to grab their tickets back home for Unofficial weekend and Spring Break while they had a discount.AG

“We had over 1,500 tickets booked in one day, and usually it’s closer to 300 or 400, so people definitely took advantage of that,” Winkler said.

Winkler went on to say that one of the benefits of taking Peoria Charter back home instead of driving themselves is that students won’t have to personally deal with in and outgoing traffic.

Although Coco went home this Unofficial, she said she is planning on celebrating next year.

“Next year, I think I will stay on campus for Unofficial because my pledge class will be more experienced with how to be safe and make good decisions while having fun,” Coco said.

Despite recognizing the necessity of increased security and regulations, Garland explained that this could make it harder to enjoy Unofficial.

“Bars are always going to be 21, and the police are going to be strict because it’s a big safety issue, especially when people from other schools come,” Garland said.

However, Coco was looking forward to her mom’s home cooked meals and spending time with her puppy, so she didn’t feel any regrets about not sticking around this year.

“My mother is cooking amazing meals, I get to spend time with my family (and I) get to see my puppy,” she said.