A night in the Cracked food truck 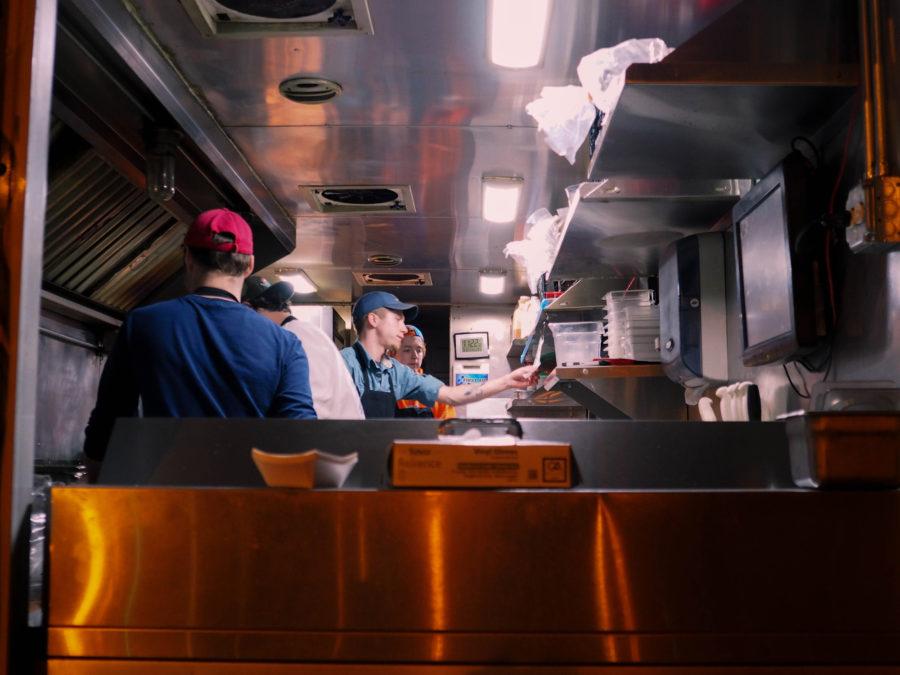 If you have ever been to Joe’s Brewery or have walked down South Fifth Street at night, you have probably seen the Cracked food truck.

Known for its savory breakfast selections, the truck is a campus favorite for late-night eating. When students receive their fresh-off-the-grill Morning Bender, they don’t realize how much goes on behind the ordering window.

On March 31 the four men in the truck, all dressed in casual clothing and aprons, are assistant general manager Dylan Anderson, night manager Mike Brown, Daniel Vermillion and Eric Cain, who is working his first night on the job.

At 11:30 p.m., the guys are standing at their stations and blasting rap music. Vermillion is preparing eggs and tater tots, Cain is manning the window, Brown is working the grill and Anderson is in charge of the expo station where he delivers food to the customers.

The truck is tiny, with the grill and cooking stations on the wall opposite the window. On the grill, Brown has slices of bread and bacon sitting, waiting for a hungry customer to arrive and order a sandwich.

As the smell of fried potatoes fills the air, Brown explains that he sets up the bread and hash browns early as a means of efficiency. Next to the grill is the truck’s cooler, where the condiments and toppings are stored, making it easy to put together orders. Weekend nights are the busiest for Brown, who works six nights a week. Even though the total of 14 workers at Cracked are trained to be able to work any of the food stations, Brown finds the grill to be his favorite because it keeps him focused.

Despite loving the grill, Brown has no cooking background. “This is the most I’ve spent in a kitchen area my entire life,” he said.

By midnight, the truck starts to see more customers waiting in line. Brown said that sometimes the quaintness of the truck can weigh on the workers when they are under pressure in such tight quarters. If the person manning the grill does not hear the order from the window or expo worker, a touch screen by the cooler shows the order from the register’s computer system, making it pretty impossible to mess up.

And it doesn’t just get hectic inside of the truck. Cracked is situated outside a fraternity and bar and is a few steps away from Green Street, so the guys see a lot of interesting behavior.

“People cut lines. We deal with a lot of intoxicated people,” Brown said. “It’s always ‘how drunk are the people going to be tonight?’”

Vermillion agrees that intoxicated customers can be an interesting part of the job. “It can be hard to take a drunk kid’s order,” Vermillion said.

Anderson has been a Cracked employee for two years and has seen his fair share of “crazy and amazing experiences.”

“I’ve had some people come up and order things not on the menu; others will try to get on the truck and want to work,” Anderson said. “There was an incident where we were so busy that our line blocked an alley way and police got called for crowd control. That was pretty exciting. Most of the time, the crazy just comes from the customers.”

Vermillion, who has been an employee for six months, said witnessing his first Unofficial has shown him how crazy University students can get.

“I’ve never seen so many drunk kids in my life, and that tends to make the job crazy. The weirdest thing I saw was people stealing odd items like shopping carts and our sriracha hot sauce bottles,” Vermillion said.

Even though the guys have seen some wild events while working, they revel in the chaos and try to make the Cracked truck’s atmosphere relaxed and welcoming for students.

Vermillion really enjoys being able to DJ the truck. “You don’t always get to listen to your favorite music every night at work. It makes the nights a little easier,” he said.

And all the hard work and effort the workers put in to create this student-friendly zone does not go unnoticed. The guys know who their regular customers are and look forward to bantering with them while they cook their food.

Nick Havens, senior in AHS, has been a Cracked fan since his sophomore year. His favorite menu item is the Sloppy José, comprised of chorizo, guacamole, fried egg, hash browns and homemade bacon onion jam.

“(Cracked is) always conveniently located when I need them the most. Their food is absolutely amazing,” Havens said. “My soul needs the Sloppy José like my body needs oxygen.”

Havens believes Cracked has become a part of campus culture. “I don’t think you’ve truly experienced what it means to be an Illini if you haven’t had Cracked,” he said.

Molly Novotney, junior in ACES, is another regular customer at Cracked. She has been a fan since her sophomore year as well and enjoys that the truck is right outside one of her favorite bars, Joe’s.

“I really love breakfast food. The only inconvenience is that it’s not usually easy to eat on the go, and it’s not always available at all times,” Novotney said.

Novotney’s favorite menu item is the Morning Bender with bacon, which is made out of cheddar cheese, a fried egg, cream cheese and hash browns.

“I love all the cheese and greasy goodness that goes into it,” she said. ”(Cracked) is one of my favorite places to eat and I’ll miss it after graduation next year.”

Although the truck has only been open for a little less than five years, it has accumulated a large following. As the assistant general manager, Anderson has really gotten the chance to see Cracked grow.

“We are running more efficiently as a company and are able to put out food quicker while still providing a quality product,” Anderson said. “Personally, I have learned a lot about the process of starting and operating a business in the food industry and have seen the company grow into what it is today … We are able to handle larger crowds and sell more food now.”

Anderson enjoys being a part of the administration. “I play a part in nurturing our future success. It’s cool to be able to brainstorm ideas and see them come to fruition,” he said.

In contrast to Anderson’s years of work experience, Cain had just finished his trial period at Cracked and was able to become an official employee Thursday. Cain said the night really wasn’t that strenuous for him, but he did have to learn how to set up all of the different sandwich orders.

“I really am familiar with food service jobs. It was a lot of the same stuff, just in a different setting,” he said. “But I like the atmosphere a lot more than my other jobs I’ve had so far.”

He also had no issues with University students. “The customers were honestly easy to deal with,” Cain said.

Even though Cain, Brown, Anderson and Vermillion are not University students, Anderson said students are welcome to approach the truck and ask to apply to work; the application is via email, and a prospective Cracked employee must go through a trial training period before being officially hired.

“It doesn’t work out for everyone,” Anderson said.

While working the night shift can be draining, the guys all seem to love their jobs.

“There is this stigma that it sucks to work in the food industry, but it’s the exact opposite. It is stressful at times, but it is very rewarding to be able to serve and to make people happy,” Anderson said. “It’s not all work when you love what you do. There’s a lot of love and pleasure that comes from serving, not just in the food industry, but in all aspects of life.”