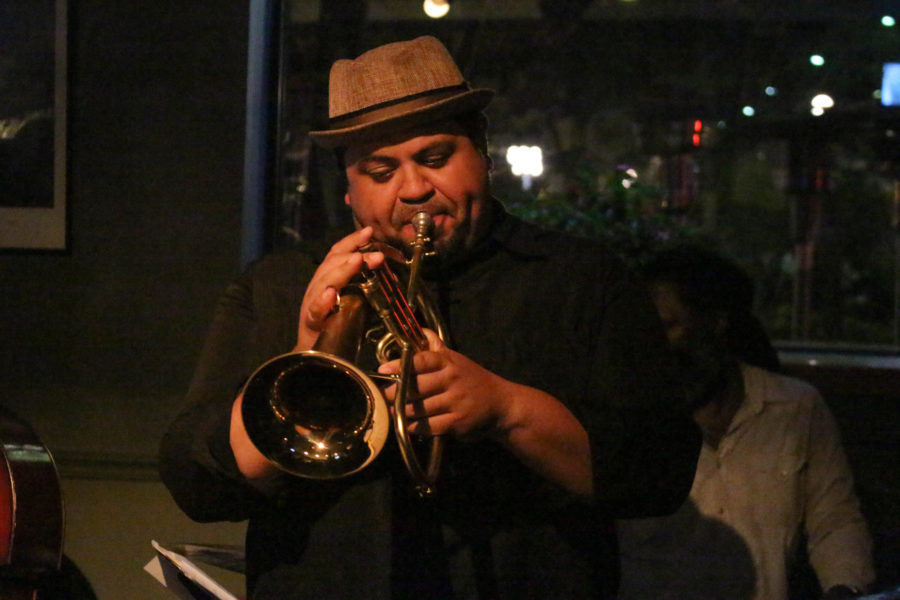 Tito Carillo plays in the Utopian Songwriting performance at the Iron Post in Urbana on Friday, Apr. 8

As the humming of people filled the Iron Post on Friday, their spirits seemed to already be permeated by the energy of the music that followed. They gathered to revisit the songwriting of jazz musicians from Brazil’s military dictatorship.

The event, called “Utopian Songwriting,” included notes given by University professors Marc Hertzman, Mark Steinberg and Michael Silvers. Each used his own expertise to examine the impact of Utopian songwriters and political activism during Brazil’s military dictatorship in the 1960s.

“There was something happening in the 1960s worldwide, which has its own particular quality. That includes student movement here, in France, and even what was going on in the Soviet Union,” said Steinberg, professor in the department of History and coordinator of the Global Utopias program. “It was a sudden revival of sense of possibility, not just recovering the old world, but really a chance to think boldly.”

In the 1960s and 1970s, Brazilian songs and songwriters played a pivotal role in mobilizing student movements and activism against the oppressive military dictatorship.

“Jazz was very popular all the way up to the ’60s, and that’s when we see a larger connection between social movements,” said Marcelo Boccato, who is pursuing a doctorate in jazz studies. “We had a really strong connection in the ‘60s with the civil rights movements and jazz.”

Boccato played the piano at the event. He said holding these types of events is important for centering music within its cultural and historical context. Boccato also said he believes this historical background enriches the listener’s understanding and connection to the performance.

The music played at the event was written by many influential political activists such as Geraldo Vandré, Chico Buarque and Milton Nascimento.

“A lot of times, folks were not nearly as explicit or confrontational with music, but in that song itself and in the larger student movement, you can see a distaste for the military government which is oppressing people that they don’t agree with,” said Hertzman, assistant professor of history specializing in Latin American and the Caribbean.

“The importance of musicians being on the front line at the student movement, being right there putting their bodies on the line along with the students. I think that has an immeasurable impact. They’re not just singing it.”

Hertzman said Vandré changed the way music was perceived during this time through his confrontational expression. Vandré also showed the world that music can be employed for political change.

“There is a larger utopian movement in the 1960s where there are people mobilizing globally. This is clearly a moment where there are things happening all over the world,” Hertzman said. “This music and movement were linked up with a larger global process and desire for new ways of doing things.”

Both the student protesters and songwriters embodied the idea of utopias, which Steinberg’s program examines.

“Something is happening now which is part of the same atmosphere we live in where people feel like it’s not enough to just say this is the best we’re going to ever have,” Steinberg said. “And this is Utopian, not in the sense of wild-eyed idealism, but rather a bold statement that says the world is not enough as it is and proposes new ways of thinking about possibility.”

He said some people put the broad ideas of Utopian thought into what he calls an “everyday Utopia,” an approach that focuses on building alternative communities and havens locally rather than remaking politics and institutions.

“And in some ways music does that,” Hertzman said. “It’s a place, it’s a time, it’s a moment and space to really feel the emotional liberation of being in a space that’s removed from the rest of the world in hopes of rebuilding it from the bottom up.”