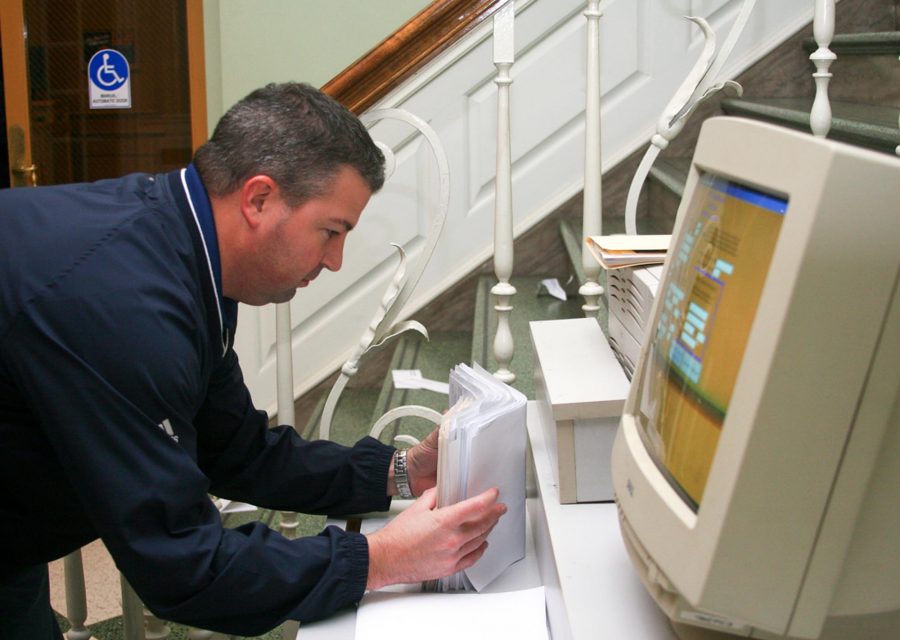 Champaign County Clerk Gordy Hulten collects and sorts the final voter registration forms for an election in the southeast corner of the Union.

For many incoming freshmen, this November will be the first time they will be eligible to vote.

However, because quite a few students’ permanent addresses aren’t on campus, they may have issues when they go to the polls.

Quad Day will provide students with an opportunity to update their addresses and to register to vote. Student and community volunteers will be at the Illini Union from 11:30 a.m. to 4 p.m. during Quad Day to register anyone eligible.

The event is being organized by the Illini Democrats and the Champaign County Young Democrats.

“Democrats and democratic campaigns have taken advantage of the tremendous opportunity Quad Day presents for decades — for as long as anyone can remember,” said Evan Keller, Illini Democrats president and senior in LAS.

The history and benefits of student-led registration events is well known by some of the community volunteers who have seen the effects of student voting.

“Ever since I headed up Student Voter Registration 40 years ago when I was a student, I’ve seen a consistent pattern of great voter turnout in campus precincts whenever an organized effort is made to register and update students’ registration and much lower turnout when there is no organized effort,” wrote Esther Patt, Urbana resident and one of the event’s community volunteers, in an email.

Any student living on campus or commuting within the immediate area for the semester is eligible to vote in Champaign County.

“All that a student needs to know to register is the last four digits of their social security number or their driver’s license and their campus address,” Keller said. “It’s easy and takes less than a minute.”

Even if students think they are registered, other issues can impact voter eligibility.

“Many students miss voting in an election because they register back home and have trouble with absentee voting, or they are registered at a former Champaign-Urbana address,” Patt wrote.

“Every time you move, even within the same city, you have to update your voter registration address — and it’s free to do so.”

“I think people just forget,” said Aline Sredni, communications director for Illini Democrats and senior in LAS. “I think it’s something that’s in the back of people’s minds to vote. I just think people put it off because everyone is so busy.”

The election season has seen an active push from younger voters, particularly from the “Feel the Bern” campaign. However, the final impact will be seen at the polls, and students shouldn’t underestimate their power, Patt wrote.

“The impact on the community of U of I students voting locally has primarily been more votes for Democratic candidates,” she wrote.

“In county-wide and state legislative elections, Democratic candidates do much better in presidential election years when lots of students vote locally than in the off years when far fewer vote.”

“Back in 1973, after the 26th Amendment lowered the voting age from 21 to 18, Urbana’s municipal government switched from majority Republican to majority Democratic and has stayed Democratic.”

Students should also consider the impact they have on the rest of the community, as they make up one-third of the population, live here for most — if not all — of the year and pay local taxes, Patt wrote.

Of course, this election year holds more national importance than a typical election.

“This event is crucial because, for the majority of the students, this is their first opportunity to vote in a general election,” Keller said. “This election, they can contribute to helping defeat Donald Trump and electing the first female president in our nation’s (history).”

Sredni will be voting for the first time in this election despite being very politically involved since high school.

She is originally from Brazil and moved to the U.S. with a green card when she was 10-and-a-half years old.

Her citizenship was finalized this past March. “I couldn’t even vote in the primaries,” she said.

Sredni joined Illini Democrats and other political organizations as a way to back her beliefs, support her party and have her voice be heard.

“Our main goal for the event is to register as many students as possible. The more students vote, the more their voices are heard by their representatives,” Keller said.

“We’re expecting 50 or more students and community members to be registering voters on Quad Day. Our goal is to register 2,000 students to vote.”

Though there have been no widely publicized registration events organized by other local and University political party groups, all students can register at the event regardless of personal political affiliation.

“It’s important for everyone to cast their vote for whoever they believe should be the next president,” Sredni said.