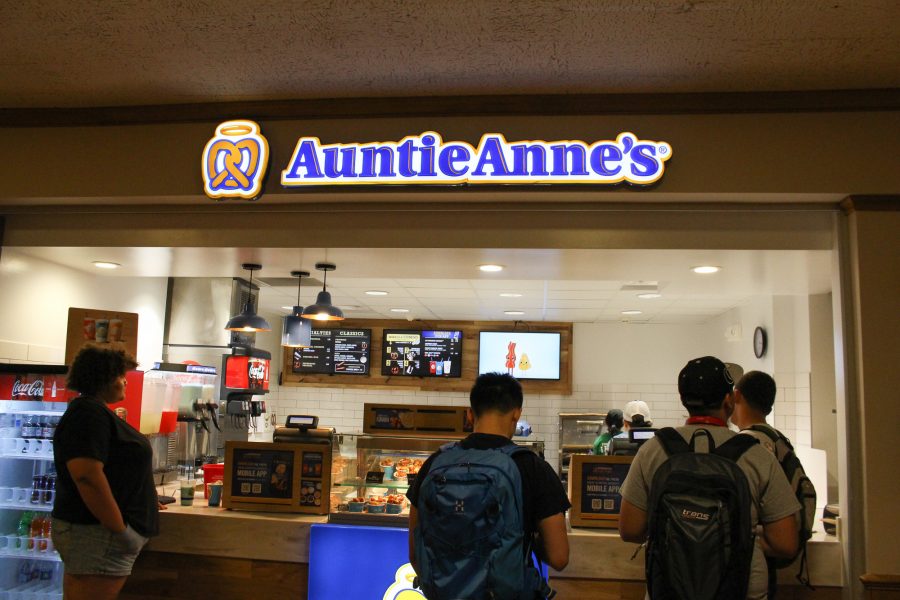 Students wait in line fir food at Auntie Anne's in the Illini Union on Tuesday, Aug. 23

The sweet and savory smell of cinnamon pretzels motivated Kyla Offord, sophomore in DGS, to wait in the lengthy line at the new Auntie Anne’s on campus.

“The line is super long; everybody is excited to get something sweet,” Offord said.

Offord joked that because Auntie Anne’s is conveniently located in the Illini Union, she is going to “gain a lot of weight” because the food smells and tastes so good.

This month, Auntie Anne’s opened in the Union and has already gained popularity. The soft pretzel vendor, which replaced Quad Cones, is located in the southwest corner across from Jamba Juice and the Illini Union Tech Zone on the main floor.

Lori Holmes, Union-dining coordinator, explained that the restaurant was chosen because of an annual survey based on student preferences.

Every year, the Illini Union reviews a survey that is sent to the student body.

“This survey serves as a tool to identify those concepts or vendors that the student body would most like to see in the Illini Union,” Holmes said.

According to Holmes, the surveys from the past five years ranked Auntie Anne’s as the most desired snack concept and brand for the Illini Union.

“Auntie Anne’s contains elements most frequently requested in other surveys, focus groups and feedback opportunities, including but not limited to fresh ingredients, made-to-order items and portability,” Holmes said.

Holmes explained that this opening has been a success.

“The student response has been overwhelmingly positive,” Holmes said. “Auntie Anne’s provides a quick, warm, filling snack for students that are not hungry enough for — or have the time — to eat a full meal but need something to keep them going to meet their fast-paced schedules.”

Dexter Ballou, junior in Engineering, waited patiently in line for his pretzel between classes. Ballou explained he was on campus over the summer and first heard the news of the new opening when the restaurant was being built.

“I love Auntie Anne’s, so I am really glad it came over here,” he said.

For many students, the location of the shop is as big a perk as the taste of its food.

“I’m happy Auntie Anne’s is here because it is great food if you want a snack,” said Wolfgang Huber, freshman in Engineering. “It is very convenient that it is located by the Quad.”