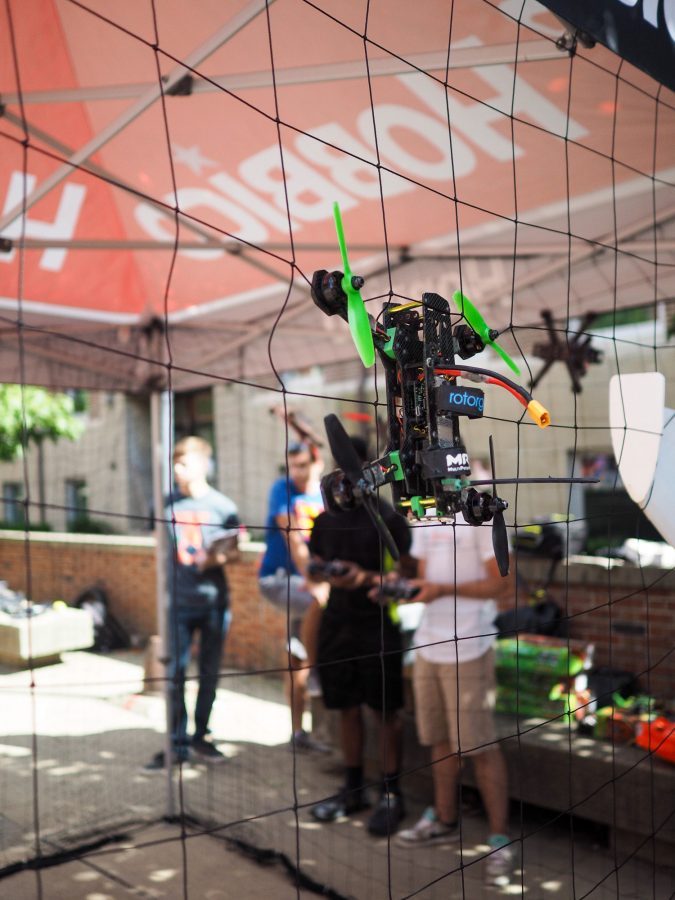 The Illini Drone Club promotes itself via demos where people can test out the drones during Quad Day. Champaign, IL. August 21, 2016.

Students exploring Quad Day may have noticed an unusual booth between Noyes Laboratory and the Chemistry Annex: a large black cage, 10 cubic feet, surrounded by people waiting for their turn to fly the five drones contained inside.

“It’s been a slow build, I guess as all clubs have, but I think it’s been a lot quicker than most,” said Max Goin, founder of the club and University graduate from Molecular and Cellular Biology. “It’s an interesting and cool thing, and definitely very engineering and science-related, which we definitely have a lot of students in those fields here, so that’s kind of helped us out a bit.”

Goin created the club in 2014 after noticing a lack of safety from people operating drones on campus.

“I did see people mishandling them,” he said. “One of my goals was to kind of teach people basically how not to be an idiot.”

The club has to stick to certain regulations, including not flying over people, staying under 400 feet and not flying within five miles of an airport, Goin said.

The nearby location of Willard Airport, plus the campus population, can make it difficult to find a safe space to fly.

“Our No. 1 priority is safety,” said Benjamin Khachaturian, club president and sophomore in FAA. “It’s very serious, and we understand that it’s a big topic.”

Part of the concern surrounding drones is that people are uncomfortable with them, partially because of the association with military use, so another goal of the club is normalizing drones, Khachaturian said.

“I think that as drones have become more immersed in our culture and our lives, we see them solving so many different problems that they have become more acceptable,” he said. “Our goal is to make people more comfortable with drones because it is inevitable that they will be part of our future.”

The Quad Day booth allowed anyone unfamiliar with drones to take a picture, learn more about the different uses for drones and fly a drone with the help of an experienced pilot.

“Even if they’d never flown before, we had a system set up so that one of our members was their co-pilot, and our member had priority control over the new pilot. That just made it worry free for the person trying to fly for the first time,” Khachaturian said.

Goin, who was “buddy-boxing,” said flying at Quad Day had another benefit.

“People can try it out, and really the point is to see whether or not you like it,” he said. “You get to practice on someone else’s dime, which is nice.

When I first started, I broke a lot of things, so it would have been nice to not break my own things, you know?”

Getting into drones can be an expensive but worthwhile hobby, Goin and Khachaturian said. Goin became interested in the hobby after watching a video of two drones racing through a forest in France.

“I was like, ‘Huh, that’s pretty cool,’ and within a week I had spent an ungodly amount of money purchasing all this stuff to start, and I qualify it as one of my best worst decisions financially and overall,” he said.

Khachaturian, who estimated owning five to 10 drones, said spending money on drones is “like buying shoes.”

The drone club is accessible to new members who are unsure about how invested they’ll be in the hobby and don’t own a drone yet.

“What we really want is just a small fleet of things for people to fly that don’t own them themselves, because a lot of people are college students and they can’t really afford to go out and purchase a several-hundred-dollar quad copter,” Goin said. “It is really quite expensive to get started into the hobby, and then once you get started it gets a lot cheaper, but it’s kind of – there’s a huge startup cost, so it’s a big barrier to entry.”

Though many of the club members have drones they are willing to share, the club will be able to provide more equipment this year because of a sponsorship with Hobbico, which also donated the cage and some of the drones for Quad Day.

Hobbico, the largest U.S. distributor of radio-control and general hobby, also has its corporate headquarters based in Champaign.

“They have been really great to us,” Khachaturian said. Goin added that the club had been looking for sponsors for a year, and “Hobbico’s the first to really step up.”

Sean Vig, club member and sixth-year physics Ph.D. student, said the increased interest from hobby companies as well as from students was one of the biggest changes he noticed since the club started. He said the variety of interests has also increased.

“The way drones are taking off as a consumer product means the hobby has much more visibility than it did even just last year,” Vig wrote via email. “Hopefully that triggers additional interest as we kick off this year with the club. There are also a lot of things that can be done with drones that aren’t yet well represented in the club.”

Drone enthusiasts use them for racing, cinema and photography while also improving the technology to issues like transporting medical supplies and assisting search and rescue teams. The drive to solve issues in the world is Khachaturian’s favorite aspect of his hobby.

“One of the biggest benefits to the club have been meeting people that are familiar with the RC hobby and building and flying drones,” Vig wrote. “A close second most important aspect of the club is having a close network of people to fly with. Flying around with friends is way more enjoyable than flying alone.”