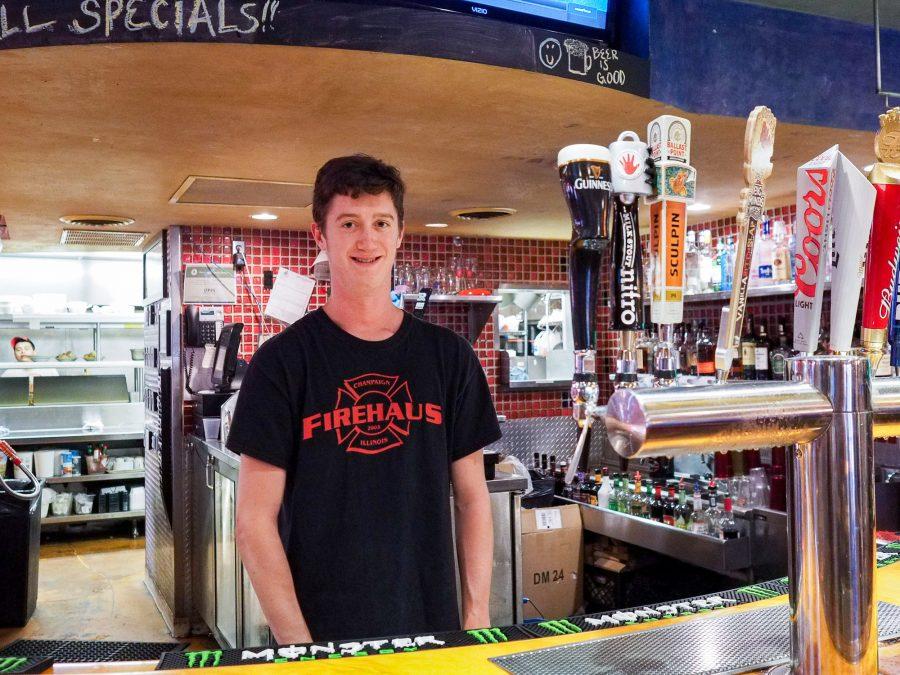 Sixty hours of work a week, divided between bartending at Brothers Bar and Grill and working at the Champaign Country club, is no easy task, especially for Sindi Morsches, junior in LAS.

“I usually sleep about three or four hours a day,” Morsches said.

After a difficult spring semester balancing both school and work, Morsches has decided to take this semester off of school and focus primarily on work.

According to Dan Mann, Director of Student Financial Aid, around 30 percent of University students have on-campus jobs, which earn nearly 20 million dollars annually.

Mann explained that there are many benefits to being a working student.

“Besides earning funds, student employees tend to have higher GPAs and graduation rates. They are gaining work experience that can be added to their résumés which is viewed very favorably by future employers and are also developing time management skills,” Mann wrote in an email. “Student employees are also developing relationships with University staff who often serve as a mentor while on campus and someone who might serve as a future reference.”

However, Morsches explained there can be some frustrations that come with supporting oneself through campus jobs.

“I have to count every dollar I have, and I can’t go out and frivolously spend money like my other friends. And if I’m broke, they don’t understand why because ‘I work two jobs, so I should be rich,’” Morsches wrote. “But they don’t realize that 70 percent of my money goes toward school, with the other 25 percent going to rent and such and the last 5 percent being for food and other necessities.”

According to Morsches, friends will ask her why she doesn’t have her parents pay for her college, but Morsches doesn’t want to be a burden on them, hence why she has taken it upon herself to pay her own way.

Mann stated that it is common for families to struggle to pay for college, but he encourages students to use the Office of Student Financial Aid as a support system.

“It is not unusual for students and families to indicate that they face challenges paying for their education. This is a nationwide concern. The Office of Student Financial Aid would encourage students and families to consider all types of financing options available which includes grants, scholarships, loans and work,” Mann wrote. “In addition, students are encouraged to establish a realistic budget, spend wisely, track expenses and look for ways to reduce discretionary costs.”

Mann also wrote that the Office of Student Financial Aid has a virtual job board that students can utilize to make the job hunt easier.

He explained that a student’s mindset makes financial situations easier.

“A lot of what I’ve been sharing with clients, with families, with students, is to focus on their experience, to focus on what they can do and keep a positive attitude about it,” Russelle said.

He added that though student debt statistics can be intimidating, if the student has a positive attitude, they can overcome student debt.

Russelle advises students to set a budget and have the discipline to live within those means.

To Morsches, it is important that students understand their limits and take care of themselves.

“Having money isn’t worth sacrificing your mental and physical health,” she said.

Mann wrote that student employees are essential for campus success.