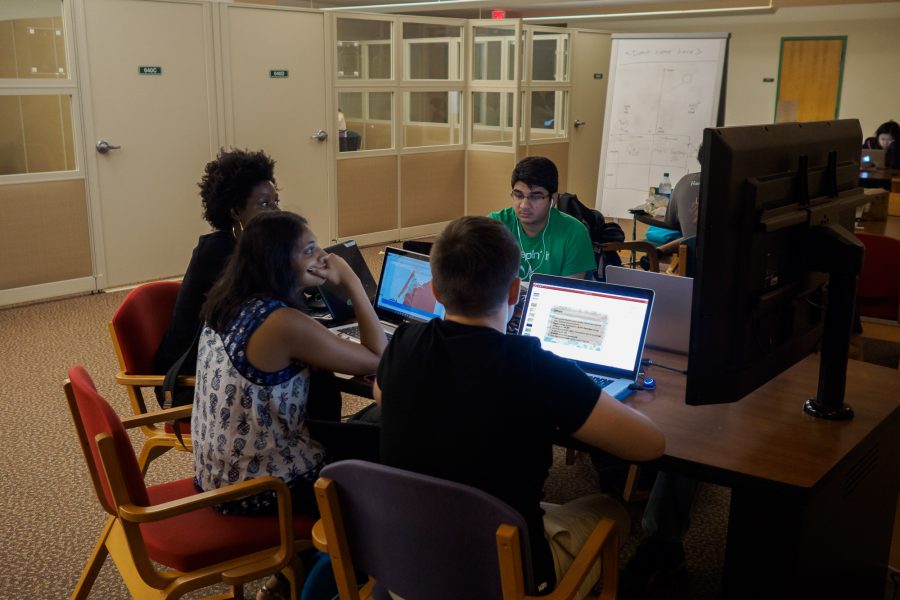 Students build their own startup during the 54.io event held by Founders, an entreprenurial student organization on campus, at the Grainger library basement on Sunday, Sep 25 2016.

A chemistry major, an anthropology major and an aerospace engineering major walked into Grainger Engineering Library on Friday night.

By the end of the weekend, the three students — who hadn’t met before — had developed a feasible idea for a startup and won $500 to help them get their idea off the ground.

Stories like this are the ideal outcome for 54, an entrepreneurship event for University students that helps them connect with people with similar interests and form an idea together for a startup.

This year’s event, hosted by the student group Founders, took place from Friday to Sunday in the basement of Grainger Engineering Library.

Participating students this year have a lot to live up to — last year’s winner of the Cozad New Venture Competition, Amber Agriculture, was founded at last year’s 54 event.

This year, Founders’ goal was to build on that kind of innovation while emphasizing their belief that entrepreneurship isn’t exclusive to students within the College of Engineering.

“Entrepreneurship is not tied to a major,” said Ryan Chen, one of the leaders of this year’s 54 event. “It’s tied to how innovative you are, and how much you want to try something new.”

At the start of the event on Friday, some students pitched ideas, and other students were encouraged to create teams to bring their ideas into fruition.

Osazomon Imarenezor, senior in LAS, pitched her idea for a service that connects hair stylists to clients through a website and app. The service would cater to African-Americans from ages 18 to 25. Imarenezor believes that this kind of service is lacking for this demographic.

Imarenezor said she’s been thinking about this idea for about a year. After her pitch on Friday, she finally had a team. Lucy Chang, senior in LAS, and Max Feinberg, junior in Engineering, decided to work with Imarenezor. Throughout the weekend, they worked on fine-tuning the specifics of the service, which they dubbed Slayd.

The three had only met less than 24 hours before, but they were already comfortable with each other and excited about the possibility of their idea. That kind of passion and excitement is something they said they were all looking for in 54 and in entrepreneurship in general.

“I’m interested in doing interdisciplinary work as an anthropology major,” Chang said. She said she’s been looking to be a part of experiences that would expose her to new opportunities. “I don’t want to dig up bones,” she said.

Imarenezor said she appreciated the fact that 54 forced them to sit and really think.

“It’s really working,” Imarenezor said, adding that her team’s varied interests and backgrounds have made for an engaging experience. Feinberg and Imarenezor tend to look at situations from a technical standpoint, while Chang tends to think about the user experience.

The three said they’re interested in startup culture because of the way of life it provides.

“Everyone is so passionate about what they’re doing,” Feinberg said. “It’s not a chore. It’s always exhilarating.”

Imarenezor said she enjoyed how relaxed 54 was in comparison to other entrepreneurship events she’s seen that usually have restrictions and qualifications.

The participating teams were advised by several mentors that attended the event on Saturday. Imarenezor said the positive feedback her group received was reassuring.

“It’s one thing if one person says they like it, but if two people say they like it . . . maybe this isn’t a bad idea,” she said.

The mentors, who ranged from University professors to founders of companies, had backgrounds in computer science, design, business and more.

On Sunday, the teams pitched their finalized ideas to a panel of judges, and an awards ceremony was held at the Thomas M. Siebel Center for Computer Science.

The top three groups also were awarded access to networking opportunities with venture capitalists and other industry professionals, a software license from JetBrains and automatic enrollment in Founders’ upcoming Startup Bootcamp event.

Imarenezor, Feinberg and Chang said the competition was tough, which made them even happier about their first-place win.

“We’re really excited,” Imarenezor said. “We have the potential to really take this further.”