Students choose to give flu vaccine the cold shoulder 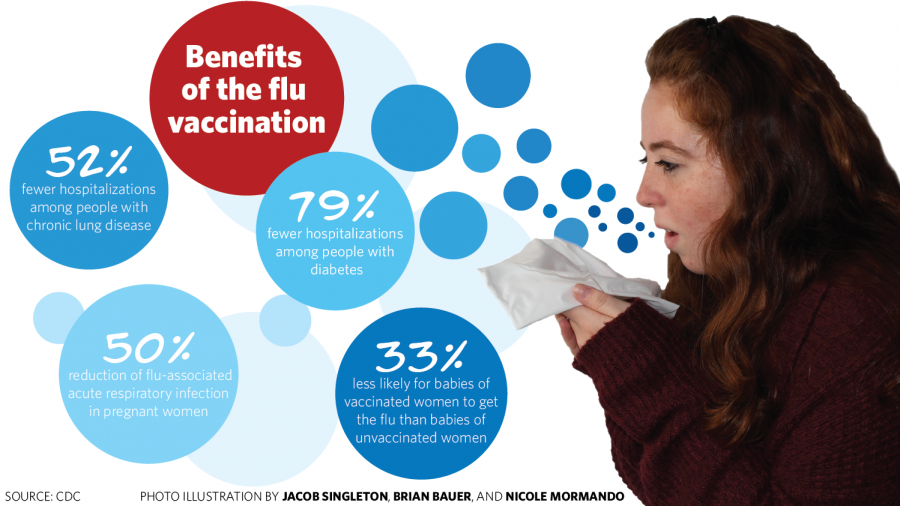 Flu season has officially started. The campus offers many opportunities to get vaccinated, but it is up to each individual student’s discretion if they act on getting the shot.

“There are 25-30 different places on campus in order to make the flu shot more accessible to students,” Burkhalter said. “McKinley realizes geographically we are at a bit of a disadvantage and that it is not the easiest to get to us.”

Locations include the Ikenberry Commons and Grainger Library. Burkhalter said that the Grainger location usually brings in a lot of traffic and provides ten percent of the recipients of the shots. At these outreaches, Burkhalter and three to four different nurses administer the shots. They call themselves the “flu crew.”

Sophie Akin, freshman in LAS, has already received her flu shot at the Ike. Akin is majoring in biology and is planning on going to medical school after graduating from the University.

“I got a flu shot every year my entire life. My mother’s a nurse, so she stressed to me when I was little that I needed to get one. People don’t get them due to misconceptions,” Akin said. “The reasons are scientifically proven to be incorrect.”

Burkhalter agrees with Akin that it would only help students if they get vaccinated this year, especially from McKinley where the shot is given for free.

“Getting a shot keeps the student population healthy. It minimizes the risk of getting the flu sickness all over campus which will lead to students not attending their classes,” she said.

Akin believes that getting the shot is worth it compared to actually contracting the flu.

“People get the flu and wish they would have gotten the vaccine. Both of my parents had the flu at the same time and it was terrible for them. I know how bad it can be,” she said. “It’s one shot, so I don’t know why you wouldn’t get one to not get that illness.”

Akin does stress that everyone has the right to what they choose to do with their bodies.

“I don’t think anyone should be required to get one,” she said.

Burkhalter said that people have the right to forego the shot, but believes that it is beneficial overall for a person to get one.

“If you weigh the discomfort of the shot and an aching arm compared to the flu, I still can’t see why you wouldn’t get that shot,” Burkhalter said.

Even though Burkhalter and Akin are supporters of the vaccination, not everyone on campus is convinced of the pros of the shot.

Sarah Patrick, freshman in LAS, has never gotten a flu shot and does not plan on getting one in the future.

“My mom is super against them. She’s very homeopathic. I kind of adhere to that,” Patrick said. “ A lot of people who get flu shots still get sick. They only prevent certain strains. “

Patrick explains that she does still get vaccinated and is not anti-vaccine, but just does not partake in getting the optional flu shot.

“A lot of the times you get flu-like symptoms. Other times it can be adverse reactions to the version of the virus that they put into your body,” Patrick said. “You can feel feverish afterward.”

Frances Welch, former Illini Media Company employee and senior in Media, is also against receiving the flu shot. Welch has only gotten the shot once in her life and ended up getting the flu that same year.

Welch said she never received the vaccine growing up, which set the grounds for why she doesn’t get it now.

“I started doing my own independent research. There are a lot of studies that prove that it doesn’t do anything for you or enhance your immune system,” she said. “ There is mercury in the vaccine and that increases your chance for Alzheimers and mercury isn’t good for you in general.”

Welch said there are ulterior motives behind doctors pushing the shot onto patients.

“I know a lot of people who get them and they still end up with the flu. It’s pushed by pharmaceutical companies to get more money,” she said.

Welch, like Patrick, is not anti-vaccine, but she only finds vaccines deemed necessary to get. Otherwise, she feels that leading a healthy lifestyle should cancel out the need for most vaccines.

For Akin, getting the flu shot is a learning experience because it allows for her to bond with people in the medical field, a field she wishes to be a part of someday.

“It’s a really enjoyable experience for me. I’ve had (a shot) since I was little so it doesn’t scare me or anything. Even If I didn’t think I needed one, I would get one to protect people who can’t get them,” Akin said. “People should get them to prevent spread of disease to elderly or to younger children.  The shot is not only for me, but it’s helping other people as well.”

Akin said that before students decide to not get the shot, they should do their research.

“Before you pick a side, do the proper research. Almost all of the misconceptions are false. Except for fear of needles and that’s just your own personal thing,” Akin said. “ Me personally, I think everyone should get one if you can.”