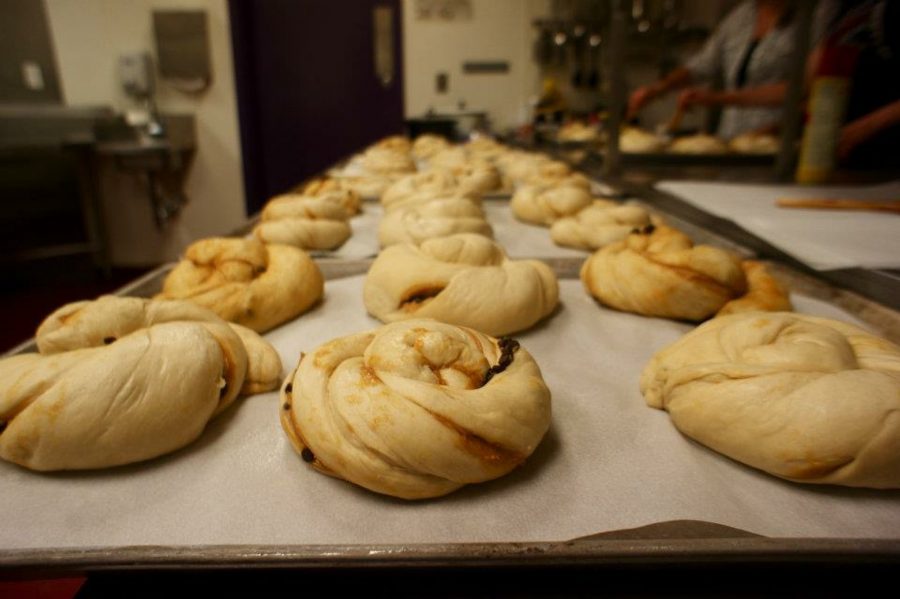 Challah sits on a pan, ready to be baked.

They move gracefully around each other, and the bulky supplies and heavy pans seem to have no effect on their focus for the task at hand as they brush egg wash on thick braids of dough.

This is standard from September to May, when student volunteers bake challah approximately every two weeks to sell as part of Challah for Hunger. The bread has to be ordered ahead of time, and the braids cost $4-5.

Challah for Hunger is a nonprofit, student-run organization. All proceeds are donated to the Eastern Illinois Foodbank and MAZON, a Jewish program that aims to raise awareness for hunger in America.

“If you purchase the bread, you are supporting our charity,” said Annie Goldstein, vice president of Challah for Hunger and senior in LAS. “I feel like if people knew that, they’d be more willing to buy (bread).”

Because Challah for Hunger is a non-profit organization, all the proceeds are equally divided amoung charities while a very small amount is taken to pay for the supplies needed for baking the bread.

Spending the $4 or $5 for bread goes a very long way in terms of fighting hunger, in more ways than one.

“Think about it: You’re not only getting this amazingly delicious challah, you’re helping people who need food,” said Goldstein. “It’s a win-win situation.”

Every two weeks, Lankford and volunteers set up in the kitchen, assembling all ingredients in preparation for however many orders of bread they need to bake.

Lankford is primarily in charge of everything that occurs in the kitchen, including making and baking the dough, making sure the kitchens are clean and meet regulation, ensuring they have supplies each week, working one-on-one with their chapter adviser for the Challah for Hunger national organization, and making sure volunteers are “being respectful with the food.”

Among the many important responsibilities that come with Lankford’s title, making the dough and transforming it into challah is arguably the most important and meticulous aspect.

“We have an industrial mixer in the back of the kitchen that we use, and in it we mix flour, sugar, yeast and salt with some oil and water. Then we let it rise before we braid it. It sits in an oven for about fifteen minutes just so it can suck out some of the moisture,” Lankford said.

One batch of dough makes 16 loaves of bread. Volunteers help braid and add fillings to make different kinds of challah.

The kinds of challah made in the kitchen are either plain, which are sold for $4, or come with fillings — typically either chocolate chip, banana or cinnamon sugar — they are sold for $5. Once the bakers decide on the type of challah to make, they take the covered dough on trays and put them in the fridge overnight to allow more time for them to rise. The first day of baking the challah is now over at last.

When it’s time to take the dough out of the fridge, after about a day, they completely cover the dough in an egg and water wash, and finally put in the oven to bake.

“I really love the braiding. It’s really therapeutic,” Goldstein said, “but I also really enjoy selling it and getting others involved.”

Goldstein said she has a passion for advertising and sales, and through Challah for Hunger she can use these tactics to get people to buy bread, come to braiding and simply to get people more involved.

“Getting the name out there is something I really enjoy, aside from, of course, the aspect of helping people — it always feels great to give back to the community,” Goldstein said.

Unfortunately, Challah for Hunger will not be running for the rest of October due to several important Jewish holidays, such as Rosh Hashanah, that are spread out through the month.

The Illini Hillel will be using the kitchen for the holidays, meaning that the organization will have to wait to use the kitchen, starting up again on Nov. 1.

Emily Kopka, sophomore in Education, helps manage all the social media accounts for Challah for Hunger, including its Twitter account and Facebook page. She also communicates with the board in general about logistics, dates and event planning.

“I loved the idea of (Challah for Hunger) immediately. It was fun to go and bring my friends and make this food, using our resources to be able to help those who don’t have access to those resources,” Kopka said.

While Challah for Hunger is a Jewish organization and operates in a building that serves as a foundation for Jewish life on campus, it certainly doesn’t mean only people who practice Judaism can participate.

Kopka said that if people would just come and see what Challah for Hunger is really about, then “hopefully people will realize that it’s not religious.”

Baking challah is culturally Jewish, but as Challah for Hunger continues to grow, its goal is not to focus on the primarily Jewish affiliation, but to understand its mission in wanting to resolve hunger, starting on campus.