Ski and Snowboard Club prepares to take on Big Sky 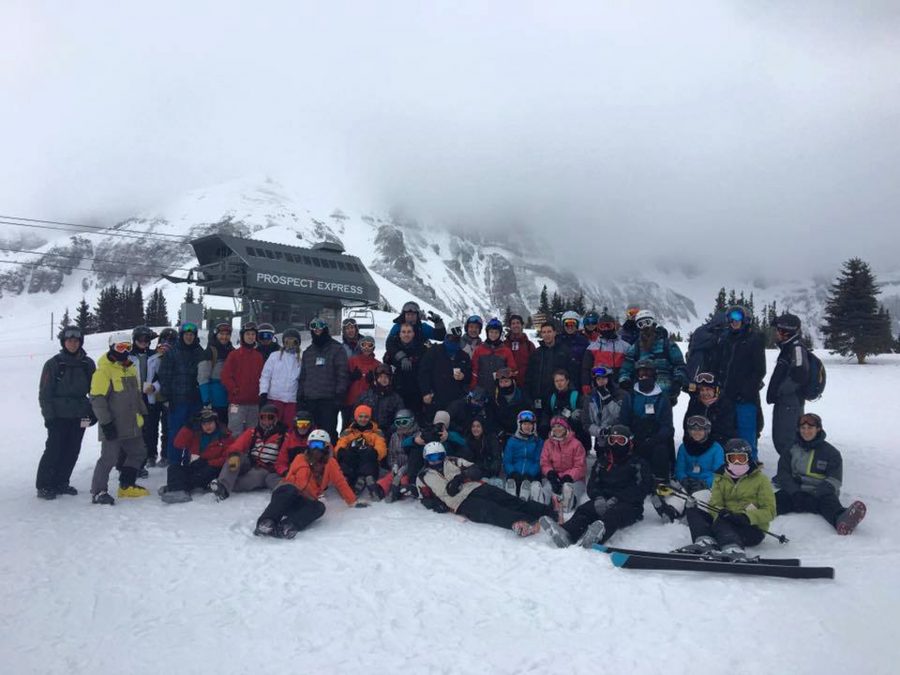 The ski and snowboarding club pictured on their 2016 Telluride trip.

Kristopher Long remembers his first trip to Big Sky Resort, Montana, when he was just a first-year transfer student in January 2013.

The 2016 alumnus in LAS brought along a friend from back home who did not attend the University and recalls having one of the best few days of his college career on the trip.

He, along with the Illinois Ski and Snowboard Club, will be returning to Big Sky Jan. 8-13. Long will be going on the trip with the same friend from 2013.

“We got a random group and we ended up having an awesome cabin,” Long said of the trip. “You get a group of eight to 10 people, and you stay in the cabin together. It ended up being a really good time. We all bonded. Everyone had a good energy.”

Long also said that the 20-hour bus ride provides an opportunity for people to become closer before they get to the club’s destination.

The club takes two trips during the year, one in the winter and one in the spring. Rebecca Rasio, senior in Media and advertising chair of Ski and Snowboard Club, said the club works with Echo Tours, which provides ski passes, transportation and living arrangements for the travelers.

The destination is different every year, and the club travels with people from other universities — this year, the club will travel with University of Minnesota students.

Past trips have included Telluride, Colorado; Steamboat Springs, Colorado; and Breckenridge, Colorado. This year the arranged buses will be leaving for Big Sky on Jan. 7 and will return on Jan. 14, and members can ski from Jan. 9-12. All levels of ski and snowboarding experience are welcome to attend.

Usually 250-300 people go on the seven-day trip. Rasio explained that members, non-members, alumni and people who don’t attend the University are welcome — the fee for this year is $530 for the trip and $195 for transportation.

Past events have included concerts and nights out on the mountain. At Breckenridge, the chalet on the top of the chair lift was opened, and they had a DJ and a bar. The club even participated in the Ullr Fest at Breckenridge that year.

Although club members like Frankie Granata have been on prior trips, that doesn’t take away from their excitement for a new adventure.

“I am very, very excited … My dad always told we need to go out west to see the stars, and I didn’t understand who would want to go out there at first, but then this opportunity came up,” said Frankie Granata, junior in LAS. “I’ll be able to go out west and see the stars and see the mountains, but also have fun during the day and ski with everyone.”

Granata is a little concerned because he hasn’t been skiing in a while, but he expects to rise to the challenge.

Although Rasio has never skied in Montana before, she said she is very excited for one of the largest ski resorts in the area. Rasio said the resort added on to its area, which has a mix of beginner, intermediate and advanced runs.

For Long, the trip is an opportunity to relive his college days back at Big Sky.

“I’m excited to go back to that environment where I still have friends in the group. I want to welcome other people the way I was welcomed,” Long said. “I know it’s gonna be a lot of people’s first trips. I’m just really excited to go out there again. “

Long holds a special place in his heart for the Ski and Snowboard Club because it allowed him to make friends as a transfer student who did not get the typical college experience, such as making friends in the dorms.

“This club was a stepping stone to getting out of my comfort zone on campus. I built that confidence as a new student on campus, and it helped me make relationships. It made more confident with my campus presence,” Long said. “If I had never joined this club I never would have met people that led to other experiences I had in college. The club led to me graduating with a feeling of fulfillment. “

Long wants people to seriously consider going to Big Sky with the club.

“Even if you don’t step on the mountains you can still go out on the resort … The experience of driving down there on the bus and being hyped up is great,” Long said. “You get to network with the group. You develop that camaraderie … You come back to campus like you experienced something awesome together.”