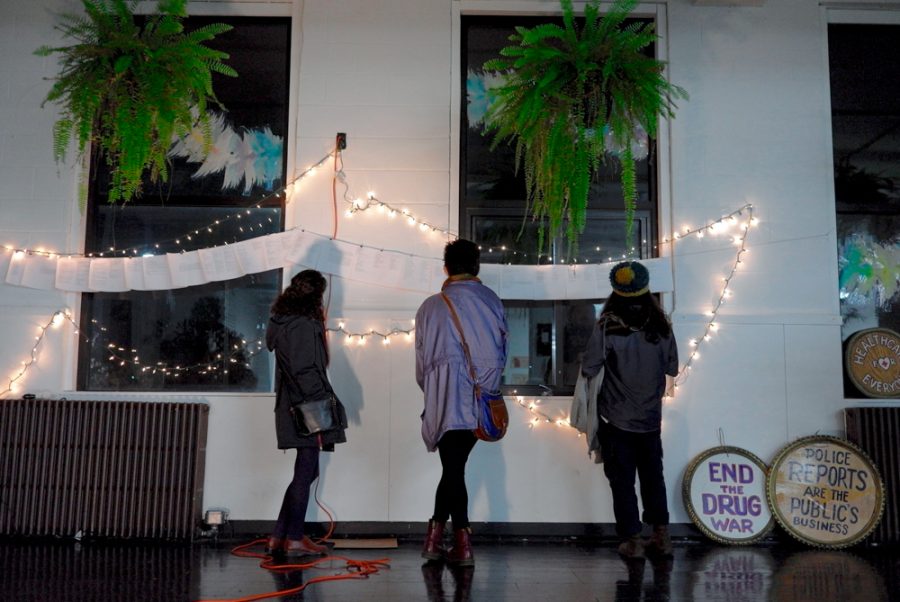 Students read the pieces from the poem wall at the Yikes!!!: A Showcase on Survival at the Independent Media Center in Urbana on Friday, November 11.

Painting and poetry are different mediums that can bring about the same effect: healing.

In a celebration of solidarity and unity, the Independent Media Center in downtown Urbana opened its doors to artists and attendees alike for the “YIKES!!!: A Showcase on Survival” showcase this past Friday night.

The Gharbzadegi Art Collective provides local artists with opportunities to give voice to their art and bring activism to the community. According to its website, some of the shared ideals from the artists within the collective are equality, human rights and the right to practice religion.

The collective also rejects Western military interventionism, neoliberal globalized commercialization and “development,” white supremacy and the patriarchy. These ideals are apparent in the works that are shared, fueled by emotions and attention to political change the artists wish to see in the world surrounding them.

Tyler Camp, senior in LAS and one of the organizers of the event, said the art show was intended to highlight voices that have been silenced.

The themes of survival and resilience were contagious throughout the space specifically geared toward black, queer and other marginalized voices. Although the work was from the angle of marginalized people, a sense of unity could be felt among the collective for any and all who attended.

“I didn’t expect to see so many people, and I’m really proud of how it turned out,” Camp said.

Camp said  exploring their own identities and how their experience shifted once they identified as queer provided inspiration for the artwork they created. By advocating for a space for others to come, view and listen, social dynamics shifted. New perspectives spread to those who may not identify within marginalized groups but want to increase personal understanding.

Upon entering the space, visitors wound through a maze of paintings and drawings with different commentaries and descriptions tagged beneath. In the center of the room there were short documentaries being projected onto the wall and a string of lights displaying poems pinned to the cord. The last corner of the space before the performance area was a booth where individuals could create their own pieces of artwork, inspired or prompted by examples they had viewed within the gallery.

By allowing for multiple mediums to be presented and providing materials for reaction pieces, the invitation for conversation was alive within the gallery.

The concept of survival is something every human being can relate to in a unique way.

Indyia Robinson, sophomore in FAA, said her drawings reflected the emotional aspect of daily experiences she has. These internal elements are ones that cannot be seen unless intentionally presented to allow another person to see what is happening behind the scenes.

“(I was interested) in the theme of survival and the introspective side of it. We use different vices to survive,” Robinson said.

Robinson’s pieces had less of a focus on marginalization from ethnic or sexual identification and more on inner turmoil. Without specifying who the characters were in her pieces, she created a tone of universality that partnered with the varied levels of suffering depicted.

Though the purpose of art is not to be understood directly with the viewer’s experiences, the gallery presented a balance between works spotlighting certain groups and ones where allies and marginalized people alike could relate to the emotion of the moments portrayed.

The performances began later in the evening and included poetry readings, musical performances and rapping. The audience gathered near the front of the stage sitting close by one another on the floor with an air of equality, responding with snaps or calls back to the performers when there were lines that held a particular resonance. A declaration, “we’re still here,” from one performer encapsulated the strength in togetherness and potential for the people gathered, all from different backgrounds, to band together in love to pave the way for change.

Mentions of the results of the presidential election were also common, but the reaction, although one of concern, was not one of weakness or defeat. The optimism in the room was palpable, echoing off the walls as each performer shared their piece.

Anna Rodriguez, a visiting poet from Florida, spoke highly of the ability to create a safe space for the marginalized where white allies could come to learn more about the issues. The art shared within the gallery captured beauty through pain and suffering, but the audience coming together reflected a living piece of art in its attentiveness and celebration of individuality.

“Everyone can try to appreciate and understand these experiences, and that’s valuable,” Rodriguez said.