Life Drawing club: an exposé on exposing yourself 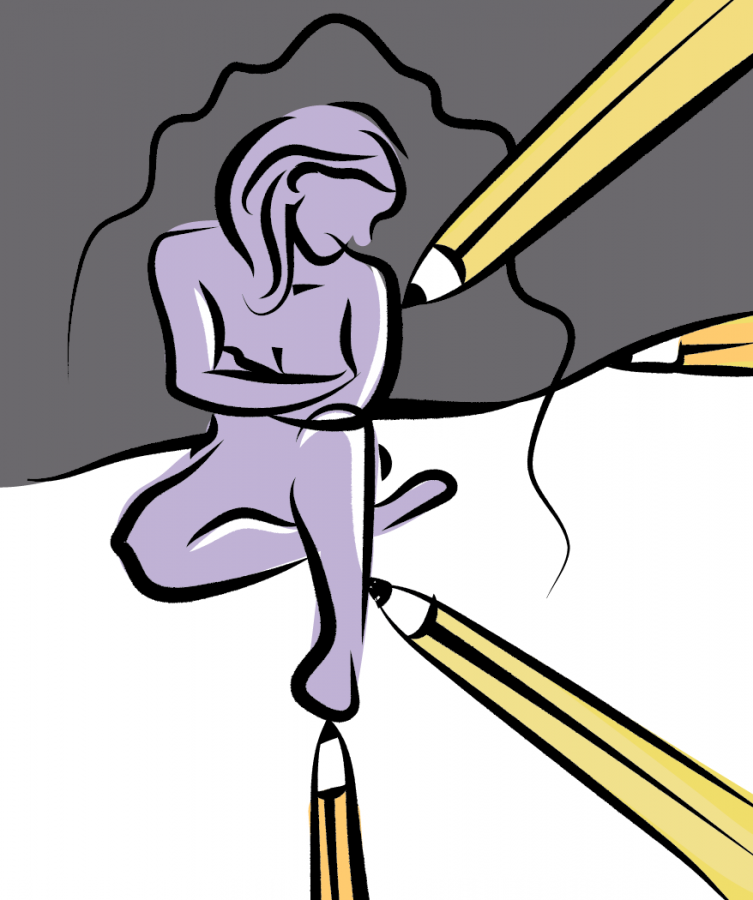 It’s Monday night at 7 p.m. and a group of painters meet in a large studio room, setting up their easels and supplies to sketch a nude model. Life Drawing is a University RSO that helps artists bring the art of the human body to a whole new level of profession.

To Di’Reon Lowry, model for the club and senior in LAS, exposing herself to a group of people seems so incredibly daunting – the thought of putting one’s self in a state of complete vulnerability doesn’t sound like an easy task to say the least.  She said it takes more than just guts to pose in the nude for artists.

“It was the last day of being 21, and I had signed up myself a month in advance, and on the day I was like, ‘I turn 22 tomorrow so I gotta stick to it,’” Lowry said. “I initially wanted to do something I thought would scare me. And it did, so I guess I accomplished that.”

The session lasted two hours with 10-minute breaks in between each hour. Starting with warm-up poses, with varying lengths from one minute, to 15 seconds, to 30 seconds, allowed Lowry to give as many different perspectives of her body as she could.

“I walk in and there are like six different tables and 12 people sitting around the platform in the middle, with a really aggressive light coming from a couple different angles overhead. The warm-up poses in the beginning were probably the most nerve-wracking,” Lowry said.

After that, they moved into 10-minute poses, only doing a few of these for the artists to sketch. The hardest part for her, Lowry recalled, was when they brought in the chair afterwards. The poses were more revealing, and Lowry was uncomfortable at first, but the Life Drawing club made a point of catering to her feelings.

“I think my favorite part with working with the model is that you always get to do the pose yourself first, so you look like the crazy person in the room. It’s also kind of active with the model because while they’re up there and posing, you need to make sure they’re not hurting–you have to gage whether they’re still feeling comfortable with the pose or not,” said Griffin Tucker, junior in Engineering and president of Life Drawing.

The session ended with a 30-minute pose, and then a 45-minute pose where Lowry was asked to lay down. She explained that while she was laying down, she had no recollection of the time or how long she had been laying for and ended up falling asleep for a little while.

After spending that much time posing and working and focusing on something other than the fact that she was naked, Lowry was almost desensitized to this idea of being ashamed.

Lowry said there’s an incredible seriousness and professionalism that goes hand in hand with the artist and the nude model. This is something that the Life Drawing club has worked hard to perfect by providing a safe environment for achieving the best form of art possible.

When creating art, there is no room for judgment or criticism. The point of art is the freedom of expression, and when there are people who take away from this kind of creative environment, it automatically takes away from the art.

“They were very serious about their art  and I had to realize that I was contributing to the art. So, to look down and see – even though I wasn’t supposed to be moving – really good drawings of myself, I thought it was pretty empowering actually,” Lowry said.

Even though the art of modeling nude is seen by both Lowry and Tucker as very natural, it didn’t happen overnight. The Life Drawing club strives to nullify the idea that nudity is weird, uncomfortable and unnatural.

“This club is a space where you need to throw away those old pre-established thoughts of the human body as something to be ashamed of. A lot of people, when I talk about this club, they hear the words ‘naked people’ and the automatically go ‘ew’ – but it’s not that and shouldn’t be something weird or shameful. I feel like in Life Drawing club, it’s a space where we can throw away that mind set and appreciate the human body and be able to study it,” Tucker said.

Throughout history, nude modeling has been seen as an appropriate and most effective way to study and learn about the human body, and depict it in the most natural and true form.

“I think it’s one of those things where being in the nude is very pure. It’s probably one of the purest art forms you can find because there is so much vulnerability with it. I think it’s a really great way for artists too, to kind of explore. It’s the human body, it’s who we are as people,” said Kenzie Sinta, freshman in FAA.

Sinta said American culture is very censored. In other countries like Italy or France, it’s not uncommon to see naked statues and nude paintings. She said life comes with a lot of insecurities and part of Life Drawing is helping people to overcome those insecurities regarding nudity. Living in America, it can be especially hard at times to turn off those negative thoughts when the media portrays it’s unrealistic expectation of how people should appear in society.

“Our society has conditioned us to think our bodies aren’t good enough and not to be depicted or glorified in this way. It doesn’t matter the size or shape of the person; art is art is art,” Sinta said.

The Life Drawing club members have developed the ability to become utterly objective when it comes to drawing someone else’s body. The exchange between two artists, the painter and model, is an incredibly delicate relationship that must establish a trade-off between the two.

“Someone is looking at your body and trying to draw you not only in the way that you look, but also the feeling that you are projecting. It’s trying to be in-between those two things. I feel like without something like this, there’s no vulnerability. And with art in which you want to show people, you can be kind of shy when you’re showing someone something you put time into – so I feel like that kind of vulnerability is traded between the people drawing and the person standing there naked,” Lowry said.

Most people are self-conscious about the little things they hide from others. To expose every single one of those in a profound way requires a shifted mindset about bodies and humans.

“We’re all just naked bodies walking around, we just chose to put things on top of them. It’s not weird to be naked,” Tucker said.