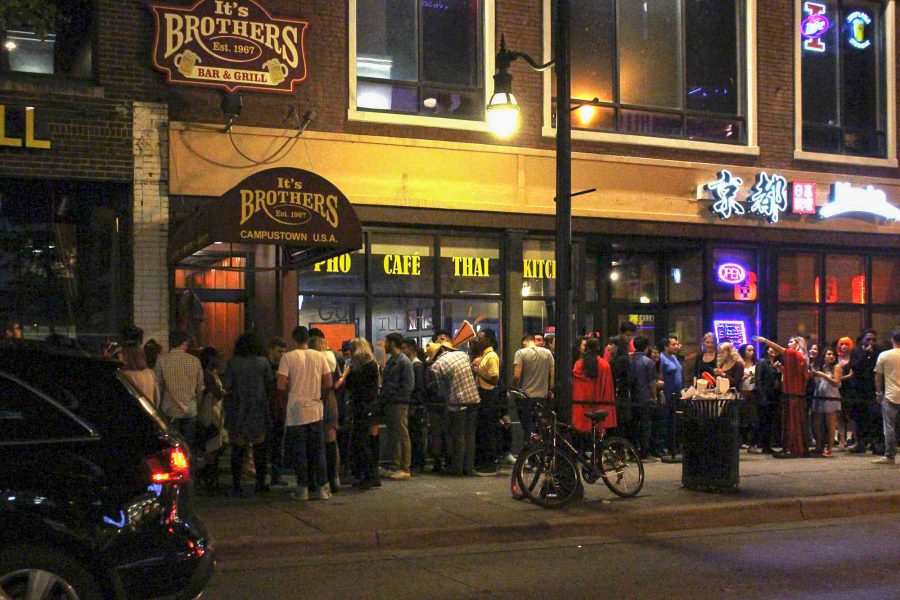 For Amelia O’Hare, junior in FAA, a night out at the bar with friends is not always easy or accessible. As a student in a wheelchair, bar life can be segregating for O’Hare.

Currently, the University is ranked among the top six public universities in the U.S. for the most wheelchair-accessible campus. Bars on campus do not meet this same standard.

Brothers, the popular bar on Green Street, only has one main entrance — a large staircase leading up to the venue.

“Brothers is not accessible. I have never been in there, which honestly really does separate the way we can socialize with everyone else on campus,” O’Hare said. “That is a big part of the culture on campus and college in general.”

O’Hare said she usually prefers to go out to places like Murphy’s or Legends because both of those bars are one floor, making them among the most accessible handicapped bars on campus. Additionally, the bars have more room than the others.

“If I go out with a big group of friends that live around me, there is a matter of being able to move around comfortably because we are all clumped together awkwardly,” she said.

O’Hare explained how some single-level bars lack space for her to move around. She said that during her time at the University, she has never been to KAM’S because the bar is usually crowded and difficult to move around in.

For many students, bar crawls are a regular social event. Traditionally, many campus clubs and Greek organizations plan at least one bar crawl a year.

However, O’Hare has experienced bar crawls that were impossible for her to attend because some of the bars listed were not wheelchair accessible.

O’Hare said it can be very frustrating to miss out on these types of social events and bonding experiences due to the lack of wheelchair accessibility in campus bars.

Bathrooms are another issue O’Hare faces when out at a bar. She said Firehaus has an accessible first level, but the women’s bathroom is on the second level with no way of getting up to it other than the staircase.

“If I am out and need to go to the bathroom, I have to go somewhere else because I cannot go to the one there,” she said.

Hannah Boncosky, manager at Firehaus, said the bar and restaurant could take steps to become more wheelchair accessible. It is something she said the “upper management would have to figure out.”

“As far as restaurant seating, yes, we do have a downstairs level that has eight tables that are wheelchair accessible,” Boncosky said.

The restrooms are only wheelchair-accessible for men.

“We do have a men’s bathroom downstairs, but our women’s (bathroom) is maybe three or four stairs up,” Boncosky said. “So, that is a little bit of an issue. But, other than that, as far as people coming to eat and drink, it is accessible.”

“The first floor is the largest part — the second floor only accounts for a third of the space,” he said.

Henry also said the bathrooms in the back are newer, so they have handrails. He also said he has seen many people in wheelchairs at bars over the years.

O’Hare is using her independent study in Urban Planning to focus on accessibility, “for average people who want to go get jobs or an education and live like everyone else.”

“I also want to work on campus to make it a little more accessible and inclusive,” O’Hare said. “It’s isolating sometimes.”