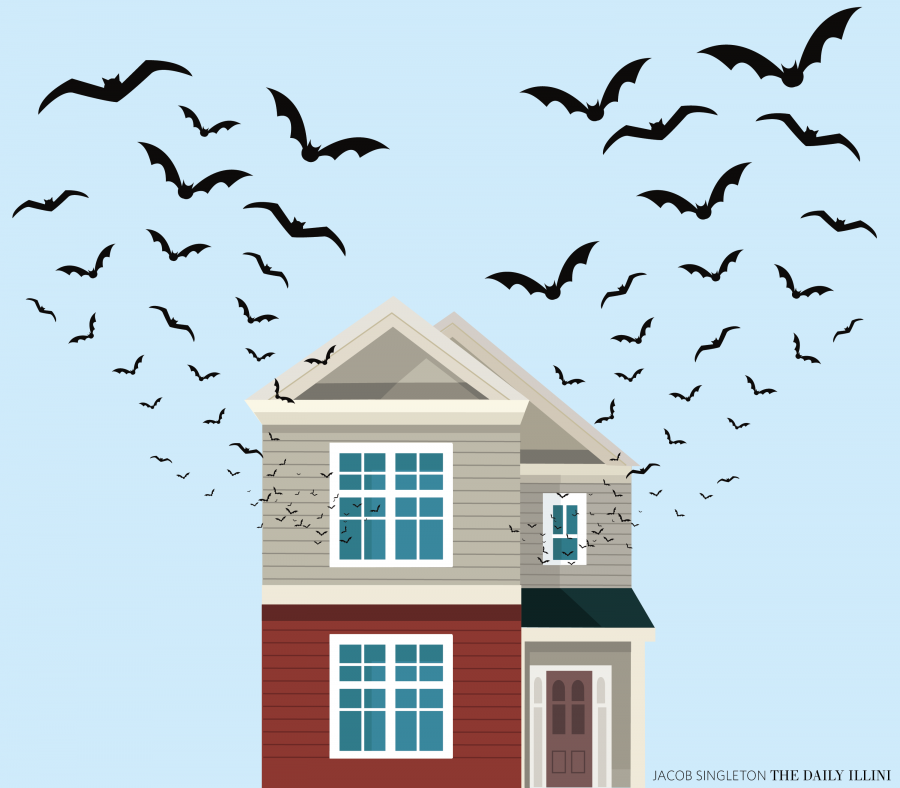 Coasting just below the sunset with silent wings, this guardian of Urbana might be confused for a bird. Bats in nature are nocturnal and balance the ecosystem by eating fruit and insects. Bats in a home, however, can be a startling and unwelcome surprise.

During the winter months, some residents of the C-U community may experience issues with bats taking shelter in their attics.

Robin Kearton, member of the Western Urbana Neighborhood Association, wrote in an email about her encounter with a bat in her home.

“I came home from the grocery store just in time to see my roommate rather frantically running out the front door.  He had been dozing on the couch and woke with a start at the sound of the bat flapping around,” Kearton wrote.

The invitation for the winged mammal to stay was not extended: Kearton and her roommate left the door open, and a house cat chased the bat until it finally flew out the door.

Bats are known to hibernate in attics, often above unaware tenants or homeowners, but exposure to these animals while in flight is dangerous because there is a chance for rabies to spread.

According to the Centers for Disease Control and Prevention, most people probably know when they have been bitten by a bat, but the small teeth of the animals can leave bite marks that fade quickly. The site encourages those who have been bitten to wash the affected area and seek medical attention immediately.

Rabies is extremely fast acting and fatal if untreated; however, the disease is also very rare.

Catching the bat and sending it to a laboratory for testing is the only way to be positive if it carries rabies, but it is advised that professionals take care of removing the animal.

Steve Beckman, expert in animal control and head of the company Anything Wild, has worked in the C-U area for the last 21 years.

“It has been several years since a bat with rabies was in Champaign, that I know of,” Beckman said.

Though the occurrence of rabies is not highly common, Beckman still recommends not attempting to intervene with a bat without any experience handling wild animals.

“Don’t try to handle it yourself, call somebody. It’s not worth getting bitten or scratched,” Beckman said.

Beckman said female bats migrate south for the winters, but males tend to stay in the area. All it takes is a quarter-inch sized crevice for a bat to get into a house. A bat typically enters underneath or above the door and through cracks in a house’s exterior.

When the weather drops to below 30 degrees, a bat’s bones will not work properly. The inability to fly is what leads many of them indoors as they are seeking warmth.

When encountering a bat in flight, Beckman suggested standing with one’s back to the wall and watching it fly while making a little noise. Bats use echolocation to figure out where they are and what is in the room with them.

Tom Schmidt, member of WUNA, said when he lived in a house on Elm Street back in the ’90s, he and some friends watched a bat fly into their home through the front door while they were standing on the porch. Moving quickly to shut the door in the room, Schmidt noticed just as the bat entered that a commercial for Batman happened to be playing on the TV at the same time.

“Bats have an intriguing quality to me,” Schmidt said. “They are cool only in a sort of creepy way. They’re misrepresented.”

Beckman said that bats typically do not have malicious intentions when they show up inside peoples’ homes; however, if an animal did have rabies, it would act irrational.

“They’re not a bad animal, it just isn’t good to have in the house. They aren’t gonna go away on their own,” Beckman said.