Before even stepping foot on campus, freshmen are warned about the dangers of the dreaded “freshman fifteen.”

A widespread concern across the nation is that university freshmen gain 15 pounds by the end of their first year of college. However, a 2015 study conducted by the Nuffield Department of Population Health at the University of Oxford revealed that this is no longer the case.

The study was conducted on six electronic databases using data from 1980 to 2014. The study concluded that the overall average weight gain of the 5,549 students surveyed was 3 pounds over approximately five months. 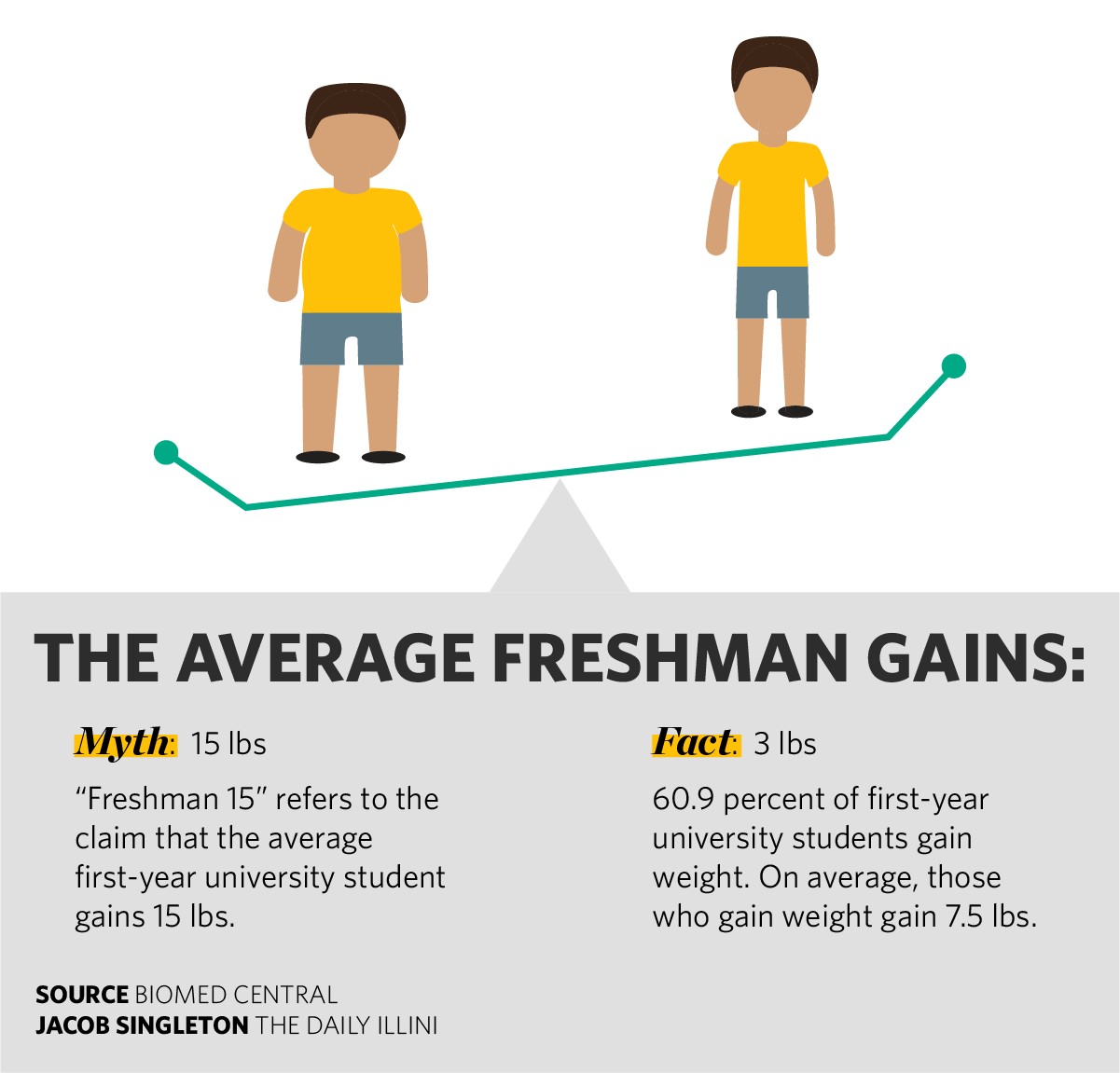 Even though this is about half of the expected amount, freshman weight gain is still an issue.

At the University, first-year and transfer students are required to live in residence halls. While students have the option of choosing between private certified or university housing, a meal plan is part of the requirement.

Restaurants on Green Street and off-campus are an option as well, but they come with an out-of-pocket cost.

Leila El Erian, freshman in FAA, works and eats in the Ikenberry Commons.

El Erian said many of her freshman friends create their own meals in the IKE because pre-made meals are often unhealthy.

“I don’t know anyone that eats healthy and eats in the IKE,” said El Erian. “Look at the 57 menu, there is nothing healthy on that. There’s chicken tenders, there’s buffalo wings and stuff, but I don’t see anything healthy on there.”

It does also serve the healthier option of a spinach wrap, but El Erian said although she thinks the spinach wrap is a better option, it becomes unhealthy when students add ingredients such as sour cream to it.

Katlyn Carrington, freshman in DGS and Snyder resident, said it seems like there is only fried food available in the IKE.

El Erian said she stopped eating in the IKE and switched her meal plan to credits only because she didn’t like the foods served daily such as pork and macaroni and cheese.

In Illini Tower, Dining Services Manager Holly LaPrade said the staff tries to balance everything out. She said they often get requests for healthier food, so the staff will prepare more options that are grilled, baked or sautéed instead of fried or battered.

However, just because healthier options are offered, it doesn’t mean that students eat them.

“In a healthier meal, everybody goes and gets cheeseburgers and Philly cheesesteaks (at the grill section). If we have chicken strips or chicken wings, they’re gone in a second,” said LaPrade. “They tell themselves they want healthier, and they do probably want healthier, but it’s not what they’re actually eating.”

There are fried foods available at every meal, but it’s up to the diner to make the better choice.

“I’ll be honest, when I started working here I gained quite a bit of weight pretty quick because it was all right there whenever I wanted,” LaPrade said.

Since then, LaPrade said she learned to make healthier choices and select combinations of food that are better.

Students who dine in Illini Tower tend to eat the pre-made options over putting together their own meal.

LaPrade and her team try to be proactive in helping the students create meals, but the problem is that students don’t pay attention to signage.

LaPrade said there are healthier options available to freshman, but it is up to them to select those choices.

“I think that a lot of it is just other things on their mind, and something that’s ready prepared right in front of them is going to be easier than if they have to do little work to put the (meals) together,” LaPrade said.