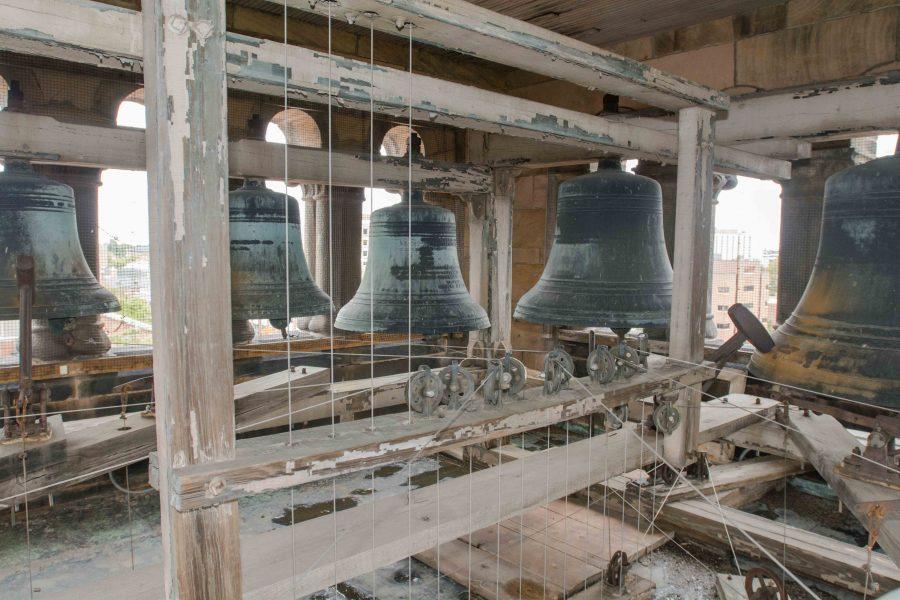 A view of the chime in the Altgeld Hall bell tower. The chime will play "Archaea" simultaneously with the McFarland Carillon as part of the Sesquicentennial.

Since the University Chime was installed in Altgeld Tower back in 1920, students, faculty and community members have had the opportunity to hear the booming, melodic bells at least once a day.

Sometimes the tunes are more whimsical, bringing smiles to peoples’ faces with the familiar “Looney Tunes” or “Harry Potter” themes, but they can be traditional as well, such as when “Hail to the Orange” is played.

The music from the bell towers has become an integral part of campus culture for many, including Professor of Music, Stephen Taylor. To Taylor, it only seemed right to integrate the tradition into the University’s Sesquicentennial Celebration.

Taylor, who has been working with the University since 2001, composed a piece titled “Archaea” to be played on both the Altgeld Tower and McFarland Carillon bell as a part of the kickoff festivities for the Sesquicentennial Celebration at noon on Feb. 28.

The song is dedicated to the celebrated biologist Carl Woese, who, while at the University, discovered the genetic domain of Archaea through the sequencing of the organism M. Jannaschii.

“When the University asked me to think about a piece for the University’s 150th anniversary, I knew I wanted to do something to celebrate both the arts and sciences; most of my music is about both, in one way or another,” Taylor said.

In order to prepare for the composition of this piece, Taylor consulted with some of Woese’s colleagues who still teach at the University, particularly Gary Olsen and Claudia Reich, who were co-authors on the famous discovery. Taylor also attended MCB 150, an introductory biology course, taught by Professor Brad Mehrtens.

In his composition “Archaea,” Taylor said he used the information he gained about genetics to create the piece. The genetic sequence of M. Jannaschii was used as the foundation for his song. In the organism, the genes are arranged in a circular chromosome, and in this circle, there are different colors that represent which genes are involved with each cellular process. To compose his song, Taylor assigned each color a “musical motive.”

“One of the problems of turning genetic data into music is scale,” Taylor said. “If you turn each DNA letter into a note, the piece will take a long time unless you choose something small, like a single gene. But I wanted to do the whole genome of M. Jannaschii. I gradually realized I could represent these functions musically, by using a simple musical idea – two, three or four notes, with different intervals for each color.”

The song will simultaneously be played electronically at the McFarland Carillon and manually by a chimes player at the Altgeld Bell tower. Rebecca Wipfler, sophomore in LAS, is one of the potential musicians who will be playing it.

In the first semester of her freshman year, Wipfler learned about the RSO Altgeld Ringers, and became interested in learning to play after taking a tour of the bell towers. Wipfler said she is excited for the two bell towers to be joining for one concert, especially one as big as the sesquicentennial.

Wipfler said the biggest challenge of learning to play is getting accustomed to the layout and weights of the chimes. It often requires a lot of practice and dedication for chimes players to perfect a song. Wipfler said “Archaea” is not too difficult to play, as the chimes player part is more chords than rhythms, but is still something she is not used to playing.

“‘Archaea’ is very unusual but interesting as it has a free meter,” Wipfler said. “That is, there is no set beat or time procession for it. We were instructed to play it freely over the course of time that the South Bell Tower will be playing what I assume will be the main theme.”

The song is relatively long, taking about 16 minutes for the entire piece to be played. Because it will be played on both towers on campus, “Archaea” will be difficult to miss.

Taylor said if someone were to stand around Foellinger Auditorium, they could hear both towers play the song at the same time.

Eva Bucke, freshman in Engineering, said she enjoys the music of the bell towers. As a member of the Marching Illini, she said they are especially fun, as hearing them makes her think of being on the field during games.

“I like them because they bring an old-timey feel to campus,” Bucke said. “I think the bells play a role in our school’s culture because everyone hears them. Everyone knows where the sound is coming from and they play songs that are relevant to our lives today.”