Funkadesi embraces many cultures during Sesquicentennial 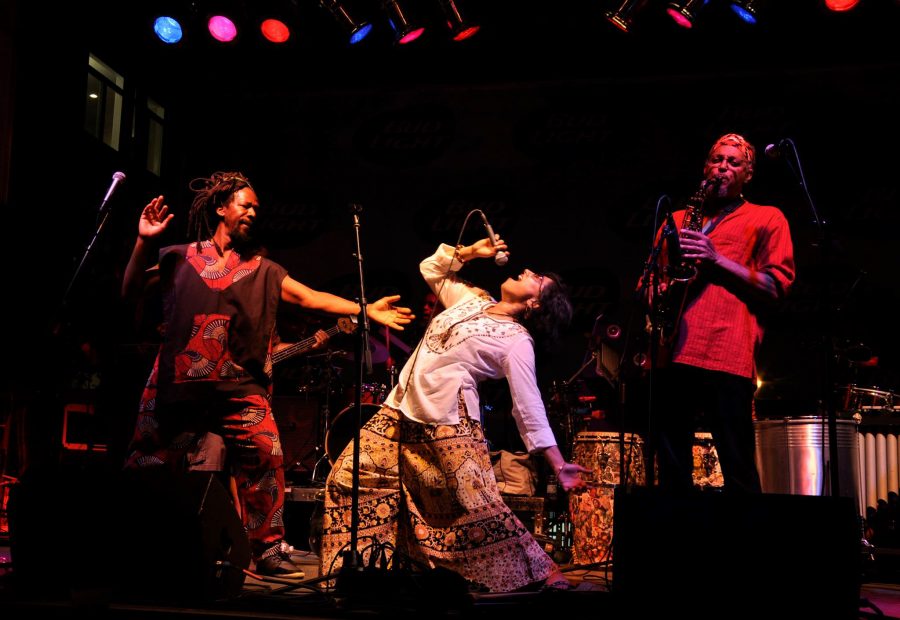 Three members of Funkadesi perform at a past Krannert event. Funkadesi will perform at 5 p.m. at Foellinger Great Hall on Tuesday as part of the University’s Sesquicentennial celebration. The event is free but the University is asking guests to RSVP online ahead of time. The group offers a diverse sound, merging Indian music such as bhangra, Bollywood and Indian folk with a reggae, funk and Afro-Caribbean groove.

Imagine a tap dance performance in front of the National Center for Supercomputing Applications or crop science students spreading soil across the stage in Gregory Hall’s theater.

Instead of staying spread out on their respective corners of talent, studies blend together on one another’s territories, reversing expectations and unraveling the accepted norm.

Funkadesi, the music group performing on Tuesday to jumpstart the Sesquicentennial celebration, is bringing its fusion of cultures and sounds to Krannert Center for the Performing Arts. The group plans to capture the beauty of overlap and togetherness as the University celebrates its 150th birthday.

Pradeep Khanna, chairman of the Sesquicentennial Planning Committee, said preparation for the series of events to commemorate the arrival of 150 years was a collaborative process for the committee over the last three years.

The preparation entailed arranging musical pieces to be composed and taking the steps needed for a book to be published, putting significant events of the last 150 years in research from professors and students to paper. Khanna mentioned the importance of this day and what it means to the University as an institution.

“For the last 150 years, the University has played a major role in innovations that have transformed our society,” Khanna said. “It’s good to look back on what we have done and to see where we are going in the future, to renew our commitment to the higher education and innovation that this University is known for.”

The choice for Funkadesi to be the soundtrack to introduce the next 15 months of observance was made by the staff at Krannert.

Bridget Lee-Calfas, advertising and publicity director at Krannert, said in addition to being a five-time Chicago Music Award-winning group, their connection to the University with being based in Chicago and the diversity represented by Funkadesi factored into the decision to ask them to perform.

On two other occasions the University has hosted Funkadesi, and Lee-Calfas spoke to their joyful, vibrant and adaptable talent.

“(We have) seen their ability to build community and connect with the audience,” Lee-Calfas said. “They demonstrate wonderful kindness and bring a warmth to the stage.”

According to their website, Funkadesi merges Indian music such as bhangra, Bollywood and Indian folk with a reggae, funk and Afro-Caribbean groove. While one may not recognize each distinct aspect of the musical equation, it is easy to tell there is an agreement to share the sound waves among the various styles.

Sharma was born and raised in Kalamazoo, Michigan, but had parents from Nairobi, Kenya, and grandparents from Northern India. His visits to Kenya every three or so years growing up helped inspire him to form Funkadesi, a combination of music hailing from all over the world.

“(The visits) helped me gain a curiosity of how we all relate to each other across cultural lines,” Sharma said.

After graduating from college, Sharma traveled throughout India before finding himself in the Chicago music scene. Sharma began to play the West African music ‘djembe’ and explore further what music meant to him as well as people who were unlike him. Sharma referred to Funkadesi as a “life experiment.”

“We welcomed people that were open to bringing their own cultural artistic signature to the mix,” Sharma said.

The group consists of 10 musicians, sometimes featuring an 11th West African drummer during performances. With roots in Brazilian, Latin American and African influences, there are distinctive rhythms that are not necessarily meant to be combined. Sharma spoke to the group’s ability to interlock the rhythms so it is not just one sound competing to be the loudest or most prominent, but all are able to thrive in the space together.

The fusion and deepening of connectivity goes further than just the music being created, and Sharma said the group is together for more than the sake of a performance.

“I think people feel this healing vibe from us, feel we are a family,” Sharma said.

Audiences at first glance seeing turbans and dreadlocks together may wonder why the members of the group are in the same spot, but Sharma confirmed bringing together these pieces of culture is a way to embrace diversity by moving past just using it as a buzz word.

Khanna mentioned the University has changed in diversity from a social, ethnic and economic background both within this country and internationally over the last 150 years. By democratizing education and making it available to the masses, Khanna said the University has been responsive to society.

“My expectation is that the University will continue this momentum and to be on the edge of addressing societal needs,” Khanna said.

Along with belonging to Funkadesi, Sharma is an assistant professor and diversity concentration coordinator at the Illinois School of Professional Psychology at Argosy University in Chicago. Sharma referred to the “CHI recipe” when addressing social conflict and diversity on a day to day basis. Distilling it to its basic ingredients, Sharma suggested we act with “compassion, humility and insistence,” if we want to be a part of a positive change.

“Try to speak from your own truth,” Sharma said, “Go to a rally, show up to a board meeting if something isn’t being addressed.”

The liveliness of Funkadesi and variety it presents to its audiences are exemplary of what they believe society can be like on and off the stage.

Sharma refuses to be, “just a pretty, diverse face,” and instead embraces the idea that differences in culture, identity and sound may one day universally bring about love and respect, rather than their opposites.

“It feels like a privilege.” Sharma said. “I feel more of a calling now than I did 20 years ago because of where we are as a country.”