Students reflect on 21 years of Unofficial 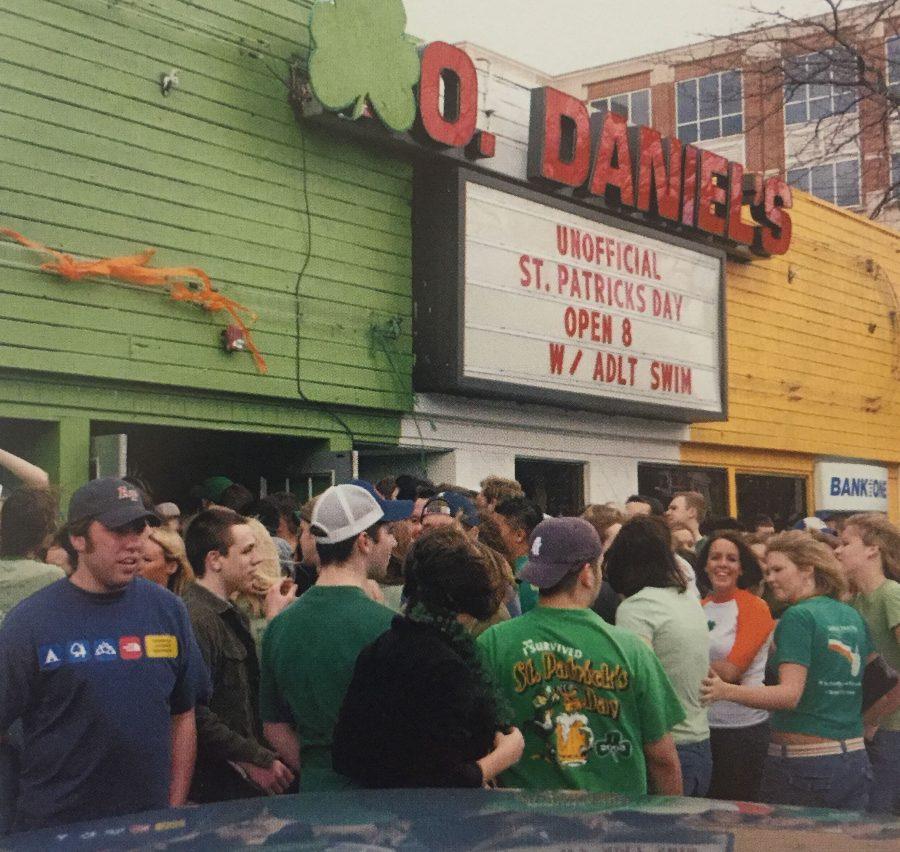 Students wait outside Co. Daniels, a popular bar at the time, on Unofficial, March 5th, 2004.

In 1998, Andrew Barnum and Erik Pederson were in a dilemma. The University seniors had a paper due the next morning — the morning of Unofficial St. Patrick’s day.

They pulled an all-nighter writing the essay, and then walked to the classroom that morning and slid it under the professor’s door. Afterward, they immediately headed to C.O. Daniel’s, their favorite bar at the time.

“They weren’t even really open, we were that early. We actually helped set up a bit,” Barnum said.

Unofficial St. Patrick’s Day will take place this Friday. While it has become a popular event among University students, it has gone through a series of changes since its roots in 1995.

The unofficial holiday first started as a bar promotion in 1995 called “Shamrock Stagger.” St. Patrick’s Day, a major business day for bars, fell during spring break that year. Local bars wanted to organize an event that would allow students to celebrate the holiday a few days before spring break. In 1996, it became known as Unofficial St. Patrick’s Day.

Barnum and Pederson, who were students when the event first started, remember the bars being popular on the day of Unofficial, but the event wasn’t as distinguished as it is today.

“It was more of a casual gathering,” Pederson said. “I didn’t really understand that it was going to be a big deal.”

At the time, it did not seem like police patrolled the event more than any other weekend, Barnum and Pederson said. They felt like it was a rather lenient day on campus.

Eventually, the holiday became a popular tradition at the University and an excuse to binge drink for an entire day. Kids from other schools started coming for the event, some students began vandalizing University property and some even attended class while intoxicated.

In 2006, Caroline Yoon, an alumna of the University, passed away when she was hit by a drunk motorcyclist.

“People look at this as a one-time event every year,” said Sgt. Joe Ketchem, who has been working with the Champaign police department for almost 20 years. “And for some reason, at one point several years ago, kids had this in their mind that (Unofficial) was a great, big, national party school thing.”

University alumna Kelley Krumtinger graduated in the class of 2010, and recalls Unofficial being a prominent outing for students. Students generally wouldn’t go out the Thursday before in preparation for the event. Irish music played early in the morning, and people started the festivities at 6 a.m.

She even recalled seeing a girl get into a bar by using her pool pass.

“You’d walk in the Quad, where people are supposed to be going to class, and it’d just be like mayhem,” Krumtinger said.

In 2010, bars were forced to change the admittance age from 19 to 21 for the event due to the excessive amount of underage drinking.

Unofficial appears to have taken a calmer turn in recent years, probably because the police take extra caution when it comes to the event.

Overcrowded bars and balconies are often a signal for them to check for underage drinkers. For frat parties, police look for loud music and crowds of people standing outside.

Resident halls have even started cracking down when it comes to Unofficial.

Frequent room checks are made, and students are not allowed to have overnight guests during that weekend.

Oftentimes, students who are under 21 don’t even want to risk the chance of going out because they cannot get into the bars, and house parties are frequently raided by the police.

Edgar Garcia, sophomore in Engineering, did not participate in Unofficial last year due to the large risk of going out during the event.

“Since the cops have cracked down much more compared to the past, Unofficial has been pretty laid back for many people now,” Garcia said. “Everyone wants to come down for it because it gets hyped up, but they don’t realize that unless you’re 21, you’re pretty limited to what you can do.”

With the ultimate goal being students’ safety, Ketchem hopes the event continues to wind down in the future.

“I think kids have gotten a lot smarter and realized that it’s not worth the hassle,” Ketchem said.