Community rallies for a cure 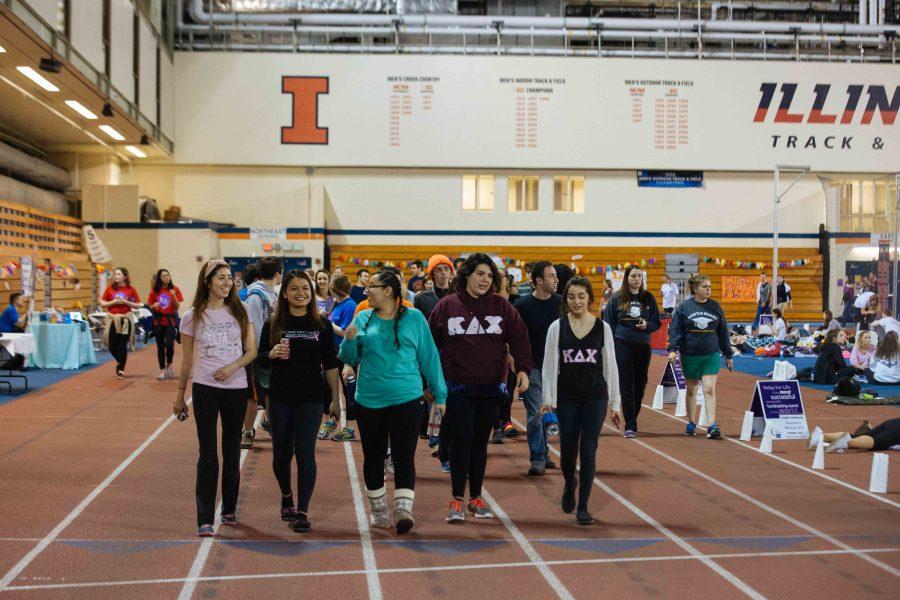 Students at the University attend the annual Relay for Life to fight against cancer at the Armory.

Jane Akin sat in the middle of the Armory on Saturday night gazing proudly at her daughter, Grace, the vice president of Colleges Against Cancer, the RSO responsible for putting on Relay for Life 2017.

Akin is a cancer survivor and said her daughter worked hard to make Relay for Life a success to honor her struggles.

An indoor fundraising event  for the American Cancer Society, the 16th annual Relay for Life took place on Saturday at the Armory from 6 p.m. to 2 a.m. Money raised for Relay for Life benefits research, patient programs and outreach services.

“I think that when you know someone that’s had cancer, it has a whole different meaning because there is an emotional attachment to it,” Akin said. “You can do (Relay for Life) for service hours and you can do it for fundraising or just to hang out with friends, but when you have a friend or loved one that has had cancer, it changes everything.”

As a survivor, Akins said it was especially important to know that there is a whole community of people supporting and fighting for her. She said that is what makes Relay for Life so special.

Relay for Life was established in 1985 by Gordy Klatt of Tacoma, Washington. Klatt ran around a track for 24 hours and collected donations to support cancer patients.

Today, there are over 500 colleges that have a Relay for Life event. Each year about $400 million dollars are raised.

This year, the event is bigger than ever and Colleges Against Cancer wanted to celebrate 2017 as a coming of age for Relay for Life.

This year’s event included performances from No Strings Attached and Rip Chords, both campus a capella groups. The on-site fundraisers also included henna tattooing, face painting and the University held a sweet sixteen birthday party for this year’s event.

Mathur has been involved with cancer awareness programs since high school and has experience with Colleges Against Cancer on the local and national level. She said she believes the most rewarding part of events like Relay for Life was empowering individuals and communities.

“It is a night that the community can come together to celebrate, remember and fight back,” Mathur said. “So we celebrate all of the important milestones that we’ve made in cancer and remember those that we have lost or are still fighting their battle with cancer, and then we fight back and figure out ways that we can come together to make sure that nobody has to hear those words again.”

Anna Fabbri, sophomore in ACES, is in the Alpha Gamma Delta sorority with Akin’s daughter. AGD’s team walked for one of their members who was recently diagnosed with cancer.

“I think it is a great way to not only bring together the community, but also raise money to help people who have been affected by cancer, whether that means getting them a wig or helping them feel better, give them a sense of community,” Fabbri said.

The motto behind Relay for Life is “celebrate, remember and fight back.” The highlights of the evening were the Survivor Walk at the opening ceremony and the Luminaria, which was held at 11 p.m.

The Luminaria is the portion of the night where the lights are dimmed, and everyone lights paper bags filled with glow sticks. This ceremony is meant to be a moment of silence for all cancer patients.

Mathur said the Luminaria is one of the most moving parts of Relay for Life and is part of the reason people return to the event year after year.

“The lights will be shut off and there will be sort of like a candlelight vigil for everybody that we may have lost or that are still battling cancer and it’s really a moment for everybody to come together and heal as a community,” Mathur said.

Fabbri said she was excited to be a part of a team that shows support for something bigger than herself.

“I’m very proud of U of I that we can come together and do something so great and raise so much money for a great cause,” Fabbri said.