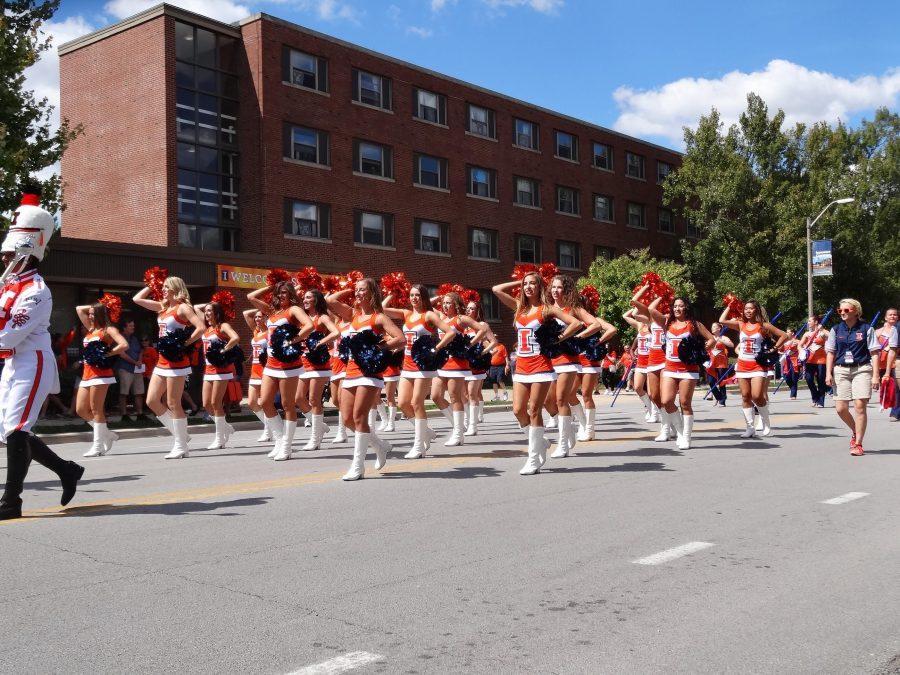 The Illinettes march in a parade on campus. The Illinettes practice almost every day and most audition for spots before performances.

Nearly every day of the week in the fall and spring season, 28 girls work hard to perfect their routines and feature numbers for football and basketball games.

These girls make up the Illinettes Dance Team, which is merged with the Marching Illini, who serve as a source of strength and positivity during performances at games, parades and more.

With almost every ounce of free time spent toward their practices and games, the dancers have to be conscious of finding ways to include time for both academics and a social life.

“The hardest part about being on the team is just maintaining balance in your life,” Mahacek said. “I’m in a sorority, too, so a lot of times it just feels like ‘Ah, I’m spending so much time at practice I never have time for anything else.’ I’ll get home and be too tired to want to go out, so I’ll just end up finishing my homework. It’s really hard to fit in a social life sometimes.”

While the Illinettes aren’t officially considered student athletes, the same rules do apply for them.

“Maintaining good grades is really important for us, so time-management plays a huge role in our daily lives — even during winter break, as well as when we still have games,” Mahacek said.

Even when the going gets tough, whether that means a team is losing or it’s been a difficult week for a dancer personally, the girls on the team try to remain immensely positive and optimistic when performing.

“For the majority of us, when the camera comes by, we’ll all start smiling and cheering and make sure that we still have that school spirit, even if we’re not doing too well. It reminds us of how cool the actual event is,” said Amy Stubenfoll, Illinette and senior majoring in architecture.

The football games are televised, so when mishaps occur, the team has to think on their feet and be prepared for anything that may happen.

“A lot of times, we have to throw things together and do things on the spot, and sometimes we’ll have last-minute additions we’re not super prepared for. But we still have to perform it and do a good job, too,” Stubenfoll said.

For basketball games, the Illinettes prepare a feature for the game, which is a choreographed routine to their song choice, but aside from this set dance, every other time out during the game is entirely improvised or planned out about an hour before the game.

“We aren’t aware of what time-outs we get for basketball season until the 45-minute mark before the game, so we basically don’t know what’s going on until we get there, and then we only have about a half hour to plan out everything we need to do for each time-out until the end of the game,” Stubenfoll said.

Even with the stress of feeling unprepared before games, Stubenfoll and other dance team members still try to give their best performance.

“As an underclassmen, it is hard to perform for every game, just because there is a bit of a preference toward juniors and seniors, which is totally understandable because they’ve been a part of the team longer,”said Liz Kazmierczak, Illinette and sophomore in ACES. “But everyone still gets the experience of performing at a game.”

There are 28 members on the Illinettes Dance Team, with 24 girls who perform at halftime and pregame for football, and 16 girls who perform at basketball games. Because not every member of the team performs for every game, the girls are required to audition each week for a spot during a game.

“We spend so much time together so, inevitably, we’ve become a family. I’ve never felt a sense of competition against my team members. My best friend, who’s also my roommate, might make a game that I won’t and vice versa, so I never feel competitive toward her. I feel competitive toward the people who make the decisions for who performs at what game more than anything,” Kazmierczak said.

If a dancer doesn’t happen to be chosen for that game, they still must remain a face of encouragement for the other teammates as well as the football players.

Positivity and support are two of the most important aspects the dancers keep in mind when on and off the field.

“You have to keep a positive outlook,” Mahacek said. “It’s a mentality we need to stay focused on. I feel like college dance teams in general have a negative stigma that it’s all about the look and the way your body looks, but I feel like in terms of the Illinettes, it’s so much more than that.”

When dancers first audition, Barry Houser, the Marching Illini band director, looks for students who will foster a positive reinforcement to the team, will remain optimistic in the face of defeat and who truly want to be there, Mahacek said.

“I want to be a better dancer always and feel like I can always take improvements, but I also want to be better for our team. There’s less of a competitiveness with others, but more-so with myself and how I can personally grow. I truly love it though, and love being involved in something so much bigger than myself,” Mahacek said.