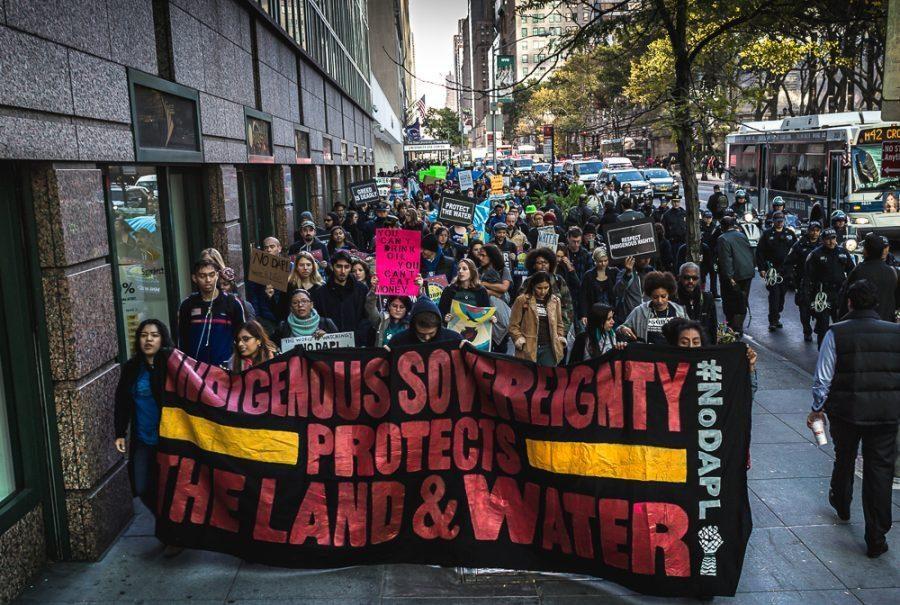 Hundreds of New Yorkers gathered at Grand Central Station in solidarity with the indigenous and non-indigenous allies who are on the front lines in North Dakota fighting the construction of the 3.8 billion dollar Dakota Access Pipeline on Nov. 1 in New York City.

For this year’s Ecofeminism Summit, the University invited LaDonna Brave Bull Allard, a Native American activist, for a meet and greet on Tuesday at the Native American House from 2-4 p.m.

Allard will also be giving a lecture at Allen Hall later that night from 7-8 p.m., followed by a Q&A.

For her lecture, Allard will talk about how she formed the first resistance camp, Sacred Stones, to protest the Dakota Access Pipeline project. Allard’s family owned part of the land on Standing Rock, so she was one of the core organizers of the resistance efforts.

She will also be talking about Ecofeminism, and how women can get involved with helping the environment in their local communities.

Allard will be here for the full day and will stay in the guest room of Allen Hall as a short-term guest of the University. During the visit, she will also visit a class.

“For us, the Ecofeminism Summit represents a way to talk about social justice and environmentalism as interconnected and intersecting,” said Rachel Storm, assistant director of the Women’s Resources Center.

“A lot of our social movements that aim to protect things like environmental protection or social justice efforts are often organized by women,” Storm said. “Women are frequently put into the position of being caretakers not just in families, but caretakers of our communities.”

She also explained how this year’s speaker is a little different from previous years. Storm said some past speakers have focused on waste management and water conservation.

Thereza Lituma, sophomore in FAA and president of the Native American and Indigenous Student Organization, said students are excited to meet Allard.

According to the Office of Inclusion and Intercultural Relations, there are 35 students on campus who are Native American, which is about 0.08 percent of the student population. However, those with Native American heritage, as well as allies, are brought together in the Native American and Indigenous Student Organization to fight different social issues that are important to them.

“We are a bunch of students from different backgrounds,” Lituma said. “We’re all from different majors. Some are tribally affiliated, some have indigenous backgrounds and some are just allies. It’s kind of like a mixture of us coming together with heritages; we come together to fight on different issues that affect us all.”

In addition, Lituma finds that Standing Rock has brought the Native American community together.

By December 2016, 10,000 people were camped at Standing Rock and 200 different tribes were represented, showing the unification of Native American culture.

The club held several events last semester in order to create awareness about Standing Rock in the C-U area. This inspired drop-offs to send students to Standing Rock or music benefit concerts to raise money for the protesters.

“Seeing how something as being pushed off your land for what will destroy the environment, it’s such a critical thing that you have act — there’s not waiting and hoping that it’ll get better,” Lituma said. “It’s really a cry of, ‘We need this justice for our people,’ and it’s a way to get our voices confirmed that we are standing together on this issue.”

Storm agreed with Lituma that education is important because there was such little coverage about Standing Rock in the media. Lituma said much of the information surrounding Standing Rock was being shared through social media, text messages, phone calls and mail.

“It also represents the needs for increasing the coverage of these kinds of stories — stories of conflict and resistance,” Lituma said.

To Lituma, events such as the Ecofeminism Summit are important because they help to create awareness and give aid to the Native American community.

“I think we as an organization try and team up for different efforts like this because we see an importance in standing together with the Women’s Resources Center and the Native American house and how that collaboration allows us to promote education through this event as well as learning about the issue,” Lituma said.