Students struggle for citizenship after immigration 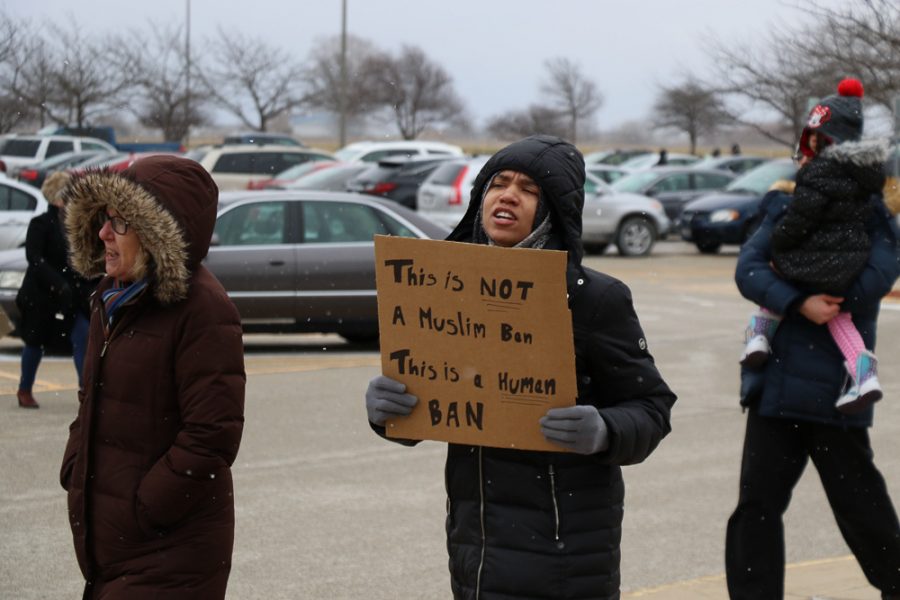 Protestors march in response to President Trump’s first travel ban in front of Willard Airport on Jan. 29. Students without citizenship face detrimental consequences because of the ban.

Zahir Abdul was only 12 years old when his entire life changed.

Abdul’s father was on his way to work when a young man blocked his way into his car. Suddenly, the man pulled out a gun and started shooting.

One bullet passed through his body, and another was lodged centimeters from his heart.

At this moment, it became clear that it was no longer safe for Abdul and his family to stay in their home country of Iraq. The hospital banned Abdul’s father from staying in the hospital overnight, fearing the shooter would return. Abdul’s father stayed in a hotel.

The next day, Abdul, his sister, his mother and his father left and began their journey to the U.S.

“The situation in Iraq after the Iraq-American War was very bad, to the point where my family’s lives were in danger,” said Abdul, sophomore in LAS.

The University is home to many immigrants from all over the world. International students come to the U. S. to seek a better life and a better education. But there is a vigorous process that each immigrant must go through in order to become a citizen of the U. S.

Most immigrants start with a green card when they come to the U.S. and then later apply for citizenship. In order to do this, people have to go through eligibility tests, paperwork, fingerprinting, background checks and citizenship interviews.

Once they are approved, immigrants must take an oath to officially become a citizen of the U. S.

Rafi Stifelmann, sophomore in LAS, officially became a U.S. citizen on Feb. 16 with the rest of her family. She has now been living in the U.S. for about 10 years.

“I was really excited because it’s been a long time coming,” Stifelmann said.

Abdul, however, had a different process since he was a refugee. He had to wait a year before he and his family could receive their green cards. They then went through the usual citizenship process, which took five years.

“The whole purpose of them moving here was to give us a home here,” Abdul said. “For us to have that citizenship kind of signifies that there’s nothing to affect that.”

The immigration process has become different following the new immigration ban. The ban prohibits entrance into the U. S. from six primarily Muslim countries: Iran, Libya, Somalia, Sudan, Syria and Yemen. This means refugees, new immigrants, green card holders and visitors are all barred from coming into the U.S.

Iraq was included in President Donald Trump’s original immigration ban but was removed during a revision because Iraq could be an ally against ISIS.

Dmytro Lukhtai, junior in ACES, moved to the U.S. from Ukraine in 2001 when his stepfather received a job offer in Champaign. Currently, Lukhtai is in the U.S. with his green card, but he is waiting on a date to go to Chicago for the verbal test. If he passes, he will become a U.S. citizen.

While Lukhtai understands why a policy like this was implemented, he does not believe that this particular plan is effective.

“The way to go about this is not to ban students, not to ban people who actually work and contribute to this society,” Lukhtai said.

Stifelmann has a similar stance when it comes to the immigration ban.

The ban has made Stifelmann realize how lucky she is to have been able to stay in the U.S. for so long and to receive her citizenship so quickly.

When Abdul first heard about the ban, he was in shock. It was something that he had brushed aside when Trump ran for president, and never expected to actually happen. But when he started researching the topic and realized that it was happening, he felt a wave of anger go over him.

“I was angry about what was happening and that people were letting it happen,” Abdul said.

While a majority of his family members are U.S. citizens, one of his brothers is still in the process. He currently has his green card, which could get denied because he is not an official U.S. citizen.

Abdul’s biggest fear when it comes to the immigration ban is not knowing what will happen next for people coming from these countries.

“When is it acceptable for us to say ‘OK, now this is too much?’” Abdul said. “I’m scared of where this is headed and what direction it is taking.”

Abdul thinks that it is important for students at the University to remember that everyone is human. He wants to remind students to do their own research and learn about people and their cultures before they make judgments.

“Don’t forget that at the end of the day, we’re all humans,” Abdul said. “Everybody’s here trying to survive.”