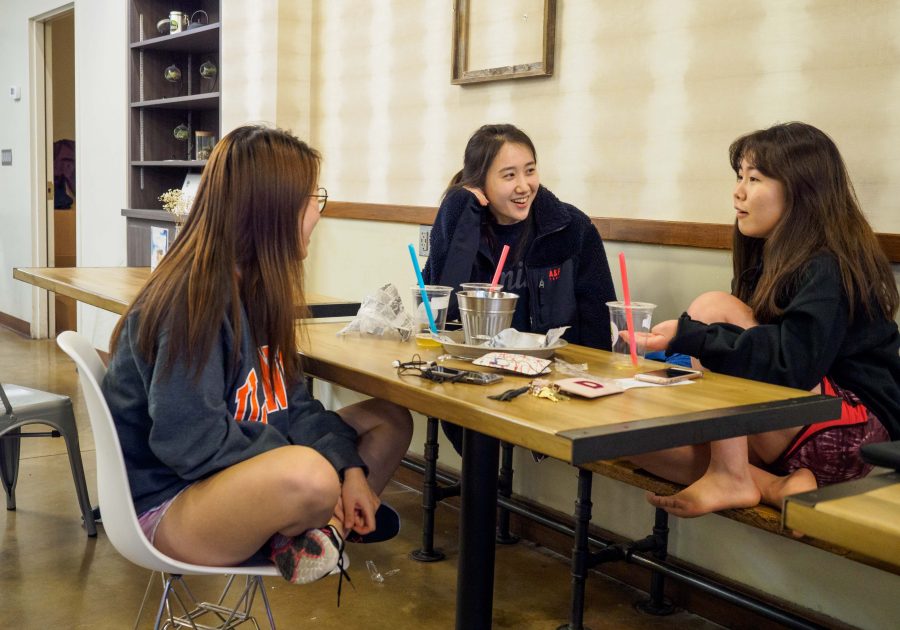 Students chat at the Latea Bubble Tea shop on Sunday, March 26. Some students prefer LaTea now that ChaTime is closed.

The popular Taiwanese bubble tea shop on Green Street, Chatime, has closed unexpectedly and for an unknown amount of time.

The shop has been closed since February and shows no signs of reopening anytime soon, or if it will re-open at all.

Because of the uncertainty surrounding the closed shop, rumors have started to circulate campus as to why the shop closed and if it will reopen in the future.

Karina Chan, freshman in LAS, was a big fan of Chatime.

“I’m not the biggest fan of milk tea, so I really liked their large selection of juices. I’d always add boba and jelly to mine and rotated between different juice flavors,” Chan wrote in an email.

Some Chatime customers, including Chan, were surprised and disappointed that their favorite bubble teas and other beverages are no longer available.

“I’m absolutely devastated; I loved Chatime. It always made my day to be able to go there and grab some juice, boba and jelly, and could cheer me up no matter what. I’m still really upset about their closing and am hoping they’ll open up again,” Chan wrote.

Because Chatime is closed, loyal customers have turned to other bubble tea options on campus. One option that has become popular among previous Chatime customers is Latea, located on South Sixth Street.

“I’ve pretty much switched to going to Latea full time. They have regular flavored tea as well as milk tea, so I typically order a fruity flavored green tea to replace the juice I used to get at Chatime,” Chan wrote.

Jiabao Li, freshman in DGS, also has chosen to go to Latea more often because of Chatime’s closing.

Li said what made Chatime unique was the quiet, but friendly atmosphere. Chatime also had a selection of board games that made the experience more enjoyable and relaxing.

“It’s less loud (in Chatime) … The tables are laid out in a more user-friendly way, so that you can kind of see what everyone is doing and just hang out,” Li said.

Chatime’s possible reopening has been highly anticipated by customers eager for the shop to recover.

After Chatime closed, a sign was posted on the door stating that the business is closed for renovations, and will be reopened again soon.

“Supposedly they’re only closed for a month or so for renovations, so I’m definitely hoping they’ll open back up after that, but I’ve also heard Chatime will be replaced with another place that will serve food and boba,” Chan wrote.

After closing the bubble tea shop, Chatime’s owner has partnered in opening Ozu Ramen, a Japanese-style restaurant located on South Sixth Street. The owner declined to comment to The Daily Illini.

Cindy Tan, senior in Media and marketing manager for Ozu Ramen, said although the restaurant had to temporarily close, it is actually a good thing because it shows how successful business has been so far.

“Basically, when we first started, we didn’t expect to have such a great rush of people, which we’re not complaining. Business has been superb the first couple weeks which is fine,” Tan said. “We had to temporarily close because we ran out of supplies and even when we went to buyers they didn’t have enough ingredients for us … It’s a great thing actually.”

Li said she is satisfied with Ozu Ramen’s menu but she hopes the owner will re-open Chatime in the near future.

“I just want them to open Chatime again and to have that quality bubble tea again,” Li said.