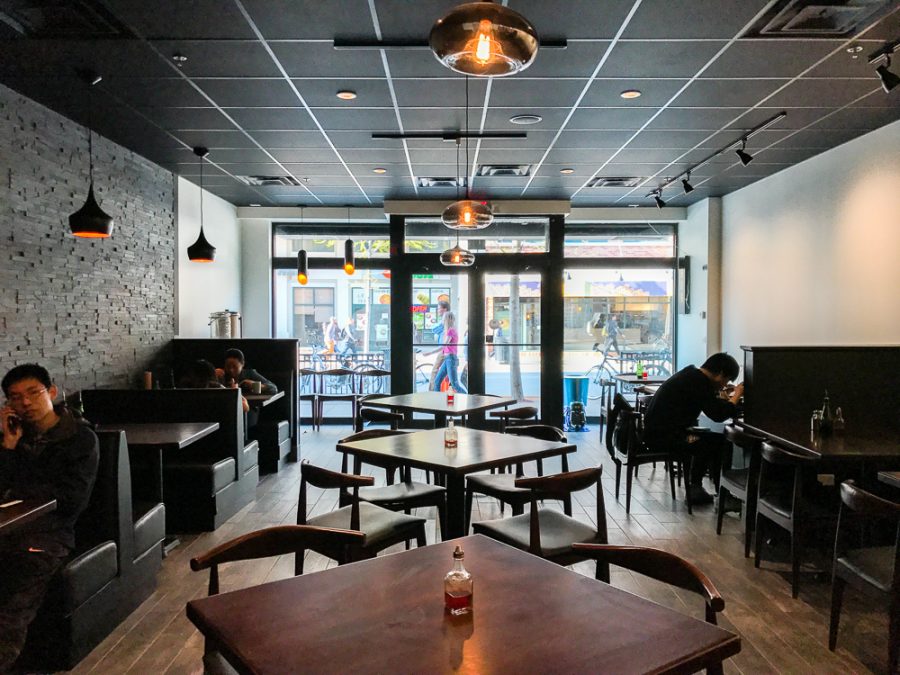 The inside of Mid-Summer Lounge restaurant, located on the Green Street, Apr.12.

Students have many options for dining at on-campus restaurants. Green Street is lined with different cuisine types to satisfy any craving, from fast food to pineapple pizza, tacos and Thai ice cream.

A new restaurant in Champaign, Mid-Summer Lounge, is adding to the selection while providing a new, authentic experience to students that is not typically found at other Green Street restaurants.

Dai came up with the idea in 2015 when he realized how much the Asian population on campus was growing. He said roughly 10 percent of campus is Chinese, which is one of the more prominent Asian populations at American universities.

“I think there’s a need for it. We’ve got a few Chinese places down the street, all different variations of Panda Express,” Dai said. “I wanted to bring something new, something that looks different and tastes different, and has a strong appeal to Asian people.”

Dai decided he wanted to open Mid-Summer Lounge to bring this unique authenticity factor to Champaign. He received consulting advice from his uncle who is in the construction business, and then went through the process of opening the restaurant by himself.

The restaurant’s name comes from Dai’s personal experience: “mid-summer,” which is the hottest time of the year. The middle of the summer reminds Dai of his childhood when he, his friends and family would gather in the streets and eat dumplings. Dai wanted the restaurant to reflect this same idea of providing a gathering place for friends and family to enjoy quality time together.

“I want people to gather in this place, have really good food, and chat with each other. Not only in winter, not only summer but throughout the whole year,” Dai said.

The restaurant only serves two types of food: dumplings, which are popular in northern China, and noodles, popular in western China.

“I was born there and spent half of my life there so I know what it tastes like,” Dai said. “It’s not hard to bring that recipe here, but it’s about how to find the right target and position yourself in the right marketplace.”

Belinda Wang, junior in business and restaurant employee, heard about Dai’s establishment from a friend and said she thought the chance to work at an authentic Chinese restaurant would be a great opportunity.

Wang said she too believes that the restaurant is very different from other Chinese restaurants on campus. She knew that a lot of Chinese students would be looking forward to dining there because of the level of authenticity.

“Most of the other Chinese restaurants tend to Americanize their menus and the food options. Mid-Summer Lounge is very authentic Chinese food,” Wang said. “They only have a few options but I think they also do the most authentic way to make it. It really tastes like the way it tastes in China. That’s one of the most attractive points to attract people and that will be the selling point.”

In Iok, graduate student in ACES, dined at Mid-Summer Lounge in March and had a positive experience eating there. Iok runs her own food blog on Facebook. She said her thoughts aligned with the goals of the restaurant.

“It’s pretty authentic Chinese noodles and they present it well. It looks really good on the plate, and for the price, there’s a lot of meat,” Iok said.

However, Iok said the outside decor of the restaurant involved more of a fusion of western and Chinese cultures. With just a black canopy outside with the restaurant’s name, it might not be as obvious to pedestrians what kind of restaurant it is.

Dai believes this simplistic concept is what adds to the restaurant and makes it so unique.

“The decor is more contemporary and minimalistic. I want the whole restaurant to be simple, but the color itself reflects old traditional paintings and architecture — white, green, and black. I want to convey to our customers that our food is simple and our decor is simple, and that’s what I think of the Chinese culture in my mind.”

The authenticity of the restaurant potentially poses a cultural barrier for some students, as they may not be familiar with certain dishes. Even though customers can order in English, Wang said that the majority of customers are Chinese.

“A lot of American students have not tried the food before,” Wang said. “And there are no pictures hanging outside so they might be scared to step in, but more and more American customers are starting to come in.”

For the first two weeks, menus were only in Chinese, but English menus were quickly added after the staff realized it caused a large language barrier. With these new menus and all of the counter staff speaking English, Dai said he does not believe language is an issue when non-Chinese customers come to the restaurant.

The plans for the future of the restaurant are unclear. Dai’s hopes simply include that the restaurant continues to bring the community together and can provide a new dining experience for members of the Champaign-Urbana community.

“I don’t see opening a restaurant as having a huge success of my own,” said Dai. “It’s hard to define what success means. But I only think about bringing benefits to people.”