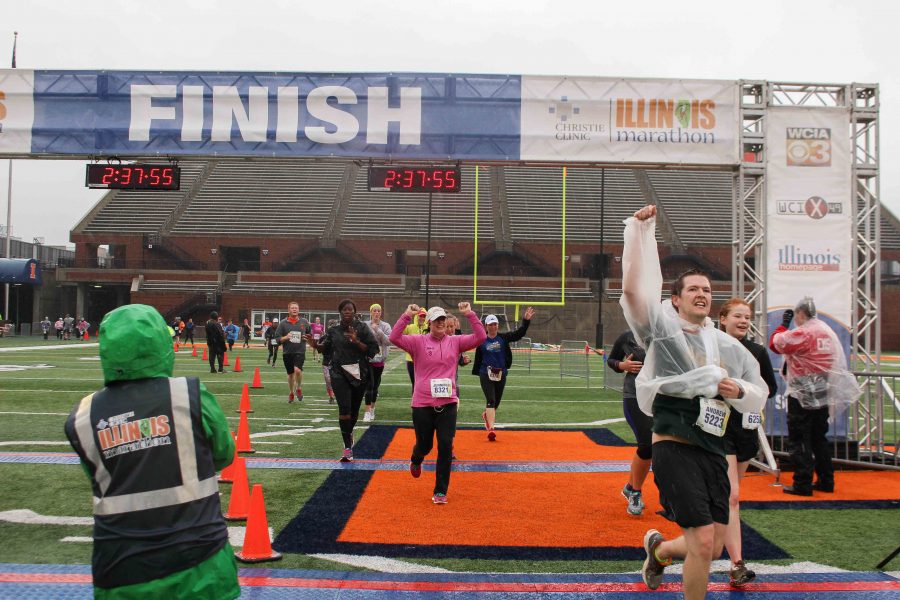 While most University students recognize Memorial Stadium as the location of the Illinois football team, the stadium will be representing another form of athleticism this week: the Illinois Marathon.

Runners will show off their months of preparation by crossing the finish line at the 50-yard-line in Memorial Stadium.

The six races held from Thursday to Saturday are the marathon, half marathon, 10K, 5K, marathon relay and youth run. The proceeds will be going to 50  charities in the Champaign-Urbana area. In addition to these  races, there will be a wheelchair half marathon.

If a participant runs the 5K on Friday and the 10K, marathon, half marathon or marathon relay on Saturday, the runner will receive an I-Challenge medal. Completing any of the races provides participants with various goods such as medals, drawstring bags, and T-shirts and refreshments.

Ryan Lenhart, senior in ACES, will participate in his first Illinois Marathon this weekend.

“I’m looking forward to seeing my end result finish time,” Lenhart said. “I’ve been running on pace to qualify for the Boston Marathon, so it will be great to see if I can beat my goal.”

Lenhart has completed two half Ironmans and plans on completing a full Ironman in the fall. In order to prepare for the race, Lenhart has been running four times a week, including long-distance running on Saturdays and swimming on his off days.

Jan Seeley, director of the Illinois Marathon, said there will be 20,000 runners participating this weekend. When the race began nine years ago, there were only 9,200 runners. Seeley said that this year, there are runners from almost every state and 14 different countries.

Seeley believes that the race is a great opportunity for the Champaign-Urbana area.

“This race has done a wonderful job of bringing together Champaign-Urbana and the University in one very collaborative event. It brings $10 million dollars of economic impact to city in one weekend,” Seeley said. “The race is a good way to get people off of the couch and moving. It makes a lot of people healthier.”

Maor Kramer, junior in LAS, will not run in the race this year but had only positive things to say about his experience participating last year. Kramer prepared for the marathon by running roughly 40 miles a week and adjusted his running to increase his pace as his runs went on.

“It was a pretty awesome experience. It was great getting to run a race on my college campus, and I enjoyed running through areas of Champaign and Urbana me and most students never see,” Kramer said. “The volunteers were fantastic, there were lots of spectators, and as a big Illinois football fan, it was fun getting to finish on the 50 yard line of the field.”

In addition to the marathon, Kramer went to the Health and Fitness Expo at the ARC. This year, the Expo will run on Thursday from 4 to 8 p.m. and on Friday from 10 a.m. to 2 p.m. On Friday, there will be a pasta feed hosted by Biaggi’s.

“I went to the expo at the ARC, picked up my race bib and packet and listened to one of the speakers that came. His name was Dave Mcgillvary; he is the race director of the Boston Marathon,” Kramer said. “As someone who ran in the Boston marathon and is a big fan of the event, it was a pretty awesome experience getting to hear him speak, he has a pretty remarkable story.”

In addition to the Expo and the actual races, the marathon will host two events, one called the 4th Mile and the other known as the Meijer 27th Mile Celebrate Victory Bash. The 4th Mile will run from 6:30 to 10 p.m. just outside Memorial Stadium on Friday.

There will be live music and food trucks, and those who entered the 5K that are at least 21 years of age will receive one free beer ticket.

The Meijer 27th Mile Celebrate Bash will be on Saturday from 8 a.m. to 2 p.m. outside Memorial Stadium. Similar to the 4th Mile, there will also be live music, food trucks and a free beer ticket for those who are 21 and above.

Seeley is proud of how the whole community comes together to create these additional events for runners and community members.

“The communities of Champaign-Urbana do a great job of putting together a great hospitable weekend, and we are lucky to have the event here in this incredible city,” Seeley said.

Kramer believes that first-time participants will have a rewarding experience this weekend.

“It’s a really fun and friendly event. If you’re someone who is just getting started in running or in racing any distances, this is really a great event to be a part of,” Kramer said. “It’s a great atmosphere, and a really friendly event.”