Blueberry and blue guys: Penguin is a hit at KAM’S 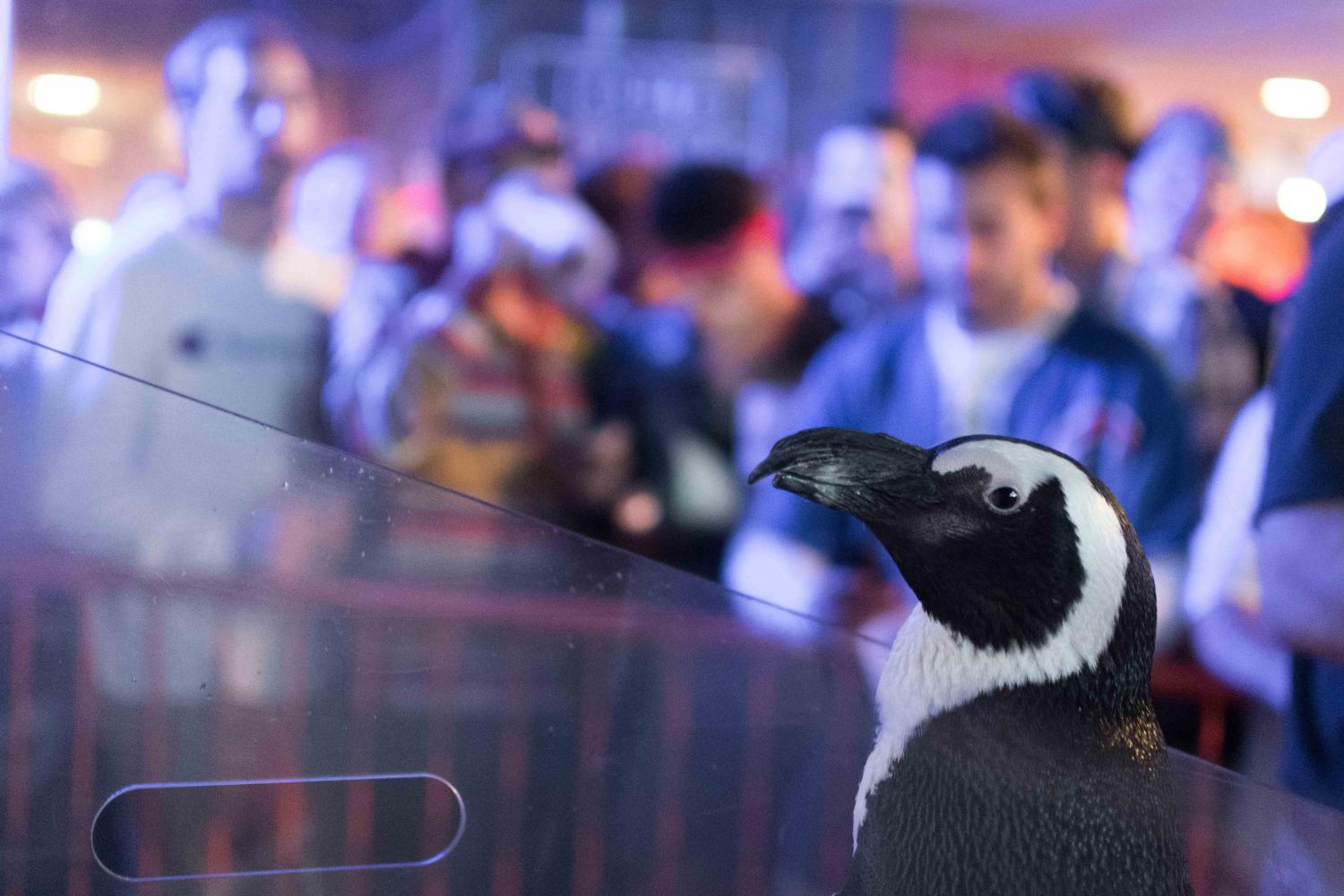 Blueberry, an African penguin, poses for photos at KAM’S happy hour Friday. The Wave Foundation in partnership with KAM’S held the event Friday to raise money for African penguins that are currently on the verge of extinction.

Happy hour at KAM’S Friday had all the usual components: students enjoying Blue Guys, various bar crawls and the music hits blasting throughout the bar.

But instead of the usual scene of dancing students on the stage,  a podium with an open glass enclosure housed Blueberry, an eight-year-old African penguin from the Newport Aquarium in Newport, Kentucky.

KAM’S, in partnership with the Wave Foundation, hosted the event, raising money to help save the African penguin, which is on the verge of extinction.

Bringing Blueberry to KAM’S has been in the works for months.

Zach Meyer, former manager of KAM’S and son of KAM’S owner, Eric Meyer, left his job at the bar four and a half years ago to work for the aquarium as an animal husbandry volunteer with the Wave Foundation.

In October, Zach’s father went to the foundation’s largest fundraiser of the year, Nauti Nite.

Dunlap takes penguins from the Aquarium to bars and other large-scale locations like the home of the Cincinnati Reds, The Great American Ball Park.

So the idea to bring one of the eight female penguins from the Aquarium to KAM’s seemed an accomplishable goal.

Zach said he had high hopes for the event.

KAM’S charged a lighter $3 cover with all proceeds going to penguin conservation and the Wave Foundation, and gave students a souvenir mug to commemorate Blueberry’s visit.

“I expect them to be really excited. Champaign doesn’t have the luxuries of a zoo. People love penguins. Normally you need to pay money and this case you can be right up next to them,” Zach said.

“You’ll be able to take pictures and touch her. You get to see an animal that you don’t get to see up close and in person and think ‘wow, that’s cool.’”

When Blueberry was first put on the stage, the crowd loudly started chanting her name and quickly got in line to get pictures with the celebrity of the night.

Dunlap said he saw the event as a way to promote advocacy for African penguins, an endangered species.

He said humans are taking away the penguin’s natural habitat by building on beachfront property.

“Our whole purpose is to inspire the community to save the animal.”

Animal welfare is important to both Dunlap and Zach.

Their main reason for bringing the bird to campus was to show students that these animals need saving.

“Once you meet one of them, you fall in love with them and you want to help out to save the species,” Dunlap said.

Alice Kenny, freshman in LAS, attended the event, but was concerned before arriving about the animal’s safety.

“It’s pretty unusual. I’ve only seen penguins at the zoo. I don’t know if it’s a good idea to bring a penguin to a bar when it’s not cold outside,” Kenny said.

“I’m not sold it’s a great idea overall but I would like to be there for history being made.”

However, Max Janczak, junior in AHS and manager of KAM’S, took the highest of safety precautions before Blueberry arrived so as not to put the bird in harm’s way.

“I’m not worried about it. The handlers will be there and we will have more doormen to make sure that nothing happens,” Janczak said. “We will guard the area.”

Dunlap said he can understand why those like Kenny could have been concerned about an animal surrounded by drunk students.

That is also why Blueberry was at the bar from 5 p.m. until 8 p.m. to avoid the rowdier night crowds.

“We are going to be right on top of Blueberry at all times. I’ve built relationships with the penguins over the years. My number one priority is the safety of the animal,” Dunlap said.

“There are certain signs a penguin shows when they’re happy or stressed and I know all those signs very well. I don’t foresee any issues happening tonight. We are well prepared.”

Overall, Zach believes that the students who attended the event had a memorable experience with Blueberry.

“It’s something you can go home and talk about. This one time I was having a Blue Guy and I saw a penguin,” Zach said.

“You don’t get that at many places, if at all. It’s a unique experience that most, if not all students, would want to see or be a part of. My dad knows how passionate I am about this. I left my job at KAM’s to pursue this. It holds a special place in my heart.”