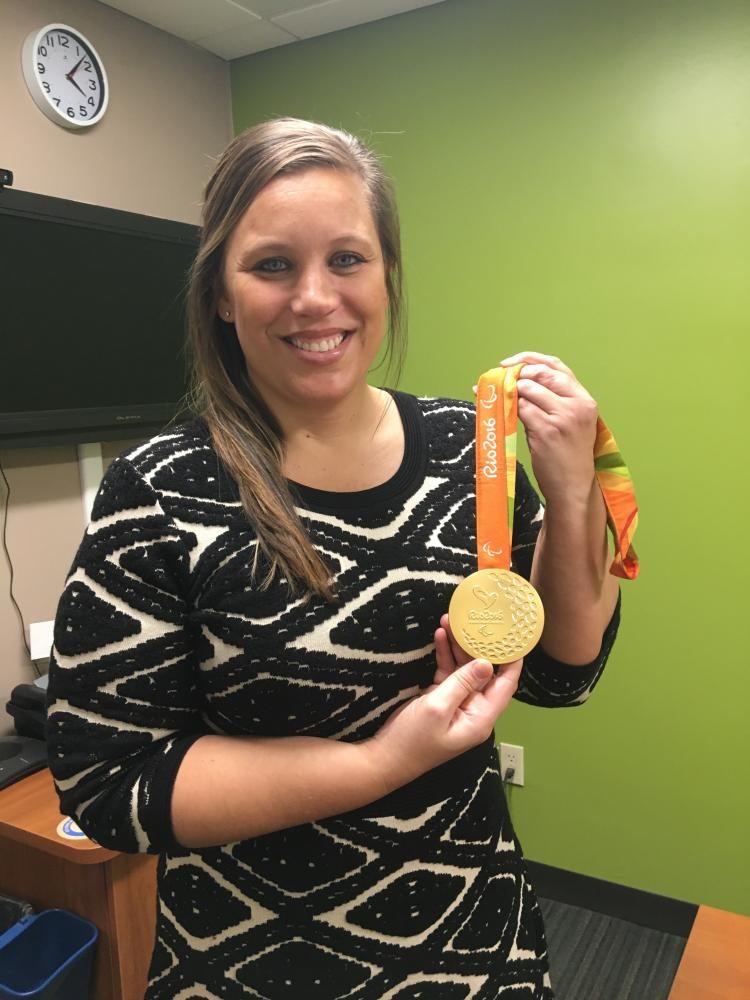 Nicole Millage holds up her gold medal from the 2016 olympics in Rio. Millage competed in the sitting volleyball games.

For Paralympian Nichole Millage, taking a stand and representing her country involves sitting down. After a boating accident left Millage with an amputated lower leg, she turned disability into ability and won a gold medal with the the United States women’s sitting volleyball team at the Paralympics.

“Obviously not a great day at the lake, or anything that anyone ever wants to go through,” Millage said. “But everything that happened that day led me to where I am today; it led me to sitting volleyball, which I wouldn’t change for anything.”

Women’s sitting volleyball did not become a Paralympic sport until 2003. The Paralympic Games are Olympic level competitions played by athletes with disabilities, usually taking place three weeks after the Olympics. The U.S Paralympic team competes nationally in 25 sports, including sitting volleyball. Athletes in sitting volleyball sit on the court and use their upper body strength to move. The court is modified to include a lower net and smaller court size.

Champaign native Millage has competed in three Paralympic games. In 2016, Champaign had five natives, including Millage, compete in the Paralympics. With Millage, the United States women’s sitting volleyball team won a silver medal in both the Beijing games in 2008 and London games in 2012. In the 2016 Rio games, the team won the gold medal.

“Finding a team like this and being a part of a team like this, you are all the same,” She said. “You are all competing at this high level in the sport that you love to play and you do not see each other as disabled.”

Millage, who is about to turn 40 years old, lost the lower part of her left leg in a boating accident in 1998 while on Clinton Lake in Clinton, Illinois. Millage was sitting on the front of a boat when an intoxicated driver turned sharply, causing Millage and the other person she was with to fall off the boat.

“When I fell off the boat, my left hand and left foot got hit by the propeller,” she said.

The other man with Millage died immediately from his injuries.

She attempted to climb back on the boat, but did not realize how serious her injuries were at the time. She was rescued, brought to Carle Hospital in Champaign and was then airlifted by helicopter to a hospital in Springfield, Illinois for further care.

“I knew I was hurt, but I did not know at the time how badly I was hurt,” she said.

In addition to her amputation, Millage’s left hand was left severely injured by the propeller. While she only spent one week in the hospital, she endured multiple hand surgeries the year following the accident. A scar is still visible on Millage’s left hand. Her middle finger was nearly severed and is now fused into a more natural position.

Her Olympic experience would not have been possible without her transition from regular life to amputee. When transitioning, Millage used a wheelchair for a few months. She only used the wheelchair in the time after her accident until she was able to get a prosthesis made to fit her leg.

At the time in 1998, Millage said prostheses weren’t anything like they are now. She ended up finding a prosthesis specialist to work with in Effingham, Illinois. Between the commute and the fitting, the process was not easy.

“The hardest part for me in the whole experience was getting a leg made and going through that process,” she said.

Walking into the interview, it was clear the amputation does not affect her mobility. Millage explained her prosthetic leg is easy to put on because she is only missing about six inches above her ankle.

The Paralympian discovered her interest in sitting volleyball while serving as a chaperone for a children’s adaptive sport camp in 2004. The camp introduced children with disabilities to adaptive sports, or sports modified to accommodate differently abled bodies.

Because of her past experience playing volleyball, the Paralympic U.S. women’s sitting volleyball team wanted her to play.

“Anytime they (the U.S. team) find someone with any type of volleyball skills and is also an amputee, they pounce on it and encourage you to come try out,” she said.

At age 28, with a lot of convincing, the soon-to-be Paralympian left her job at a Champaign law firm to go the Paralympic training camp in Edmond, Oklahoma.

“A year into it I realized I loved the sport and wanted to get better,” she said. “I sold my house, got rid of my dogs and moved to Oklahoma which is where the Paralympic team trains.”

Moving to Oklahoma meant training full time. This training led to her first Paralympics in Bejing. For Millage, the games in Beijing were most memorable. Specifically, because of the opening and closing ceremonies.

“Walking into that stadium and having it completely full, it was beyond amazing,” she said.

In London, the closing ceremony had performances by musical artists Coldplay, Jay Z and Rihanna.

“They were right in front of us and we were like, ‘this is not real life.'”

However, winning the gold at the Rio games was perhaps her team’s biggest accomplishment.

“It was great because you get to hear your national anthem, finally,” she said. “It was just a very proud moment, finally 11 years of doing this all worked out.”

“Matt Lauer is not staying in Rio for three more weeks waiting for the Paralympics,” she said.

However, Millage is finding her sport is slowly getting more recognition.

Getting the gold Rio meant beating the Chinese Paralympic sitting volleyball team, a team Millage said is her team’s biggest competitor. Last March at a competition in China, before the Paralympic games in Rio, Millage’s team beat China’s team for the first time. Millage said this gave her team confidence going into the Rio games.

“Not only did we beat them (the Rio games), we crushed them,” She said. “They are beast, they know the sport so well and they have amazing ball control.”

As Millage held her gold medal, during the interview in the Champaign Public Works Department, her pride was evident.  She explained the medal has weighted beads in it for the vision impaired Paralympians. The bronze medal is the lightest and the gold medals are heaviest.

This was the medal that Millage wore as the U.S. national anthem played, a moment she will never forget.

Perhaps the proudest audience members were Millage’s parents, who attended all three Paralympic games. Millage’s mom, Philomena Schnepper, said she was lucky enough to go with her to the games.

“It was totally awesome to know where she started and then here it was, the gold medal,” Schnepper said. “To sit there and watch her accept it and to listen to the national anthem, it was the greatest.”

“As a parent, you sit there and look at everything that has been taken away,” she said. “As she got involved in sitting volleyball I could just see her change. I watched her grow as a person. I watched her get stronger.”

The Paralympian’s stepfather, Dave Schnepper said he was proud to watch Millage win the gold and said the feeling was overwhelming.

“Being proud is one thing, it just overwhelms you,” he said. “Being there watching your daughter get a gold medal over her head is just amazing. To watch the American flag being raised, it was a tear jerker.”

Her parents said the recovery process was not easy, but she came a long way. Millage’s love for her team, or as she says her extended family, stems from her not knowing any other amputees before her accident.

Millage said her team works hard to compete, like any other athlete. The team has traveled all over the world together. Millage said some of the highlights include Egypt, Morocco, Russia, Netherlands, Ukraine and Poland.

“Never in my wildest dreams did I ever think I would see those places,” she said.

Playing sitting volleyball still requires caution for Millage. In order to travel and compete all over the world, Millage has to take safety precautions when playing. In sitting volleyball, arm movement is important so Millage said she wears a brace and tapes up her fingers.

“Considering that my hand went through so much trauma and everything, it is amazing I can play sitting volleyball,” Millage said. “I have to wear a brace and I tape up my hand. I have to deal with some pain from that, but it is worth dealing with it to play the sport I love.”

After 6 years of training and Paralympic games, Millage moved back to Champaign. Currently, she is the environmental sustainability specialist for the Champaign Public Works Department.

When she first started working with the city, Millage was a project specialist and helped create the city’s Americans with Disabilities Act transition plan. This plan was designed to update accessibility codes among sidewalks, curb ramps, buildings and parking lots.

“I was interested in it because I have been in a wheelchair, I can relate,” she said.“I know it is important; I am part of the disabled community so if I was going to do anything I would want it to be something that was also personal to me.”

Millage continues to work for the City of Champaign. With three medals under her belt, this is not the end for Millage.

While she thought she would retire after her Rio games, she possibly is ready to take on one more. She just went to the training camp in February to be with her team.

“It was like no time had passed. I played again and I was like, I can still do this,” she said.

The U.S. Paralympic sitting volleyball team will compete in the World Championships in the Netherlands next year.

She says this would be full circle because her first big tournament was held in the Netherlands in 2005.

The next Paralympics will be in Tokyo in 2020.

“This would be a hard time to walk away because we are at our peak. You are having the most fun when you are playing your best,” Millage said.