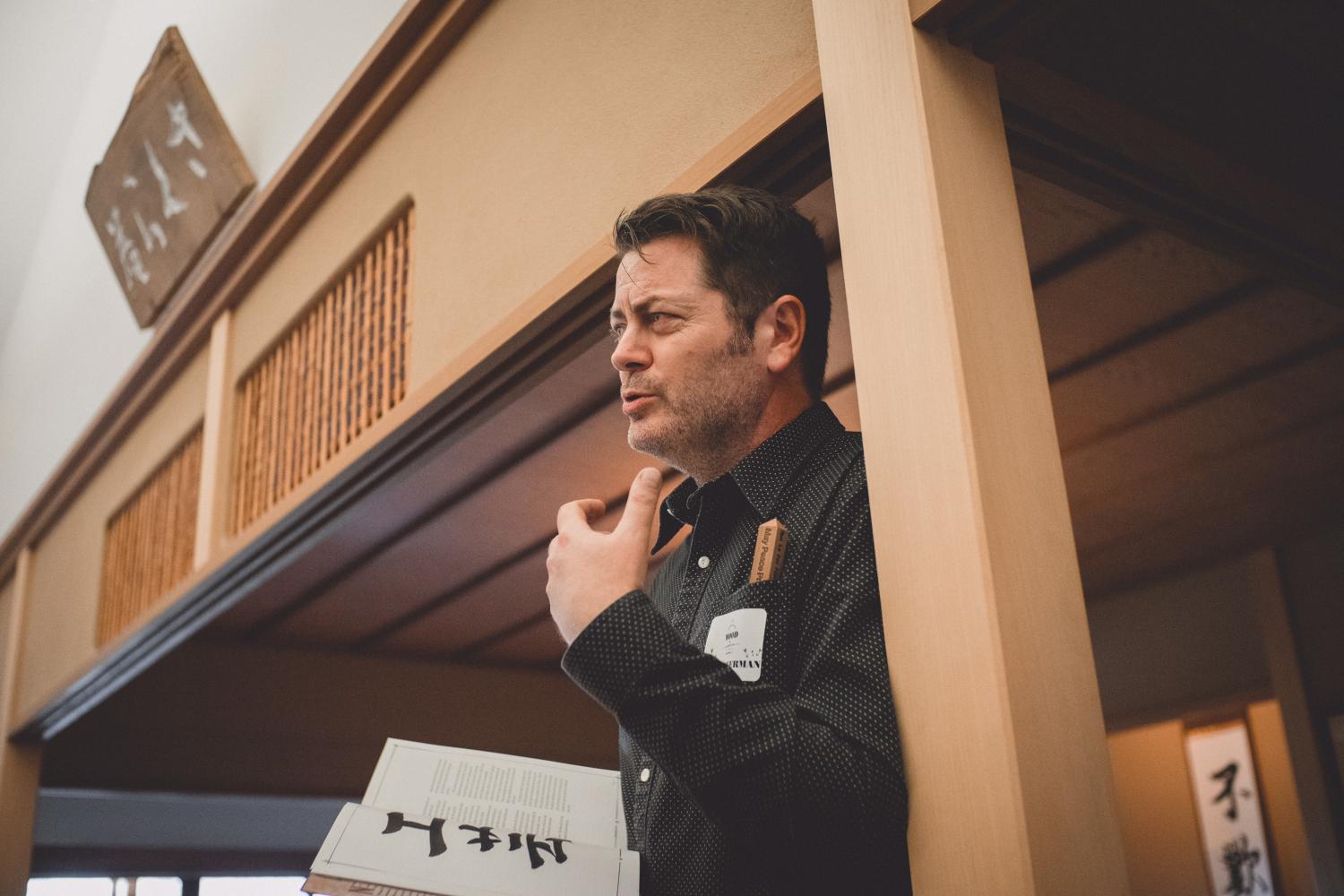 Photo courtesy of the Japan House

Nick Offerman at the Japan House during one of his many visits to the University. Offerman will speak Saturday at the Main Commencement.

By Joseph Longo, Managing Editor for Reporting
May 12, 2017

It can be hard to tell when Nick Offerman is joking. He holds onto a signature unbreaking deadpan, waiting until the last possible moment to release a childlike giggle. And then it’s obvious – he’s joking.

It’s a balance of frank outdoorsman and warm-hearted progressive that he’s best known for, even when playing Libertarian Ron Swanson on “Parks and Recreation.” The character, he admits, isn’t too far off from the people he grew up with.

The University recently announced Offerman, an ’93 FAA alum, as the Commencement speaker. This was a surprise it could barely keep a secret, rolling out not-so-subtle hints on Twitter.

However, it’s not really a homecoming for the 46-year-old actor from Minooka, Illinois. He often comes to Champaign-Urbana once or twice a semester. Offerman keeps in close touch with the staff at the Japan House. He even designed them an azumaya, a Japanese gazebo, in honor of his sensei and mentor Professor Emeritus Shozo Sato.

But the actor is quite busy, making his ability to speak this weekend even more rare. Last night, he appeared on “The Late Show with Stephen Colbert” alongside his wife, actress Megan Mullally. They promoted their latest project, a television show on Epix, appropriately titled “Summer of 69: No Apostrophe.”

Given his hectic schedule, I was lucky to get a few moments with Offerman, who quickly informed me that he’s videotaping our phone conversation. I give him a quick wave. He then tells me my hair product is doing wonders. Again, his signature deadpan exudes a frankness that makes you second guess even the most obvious of jokes.

Offerman talked about replacing President Obama as the Commencement speaker, admitting it’s not an uncommon occurrence for him. He also talked about his time on campus, his love for Central Illinois and why he has no clue what goes on west of the Main Quad. 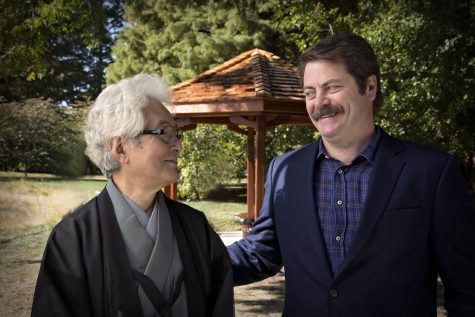 Photo courtesy of the Japan House
Nick Offerman with his mentor Professor Emeritus Shozo Sato outside the Japan House. In 2013, Offerman built an azumaya, a Japanese gazebo, on the grounds.

The Daily Illini: Why did you decide to come down to be Commencement speaker?

Nick Offerman: I’m very honored to be asked. I was at a fundraiser for Japan House very recently, and Chancellor Jones was there. He asked me if I could come do it. The current administrator of Japan House, Professor Jennifer Gunji-Ballsrud, gave a very nice address. She quoted Chancellor Jones, and his quote was really inspiring and moving. It was kind of a one-two punch. Suddenly, he was there. He said, “Hey, would you come give a speech?” I couldn’t really say no after you just called me to arms with his inspiring words. I love having the chance to suggest young folks to use good manners. This is, I understand, is a large number of young folks.

DI: I think we’re around 40,000 for our total school population.

NO: I guess I better open with a U2 song.

DI: You’ll have a packed stadium.

NO: I guess that’s a joke for my generation. Hilariously, it will be the first time I ever set foot in that stadium.

NO: Yeah, I’ve never been in there.

DI: We’re a sports school of course, but our football team isn’t always great. Were the teams any better when you were a student?

NO: I was aware of them. Football and basketball were very prominent. Theater major is just 24/7. You’re in the theater one way or another.

DI: You’re from Illinois originally. Was it just a given you’d come to the University?

NO: My situation was such that I had good grades in high school. I knew my affordability for college would be a state school. I got a scholarship from my local state representative that was only good for a state school. Coincidentally, I had heard about the University’s theater department. I’d been looking at the U of I anyway, and then I auditioned for the theater department. They apparently needed a couple of athletic, burly men to carry the good-looking people on and off stage. I lucked into it. It was very fortuitous.

DI: It sounds like you had a good experience at the University.

NO: It was very unique. One amazing thing about the school is that you can carve out your own world. Mine was all over around the nucleus of the Krannert Center. Just the Krannert Center itself is one of the most amazing facilities in the country, college or professional. People don’t realize what an incredible place that is.

I had no idea what was going on west of the Quad. For a pretty world-innocent kid from the small town of Minooka, it was ideal. It was the perfect, gentle introduction to the greater world beyond the cornfields.

DI: Were you aware of the student campaign to get President Obama as commencement speaker?

NO: It was Barry (Obama) who gave me a call. He felt bad he couldn’t make it, and he asked me if I could fill in for him. Which he’s done in the past a couple times for a couple break-dance competitions. I said I was happy to pick up the slack.

DI: Do you think you can fill the shoes of the former president?

NO: Of the greatest president in history? Probably not. (Megan Mullally and I) were at the Christmas party at the White House. My wife and I look up to him and his wife very devoutly. No, I would be nervous to audition to drive his pickup truck.

DI: Often Commencement speakers come from the Business and Engineering schools. Do you think it’s important to highlight the Fine & Applied Arts?

NO: Certainly in my day, but I believe it is still the case, the Fine & Applied Arts generally are not getting as much love from the college overall as the main courses. If you lay a little largesse on the arts department, you might end up with a student on television or something.

DI: You’re well known for your role on “Parks and Recreation.” Watching the show, Pawnee reminds me in some ways of central Illinois. Was that a connection you made?

NO: When they first pitched me the idea of the show, I thought, “Oh yes, I know these people.” I know exactly the clothes to wear and the pickup truck to drive to the audition. To my great fortune, they set the show just a few hours east of Champaign. It worked out alright for this kid.

The article has been edited for length and clarity.

Correction: An earlier version of this article misspelled Shozo Sato’s name in a photo caption. The Daily Illini regrets the error.