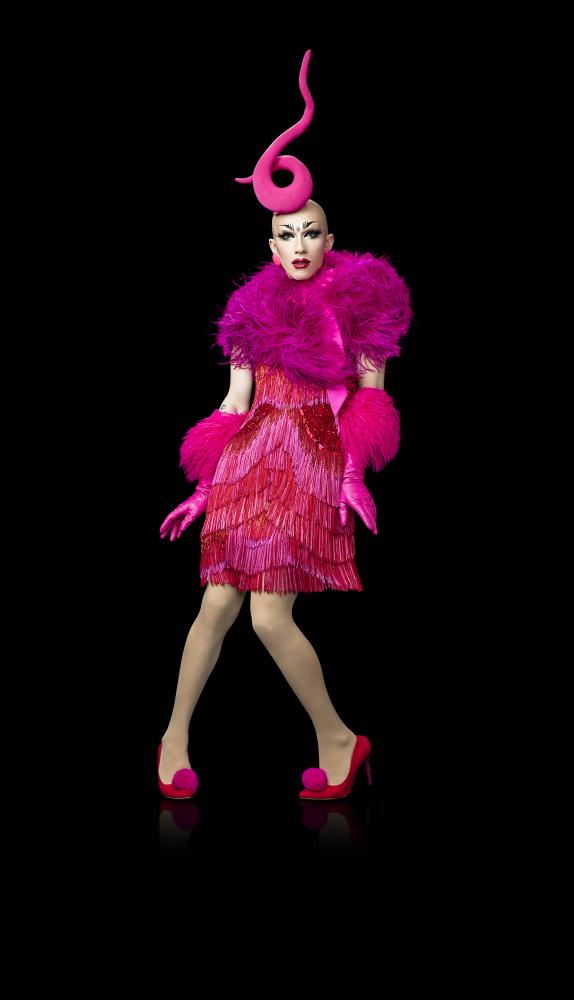 By Joseph Longo, Managing Editor for Reporting
May 19, 2017

Born Sasha Steinberg, Sasha Velour routinely visits Russia with his father, Dr. Mark D. Steinberg, who is a University professor in Russian history. Mark travels to Russia and Eastern Europe most summers, buffing up on his knowledge of the region, its people and their history.

The father and son, along with John Jacob Lee, Sasha’s partner, were traveling from Russia to England to visit Mark’s cousin in Stratford-upon-Avon. Then RuPaul called.

When RuPaul calls, you cut your vacation short, buy last-minute tickets and spend time at a British dive bar while you wait for your plane back to New York.

At a little bar in Stratford-upon-Avon near the Royal Shakespeare Theatre, Sasha and Mark made a plan. Sasha would need to pack, design costumes and bring anything that could come in handy for a runway look. Contestants are given a list of numerous runway categories to prepare for, everything from the infamous “A Night of a Thousand Madonnas” to the monochromatic “White Party Realness.”

That presented a problem. Before deciding what to wear, he’d have to decide his hometown.

The Steinbergs moved frequently, following Mark’s rise in academia. Sasha was born in the Bay Area, before moving to New Haven, Connecticut, while Mark taught at Yale.

In the British dive bar, Mark advocated for Berkeley, California, where Sasha was born. Sasha rejected it.

Instead, he opted for New York where he currently lives with John Jacob. It’s where his drag is best known.

Now came the next big decision: what to wear. Almost immediately, Mark interjected.

“Well the obvious thing is the Statue of Liberty,” he said.

Sasha rejected it. His hometown didn’t really matter. He’s an avant garde, intellectual drag queen. It mattered that he was on brand, an increasingly important factor to determining who’s successful after “RuPaul’s Drag Race.”

He designed a look representing Brooklyn’s art scene with references to Andy Warhol and Jean-Michel Basquiat.

The three other queens from New York wore various State of Liberty looks — some better than others.

“Right away, it was a gesture of saying, ‘I’m going to be different,'” Mark said of Sasha’s look.

Sasha’s artist route smartly stood out, placing in the top three the first week. But don’t call Sasha an artist.

“I like ‘drag queen’ because that is a type of art,” he said. “I’ve really been really stubborn on not calling myself an artist.”

Then there’s Sasha’s hair, or lack thereof. He’s a self-identified bald queen. It’s another part of his brand.

It’s an honor of his mother, Jane Hedges, who was diagnosed with cancer a few years ago. Sasha shaved his head in solidarity. He’s stuck with it ever since.

During his mother’s illness, Sasha frequently returned to Urbana. Hedges passed away in 2015.

When home, Sasha often performed at Chester Street Bar in downtown Champaign. It served as a homecoming of sorts for a queer man at the haven of gay culture in Champaign-Urbana.

Mark was never allowed to go — it was just Sasha’s thing.

“C-Street in Champaign was always this gay paradise to me,” Sasha said. “My whole time in high school I couldn’t get in. When I went to college, I came back with a fake ID and snuck in.”

But it wasn’t always easy growing up queer in Central Illinois. Aside from Chester Street, he didn’t see a ton of queer culture in Champaign-Urbana.

“The ruralness of it did give me a drive to go out and be apart of changing the world,” he said. “That was my dream at the time.”

However, the small-town mindset wasn’t entirely isolating. Sasha wouldn’t let it be. His brand of activism stepped in before it even had a name.

Sasha experienced early queer culture by gathering with other gay high school students at their homes.

“Whatever the town had was what I was going to be able to access,” he said. “That’s always an option, and sometimes it’s even a better option, more fulfilling option, to be able to start your hangout spaces and to build your own community.”

He’s kept this mindset throughout his successful drag career. While on tour traveling to new cities, Sasha makes sure to introduce himself to the local drag performers. He shows them respect.

“When you grow up in a town that really is a community, you learn how invaluable that is,” he said.

Sasha hasn’t been in drag in Champaign-Urbana since 2015 when he and John Jacob launched their “little punk-stapled zine,” VYM, at the former Figure One in downtown Champaign.

“I wanted to be part of creating other ways of representing drag culture, showcasing other sides of drag culture that talked about drag kings and bio queens,” Sasha said.

Sasha is proud to be on “Drag Race.” While he’s not the first bald queen, art queen or New York queen, he’s found a niche.

“We shouldn’t hold it to the standard of needing to represent all of drag,” Sasha said. “It’s done a really good job of introducing people to new styles of drag, even if it just gives the littlest taste.”

Sasha attributes much of his international identity to his parents.

In 1992, Mark spent time in Russia researching for a forthcoming book. He talked with Sasha and his wife on the phone once a week while sitting in his little Moscow hotel.

From then on, Sasha and his mother routinely vacationed in Russia. They spent six months in the country during Sasha’s summer before beginning at Vassar College.

Sasha came out while living in Urbana. So when traveling, Mark said Sasha began searching for gay communities abroad, seeing the LGBT community as international.

“A lot drag performers are very American focused and don’t realize there’s a whole international world out there and a very old one,” Mark said.

After college graduation, Sasha spent a year in Moscow on a Fulbright Scholarship. Like his father, he went to study radical political art, specifically the revolutionary aspect of drag. It’s another part of his brand.

“It’s been really interesting continuing talking to my dad about how queer movements, queer art and queer nightlife could really be the forefront of some serious resistance,” Sasha said.

And like any good drag queen, Sasha is active on social media. He uses it to connect with queer Russians, offering support when possible.

“Seeing the actual atrocities that queer people experience around the world is a good reminder of what we have and to appreciate it,” Sasha said. “And to not let ourselves move backwards at all.”

With Sasha’s recent success, Mark doesn’t see his son as frequently.  So when Sasha hosted a “Drag Race” viewing party at Roscoe’s Tavern in Chicago on May 12, Mark drove up.

He’s watching the show like any other viewer, unaware of who wins. Mark doesn’t know when Sasha will leave, or if he even will.

Mark sees Sasha’s personality translate on screen, specifically his frustration when not performing well. After all, he just another doting father in awe of his son’s life.

“He living a politically and culturally expressive life,” Mark said. “In Trump’s America, you frankly couldn’t be doing anything more important.”

A previous version of this article misspelled “Stratford-upon-Avon.” The Daily Illini regrets the error.