I-Guides make their mark on campus with move-in 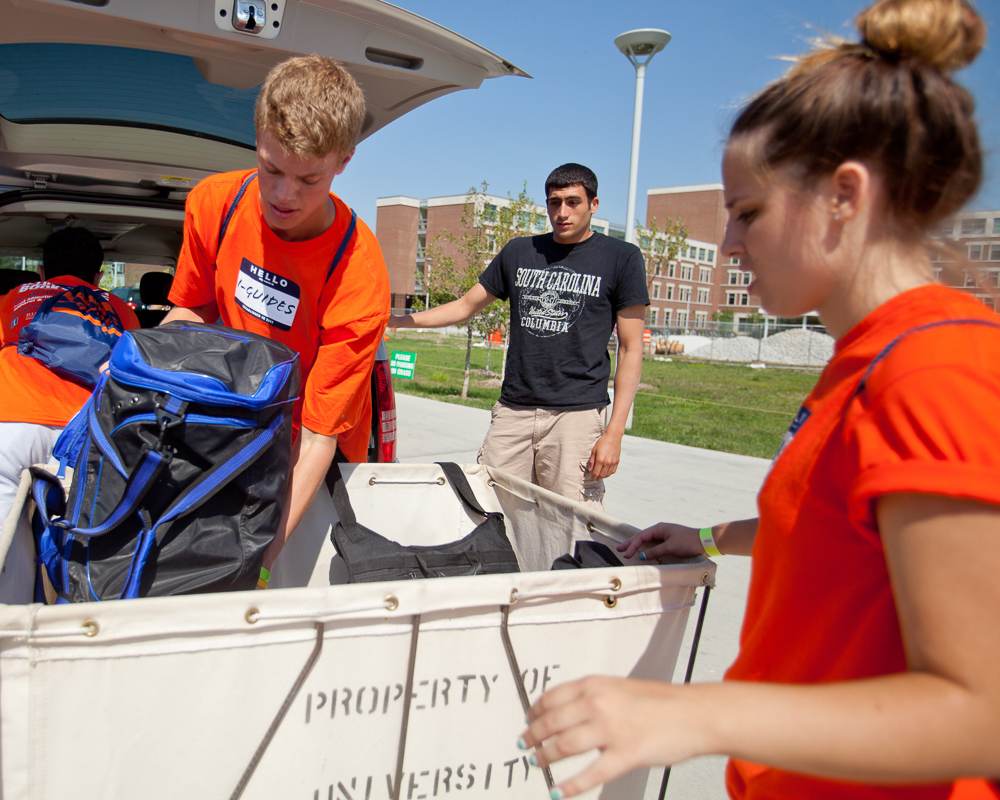 I-Guide Trent Houdek, sophomore in Business, loads a duffle bag out the van of a freshman moving into Hopkins Hall on Move In Day Thursday, Aug. 23, 2012.

Move-in day can be long, frustrating, stressful and a little bittersweet as summer comes to an end. Especially for students new to the University, the traffic and crowded campus can be quite overwhelming.

To make the day more bearable for everyone, some University students volunteer their time as I-Guides. The tradition of students serving as I-Guides and assisting with move-in began in 1947, making it one of the longest lasting student-run organizations on campus.

I-Guides do a variety of jobs during move-in, including greeting students and parents, unloading vehicles, directing traffic and making new students feel comfortable on their first day of college.

Jonathan Nguyen, junior in Engineering, was an I-Guide last year and is returning as an I-Guide this year. Nguyen said one of his favorite parts of the job is the influence that comes with it.

Because of a good move-in experience his freshman year, Nguyen was inspired to help others have a good experience as well.

“What I really liked about being an I-Guide is helping people out. Giving incoming first students a really good impression of University,” Nguyen said. “When I moved in my freshman year, my I-Guides were very friendly and helpful, so I just wanted to do the same for other people.”

Being an I-Guide is not only a good opportunity to volunteer and gain leadership experience, but also a way to earn other benefits.

I-Guides move in a day early and avoid all traffic and crowds during general move in. They also receive free meals for their first few days on campus.

Josh Gitogo, sophomore in Business, has been an I-Guide for the past two years. Gitogo volunteered at Snyder Hall last year, which was also where he lived. He said helping students out on move-in day allowed him to make friends with the people he lived with.

“Immediately I was able to recognize a bunch of faces those first couple weeks. I made some friends through the I-Guides we were working with,” Gitogo said. “It was just really cool helping people move in, and then living with them for the whole year, so it’s a good way to meet new people.”

Jessica Whitfield, sophomore in LAS, was also an I-Guide last year. She also said one of the best parts about being an I-Guide was meeting so many people and being able to help them.

“I can remember specific people that I talked to that I moved in,” Whitfield said. “Everybody was different, everybody was interesting, it’s just really cool.”

Whitfield said she recommends the I-Guide program to anyone that can do it because it’s a unique and fun experience that comes with many perks and nearly no downsides.

In fact, Whitfield enjoyed being an I-Guide so much that she became a hall coordinator this year, which is a leadership position related to the I-Guide program.

“I was like, ‘Well, if I could help organize that or help in this process in any way I would love to do that,’” Whitfield said. “If I didn’t get this position I would have loved to volunteer just to be an I-Guide again.”

Students agree that the aspect of volunteering seems to make the I-Guide program so enjoyable. Whitfield believes that because students are choosing to give up their time, the atmosphere on move-in day is positive and rewarding.

“Everyone’s always really happy and really positive. Like last year it was so hot and everybody was sweating, but everybody was so happy,” Whitfield said.

The process to become an I-Guide is simple. Students can sign up online and can choose when they want to assist with move-in. The job is relatively simple, and anyone is eligible to sign up.

Gitogo said although anyone can be an I-Guide, people who are extroverted and enjoy talking to other people tend to make the best guides.

Gitogo also said one thing people can forget is that the students are only volunteers and do not receive any compensation for being I-Guides.  While move-in day can be stressful, I-Guides do their best to help make the students’ and parents’ day as easy as possible.

“Sometimes people might ask you a question and you don’t know,” Gitogo said. “Then they kind of get grumpy because they see you in the shirt and they think it’s super official, but we’re all just students helping people move in. We don’t always know everything.”