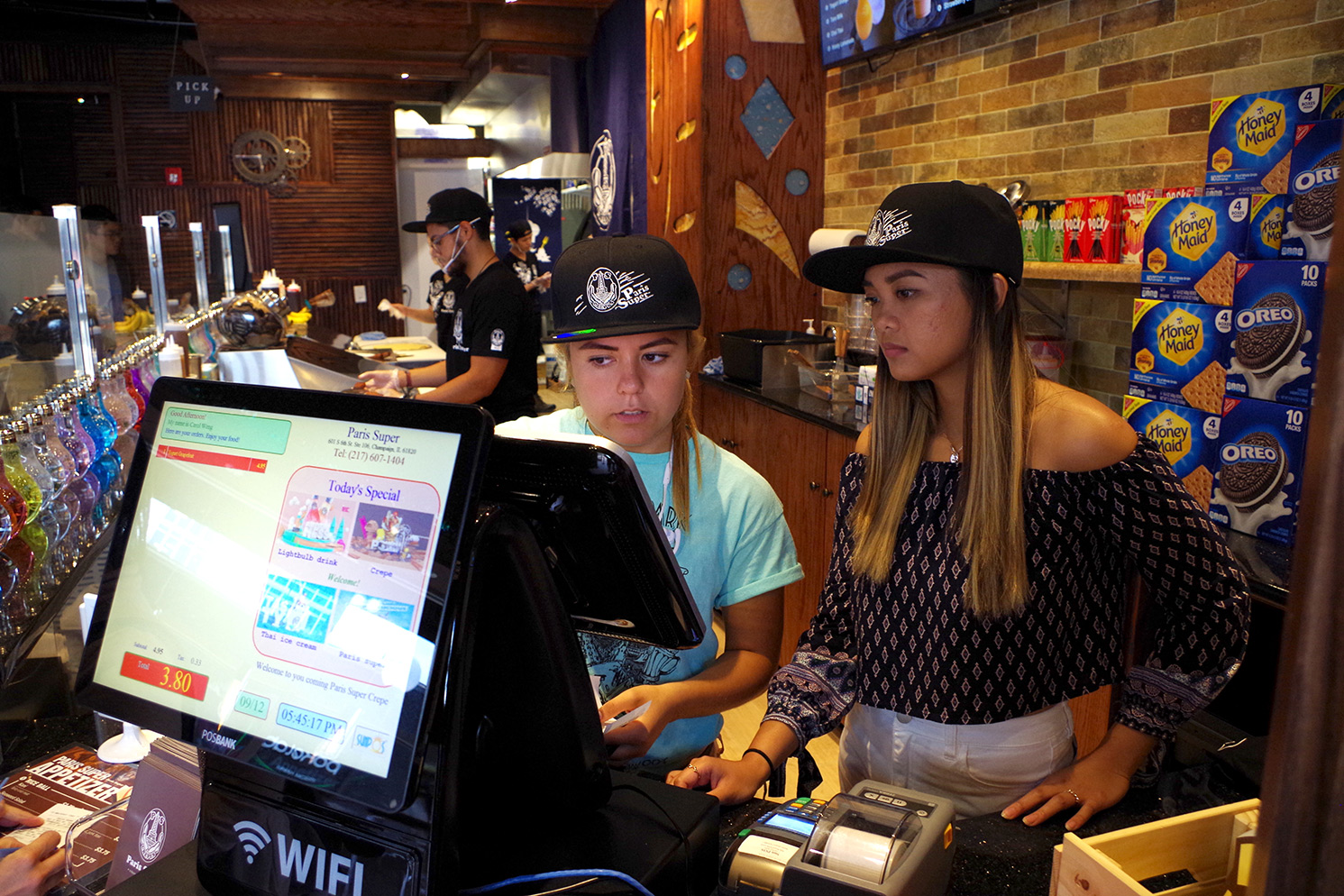 Mary Kaylle Idor (left) and Anahi Diaz (right) work at the counter of Super Paris Crepe. The shop is located at 601 S. Sixth St. in Champaign.

With the closing of 8ºF Ice Cream & Crepe, another option is opening up for all crepe and rolled ice cream fans. Paris Super Crepe has a similar style and just opened Monday at 601 S. Sixth St. in Champaign.

The Paris Super Crepe menu has a variety of options. There is an assortment of crepes, the most popular being the signature crepe with mangoes, strawberries, custard cream, whipped yogurt, almond, chocolate syrup, pocky sticks, chocolate pearls and vanilla ice cream. They have several flavors of Asian-style ice cream served in rolls rather than scoops. There are also appetizers and drinks on the menu.

Carol Wug, owner of Paris Super Crepe, moved to the U.S. from China back in 2009 with her family. In 2015, she opened her first shop called Ice Max in Philadelphia, which serves Thai ice cream. She later opened another store in Chicago where she introduced the specialty crepes.

Now, Wug has a new restaurant on campus with the same type of food. She said the University will bring in a good crowd.

“I know that there are a lot of young people here because there is the University here,” Wug said. “It is most popular in young people.”

According to a Forbes article about Thai rolled ice cream, the process to make the dessert takes roughly two minutes. The chef pours a cup of a flavored milk-based liquid on a chilled metal circle. The base of the ice cream freezes, the chef kneads it with paddles and shapes it into a circle. Finally, with a spatula, the chef converts strips of the ice cream into rolls.

Enson Chen recently began working as the manager of Paris Super Crepe. He lived in New York for 12 years and moved to Champaign about six months ago.

Chen is especially excited about the shop opening because it allows him to talk to many customers and students. He also said that students should try out the food because it is so different than other restaurants in the area. He said the crepes are not like the traditional French crepes people are used to; they are crispier.

However, Chen’s personal favorite item is the popcorn chicken, which is one of the appetizers.

University students James Parsons and Eben Arnold tried the new restaurant on opening day. It was Parsons’ first time ever having a crepe.

“I work two stores down, and I’m actually not excited because I feel like it’s gonna bend my wallet a little bit because I’m going to get after-shift snacks,” Parsons said.

However, Parsons said he is excited about Paris Super Crepe opening because of the lack of dessert places on campus. He said this new shop will bring a nice “dessert nook” to town.

Arnold, who ordered the signature crepe, agreed with Parsons about the new shop. He said he was looking forward to trying out 8F Ice Cream & Crepe, but recently discovered it had closed.

“A couple weeks ago I thought there was a crepe place and it turned out to be closed,” Arnold said. “Now I’m excited that there actually is one.”