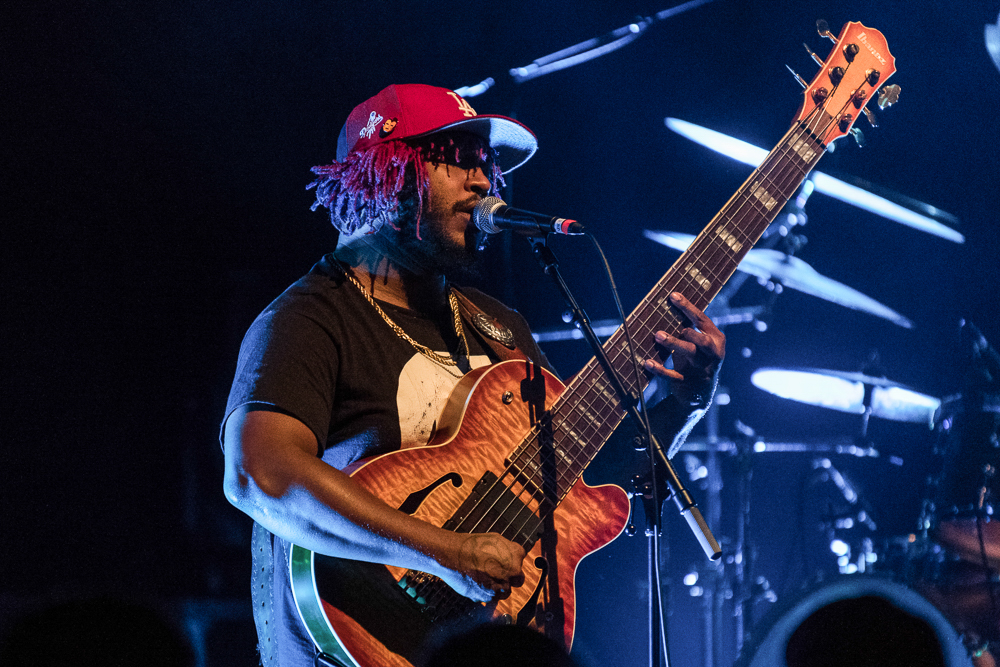 Thunder cat performed at the 2017 Pygmalion Festival on Thursday, Sept. 21. The festival featured a wide variety of genres and performers.

The Pygmalion Festival had its 12th run this year, boasting one of its most diverse and select lineups yet. While the SXSW-like event does a great job of combining food, clothes, technology and literature — there was a “human library” Thursday, from which you could “check out” a person to read you a story — the festival’s forefront talent is its music.

From the heavenly melancholic styles of Big Thief to the organized chaos of Animal Collective, chances are this year had a sound for you. Here are some of the most notable shows we caught in C-U this weekend.

The Brooklyn indie band is selective with its expression. Lead singer Adrianne Lenker is keen to keep you floating with her voice, only to take you back to reality with a harsh wall of sound from the band.

The song, “Paul,” is a perfect example of this formula. Lenker’s genuineness was a real standout of their set, engaging in some awkward stage banter you couldn’t not enjoy.

Thundercat, real name Stephen Brener, is best known as an insanely talented bassist. After his Pygmalion performance, it’s probably best to just label him a hypnotist. Sometimes he and his band would all go into a hodgepodge of improvisation for 10 minutes, leaving the crowd to get completely lost in their sounds.

The band would return to structure. Brener would start singing and you would return from the hypnotizing grip of music. It’s hard to give Thundercat a genre, as the band defies jazz standards, but is too sporadic to be labeled “funk.”

But it doesn’t matter, Brener and his band — the drummer was out of this world — are some of the best musicians within this decade, and that was easily proved by their performance.

Similar to Thundercat, there’s no easy box to put the Canadian ensemble, but even if we did their energy would probably just break them out of it. They kept things very jazzy, groovy and surprisingly high-energy. They’d break it down often, much to the delight of an equally high-energy crowd.

Drummer Alexander Sowinski kept the engine running, pulsing the four-piece throughout a set of songs from their own albums, “III” and “IV,” as well as running through some collaborations.

One of their biggest surprises was their playing of the effortlessly funky “Fall in Love.” Complete with a 1970s flute run by Leland Whitty, it was the perfect dance break the crowd didn’t even know it needed.

The band gets bonus points for also opening up with a rendition of The Champs “Tequila,” that’s just smart playing to the audience.

Their second time performing at Pygmalion, rapper CJ Run showed why they’re one of the most talented local artists around. It was their first time performing with a live band, and CJ kept the late-night Thursday crowd engaged while they spit bar after bar.

Whether it was a track from their EP “ForgetMeNot” or a rundown of new songs, CJ definitely brought a great calculated energy and passion. The sky’s the limit for the insanely talented rapper, don’t sleep.

Smino is one of the best midwestern rap artists right now. I knew that going in, I left still knowing that. The acrobatic flows, the silky smooth singing, the extremely bouncy and next-level production, Smino has quite the arsenal.

Coming on around 1 a.m. on Friday, Smino definitely kept the late-night crowd pleased. From his hits “Anita” and “Netflix and Dusse,” to probably his breakout song “Colors,” the crowd that was there knew Smino, going word-for-word with some of his more catchier hooks. The only downside was his set left more to be desired, only going for about 40 minutes.

Smino did try to compensate though, reaching into his “Backwoods” labeled shoulder bag to throw out packs of tobacco product into the crowd during his song “Wild Irish Roses.”

If you took a robot, dipped it in acid and told it to dance, you would probably be playing Animal Collective’s music to accompany that. The top headliner of the festival, this was the experimental pop band’s first time performing in Champaign, and man did they put on a performance.

Their show started gutsy, playing some of their most experimental songs like “Hounds of Bairro” and “Hocus Pocus.” Loops and loops of samples and sounds would layer, giving a true sense of organized chaos. Sometimes you’d hear noises from them, and just wonder how on Earth it’s possible to make.

On stage, their three Stonehenge-reminiscent sculptures lit up in the background to the pulse of each synth, as their projected visuals on top of that would match the sporadic nature of their sound.

Still taking some time to process what they did, the top headliners of the festival surely did not disappoint, keeping some of their hardcore fans constantly bobbing, grooving and dancing.

As the crowd left from Animal Collective outside, they’d probably catch the bluegrass sounds of The Lil’ Smokies on the free street stage.

I don’t know if it’s the break from Animal Collective’s chaos that had me so engaged by them, but the acoustic quintet of banjos, steel guitars and others, was just what I needed to hear. These cats from Montana shredded at an extreme level, sounding like they could’ve been a total headliner at the Ellnora Guitar Festival last weekend.

But instead, they were playing at the free Pygmalion street stage. For that, Lil’ Smokies, we thank you.