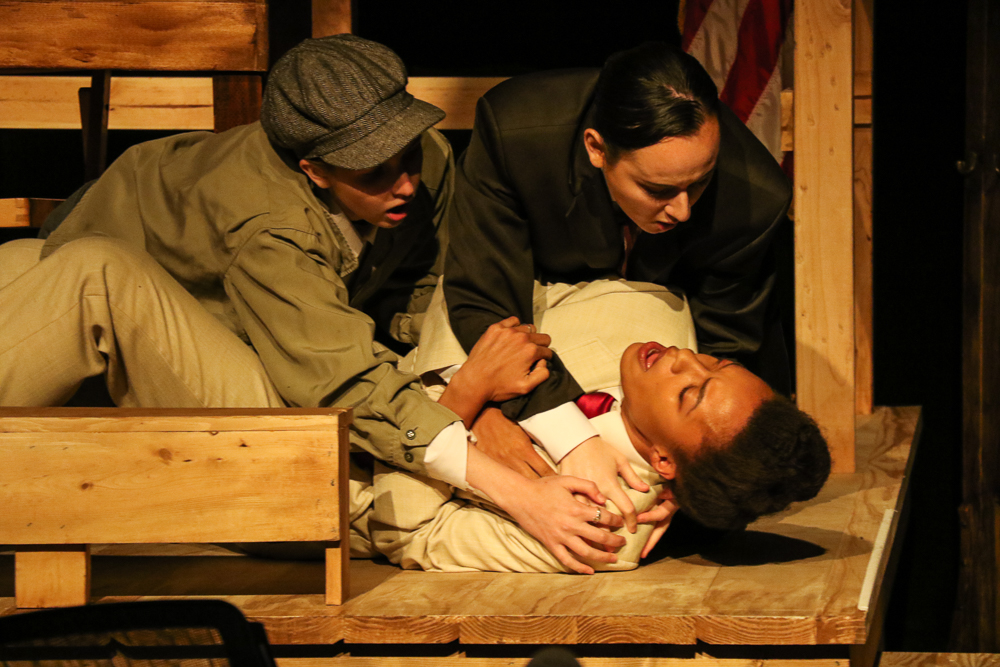 Female actors perform “All the King’s Men” at Krannert Center for the Performing Arts. The play runs until Oct. 8.

Audience members walk into a dimly lit room with round tables surrounded by chairs at the Studio Theatre in the Krannert Center for the Performing Arts. A banner hangs from the ceiling, shining in the glow of the spotlights, “Willie Stark for Governor, a Sure Winner” the banner reads.

The portrait of Willie Stark depicted on the banner is a woman. Hushed speakeasy music begins to play, and the audience is catapulted to 1930s America, in an unspecified state in the deep south.

The University production of “All the King’s Men” opened Thursday at 7:30 p.m. and will run through Oct. 8.

“The club style seating really added to the 1930s theme,” said Mason Bushell, student in Engineering, who attended the performance on opening night.

Bushell said the setting, costumes and fake accents helped pull the audience into the 1930s.

“All the King’s Men,” written by Robert Penn Warren, is based on the true story of the rise and fall of Louisiana governor, Huey Long, renamed Willie “The Boss” Stark in the play.

Long was “a populist demagog,” who rose to power by promising people he would ‘make every man a king,’” Tom Mitchell, play director and associate head of the University’s theater department, said.

Mitchell, after the election last November, said he felt sad for women who had really “pinned their hopes on the possibility of a female president, because we haven’t had that, and we still don’t have very many women in the highest levels of leadership in the country.”

For these reasons, Mitchell decided to cast a female actress for every role in this production, despite the fact that there are only three female characters in the play.

“Nobody is really ideally cast in their roles because they don’t share the experience of the characters as written, so they’re all depending on a leap of imagination,” Mitchell said.

Esther Fishbein, senior in FAA, plays the role of “Man” in the production. Fishbein said she loves sharing the stage with her female counterparts; however, for her, it has been challenging trying to accurately portray the power that male actors had in previous roles in “All the King’s Men.”

Fishbein observed that her fellow actresses have had an increased confidence about themselves while developing their characters throughout the month-long rehearsal process. She said she feels the same way.

Fishbein said there is “a very different energy than any other rehearsal process (she) had ever been in,” while working with an all-female cast.

“The overall line deliveries and the way the actors portrayed their characters was very emotional and moving for audience members,” Bushell said.

He also said the entirely female cast was a statement on corrupt, male-run politics in the 1930s, and that it connects to today’s feminist movement.

As Mitchell saw this production come together, he said he was surprised by the fact that, as he watched the play during rehearsals he found himself unaware of gender completely.

“I’m just seeing people, and gender seemed sort of beside the point, that speaks to the good work that the actors are doing,” Mitchell said.

Bushell said after watching “All the King’s Men” he realized that politicians actions are based on how the public views them, and what the public wants.

“It adds a sense of powerlessness to politics in general,” Bushell said.

Throughout directing this show, Mitchell found the overall message of “All the King’s Men.”

“The motivations in politics can be complex, and that there are not simple solutions or simple explanations,” Mitchell said. “Sometimes we (as people) grab for easy answers and find out that they are not as easy as we think.”