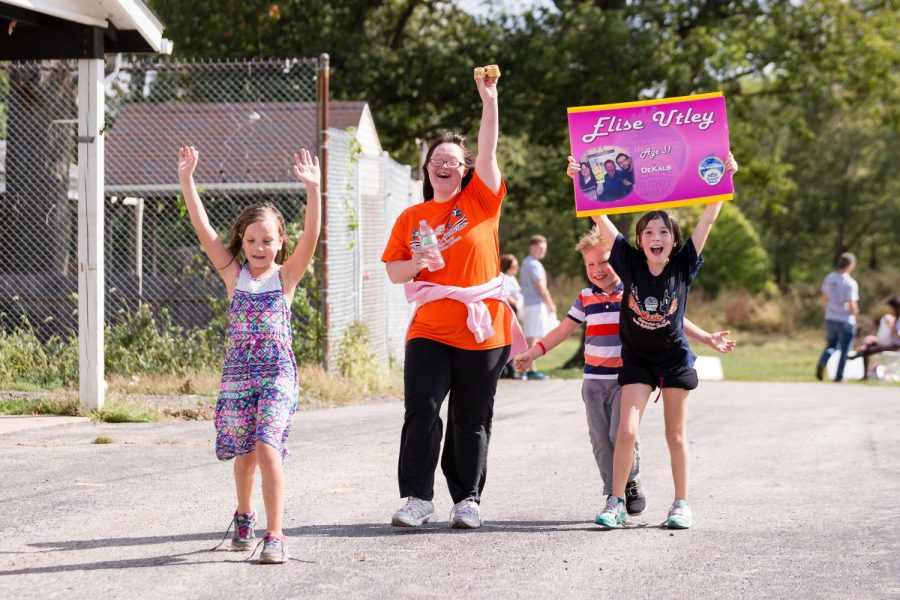 Elise Utley (orange) and her friends participate in the National Down Syndrome Society Buddy Walk at the Champaign County Fair Grounds on Saturday, October 7.

Ask an Illini athlete if they know Tiffany Hand, and they’ll most likely say yes.

“She’s a huge Illini fan, no matter what sport it is,” said her father, Bill Hand. “And all the athletes, they take great care of her.”

Tiffany is a Champaign local with Down syndrome, a disease that affects almost 6,000 babies each year in the United States. Down syndrome occurs when a person is born with an extra copy of the chromosome 21 and changes the way people develop.

While the Champaign County Down Syndrome Network hosts several events, the Buddy Walk is its biggest fundraiser all year. It also aims to support other families with Down syndrome and encourage participation within the community.

The event offers music and games, and sells food from local vendors like Jet’s Pizza. Each child got the opportunity to be introduced by their parents on stage before the walk began. The Marching Illini even performed, and also led the one-mile walk around the park.

Mark Scott, president of the organization, has a 15-year-old daughter with Down syndrome. He said the event is a great way to raise awareness and funds, and get the community involved.

“People with Down syndrome … they’re just like anyone else, and they deserve respect and admiration,” Scott said. “They can do pretty much everything they set their mind to.”

At the walk, people can join “teams” where they can support a particular child with Down syndrome. Bill was the leader of his daughter’s team, Team Tiffany.

Bill was on the board when the event first started and has been a big part of it ever since. He said the event is a great way to spread awareness, and the whole C-U community is very supportive.

Bill said Tiffany being born with Down syndrome is the best thing that ever happened to him.

“Of course I played baseball, so I was always about winning,” Bill said. “When she was born with Down syndrome, I’m thinking, ‘She’ll never play ball.’ Well, she plays baseball now. She wins hearts of people.”

Allie Bauch, alumna of the University, played for the University softball team. She became friends with Tiffany through her years of playing softball and came all the way from Schaumburg, Illinois, to join Team Tiffany.

“It brings everyone together and shows how inspiring these kids are,” Bauch said. “They mean so much to so many people. I think it’s awesome that there’s positivity with it instead of negativity.”

The Buddy Walk brought a lot of positivity and awareness to the cause and received great support for the entire C-U community.

“These kids can succeed in life. They can be very normal, just like everybody else,” Bill said.