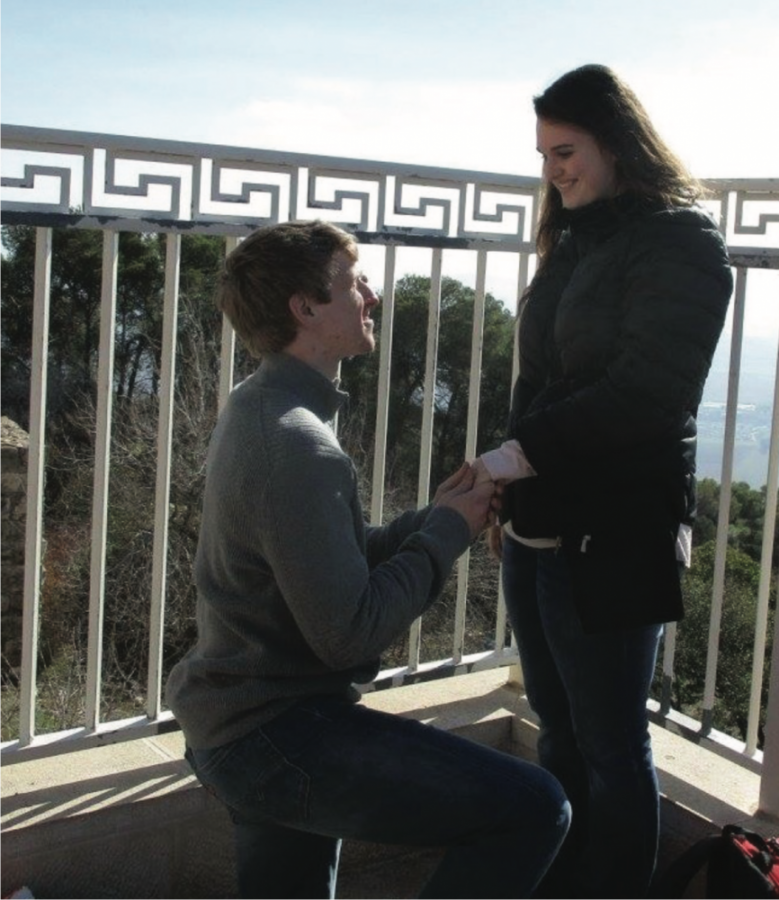 While most students are juggling studying, participating in student organizations and working jobs, a small portion of students on campus can add planning a wedding to their list of priorities.

Kayla King and Jacob McCombie met during their freshman year at the University in office hours for their PHYS 100 class.  Four years later, they are engaged to be married.

The couple became engaged about a month ago and have already begun planning the wedding for the summer of 2018.

They realized they were ready to be engaged this past summer when they were on a date and ended up next to Jared: The Galleria of Jewelry.

“We both saw it, looked at each other, and decided to go in,” McCombie wrote in an email.

For couples that are engaged in school, they often have slightly different obstacles to face than engaged couples out of school. King, senior in Engineering, wrote about how spending time with McCombie, senior in LAS, requires a lot of planning because of their busy schedules.

“Being in college requires us to be strategic with planning our time together,” King wrote. “We both have heavy class loads, and Jake is an RA, so we have to be intentional about spending time doing things we enjoy.”

McCrombie wrote despite it being a bit difficult to juggle school, spending time together and wedding planning, the couple has grown even closer since becoming engaged.

Similar to McCombie and King, Brooke Haag, senior in ACES, has been dating her boyfriend, Tyler Shrewsbury, for almost five years since her senior year of high school. They have been engaged since December, and are planning a summer wedding.

Haag said for her and her fiancé, it makes the most sense for them to get married right out of school. She believes that because they have been together for so long and they know they want to spend their lives together, getting married right away is a good option.

“We’ve just been together for so long, and I guess when I graduate, we didn’t want to start separate lives before then getting married,” Haag said. “We wanted to mesh our lives right then, rather than starting on our own and seeing where we went. We just honestly want to spend our lives together.”

For Haag and Shrewsbury, they have an extra challenge to face that most engaged couples out of school do not.

The couple has been together long distance for almost their entire relationship.  They did not attend the same high school or college, but they have learned how to make the most of their time together.

Haag said a general rule they follow is they never go more than two weeks without seeing each other, and they try to talk on the phone every night. However, Haag said while trying to plan a wedding, this schedule is not the most convenient.

“The main thing is that nowadays most engaged couples are living together, so trying to do all the wedding planning is a lot easier for those couples,” Haag said. “Just as far as planning times to go visit venues or try on clothes, things like that are a lot easier when you live together.”

Haag also said she knows that sometimes people view engaged college students in a different light than other engaged couples, but she has received support from her friends and family. Especially since they have been dating for such a long time, everyone has been happy for the couple.

“Some of my friends were kind of surprised just as far as like ‘don’t you want to do more exciting things before you get married or get tied down?'” Haag said. “My response to them is if I’m going to have adventures and do exciting things, I want to do them with Tyler.”

Haag said she can get stressed when dealing with school and planning for the wedding, but that one of her favorite things about Shrewsbury is his ability to make her smile.

“He always knows how to make me smile,” Haag said. “I kind of take life too seriously sometimes, so he always kind of reins me back in and makes me realize that things are better than they may seem.”