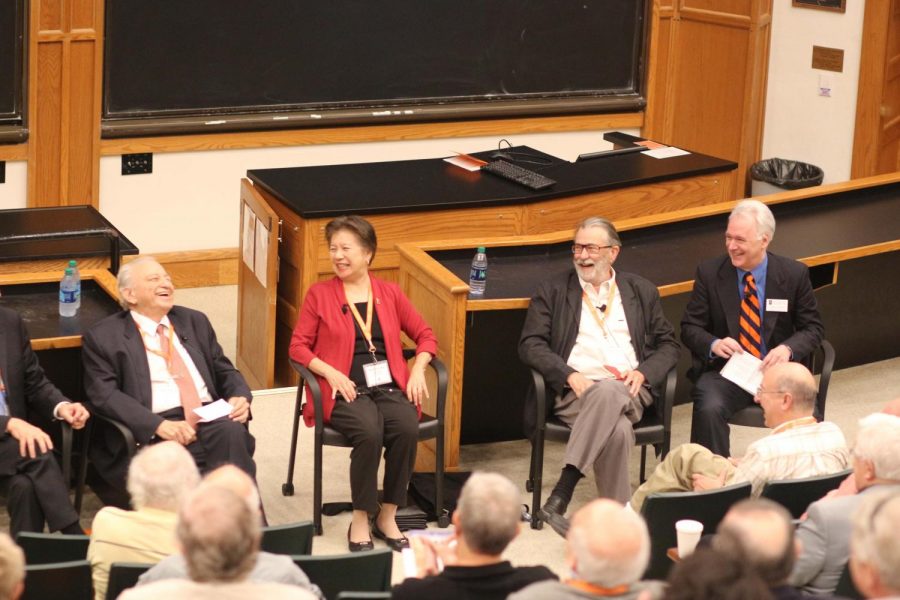 After nearly two years of planning, the School of Chemical Sciences — which currently houses the chemistry and chemical and biomolecular engineering departments — celebrated its sesquicentennial Friday and Saturday.

The event kicked off with over 100 alumni gathered in the newly renovated Chemistry Annex to celebrate its rededication, immediately followed by a ribbon-cutting ceremony. In attendance were University Chancellor Robert Jones and Dean of LAS Feng Sheng Hu, as well as several representatives from the Dow Chemical Company.

“The Dow Chemical Company provided a large gift to help us with costs for building renovations, so we’re dedicating the main lecture hall in the Chemistry Annex to them,” said Gregory Girolami, former head of the chemistry department and chair of the sesquicentennial planning committee.

Dedication Day also featured the unveiling of a plaque honoring the University’s Herb Gutowsky Citation for a Chemical Breakthrough, presented by Peter Dorhout, current president-elect of the American Chemical Society.

“The ACS is currently the world’s largest scientific society, so it’s great to get the current president-elect of such a society to show up to this event,” said Martin Gruebele, head of the Department of Chemistry.

According to the School of Chemical Sciences, the University is no stranger to excellence in chemistry, as 25 ACS presidents and 11 Nobel laureates have been University alumni or faculty.

“We became a department that was interested in developing leaders for the chemical industry. Nearly every major chemical company has had an Illini chemist at their head at some point or another,” Girolami said.

The night ended with an after-dinner keynote speech from Theodore Gray, University alumnus, co-founder of Wolfram Research and author of the best-selling popular science book “The Elements.”

The second day of festivities, titled Reunion Day, focused on alumni, reminding them how far the School of Chemical Sciences has come over 150 years and hinting at possibilities for its next ventures.

“We wanted to maintain ties with our alumni, and this celebration was a great opportunity to have alumni come back to campus because there were a number of events that allowed them to participate in the history as well as the future of the departments,” Girolami said.

Senior faculty members gave several presentations, sharing their excitement over the history of the School of Chemical Sciences and its long-standing engagement of promoting the University’s tradition of excellence in research.

Girolami moderated the discussion for the History of Chemistry faculty panel, and later passed out samples of his School of Chemical Sciences history book, which is still a work in progress.

“We wanted people there who had a long, deep knowledge of the School of Chemical Sciences. That meant people who were here as far back as we could get them,” Girolami said. “We also wanted to have people who represented the diversity of the departments in terms of the different sub-fields.”

Reunion Day ended with tours of the School of Chemical Sciences to showcase new improvements of the facilities as well as the places that have remained the same over the years.

Mary Jo Hettinger, communication specialist for the Department of Chemistry, thought it was great to have former students and faculty come back and see all the progress they’ve had the opportunity to make over the years.

“It’s exciting for them and for us to be able to celebrate the event together. I think it’s got a big impact on the department,” Hettinger said.

University alumni have built up the reputations of the chemistry and chemical and biological engineering departments. The School of Chemical Sciences hosted this event to show them how their roles in the community can make a difference to the futures of both departments.

Gruebele said it’s important to have ties to the past, which are their alumni, and the future generations of leaders that make up their students. He also said it’s that bridge from the past to the future which makes it feel like one large family.

The School of Chemical Sciences feels it’s done its best to establish those deep connections between students and faculty, especially by focusing on research. Girolami said they always have students who, when they leave, feel they didn’t realize how spoiled they were by what was available at Illinois.

Although the sesquicentennial centered its events around alumni, the faculty and staff also came away touched by the celebrations.

“It’s great to take time from our busy schedules to celebrate the rich history we have here. I think this is a great time to stop and reflect because, in our busy everyday lives, I don’t think we do that enough,” Hettinger said. “I’ve been a scrapbooker for a long time, so putting together all the pictures from the event really excites me.”

Gruebele shares the same sentiments. He said every once in a while there’s an event that makes him step back and reflect on all the success the department has had over the years.

“This is really a good place, and having all these people, like Nobel Prize winners like Rudy Marcus, to come back and celebrate with us is really a good reminder of how good we really have it here,” Gruebele said.

Years of planning the celebration also helped bring the two departments even closer together, knowing their histories have already long been intertwined.

“I feel proud to have been able to work in such a great department with the (School of Chemical Sciences) over the years,” Hettinger said. “I’ve made lifelong friendships with the people I’ve worked with here.”