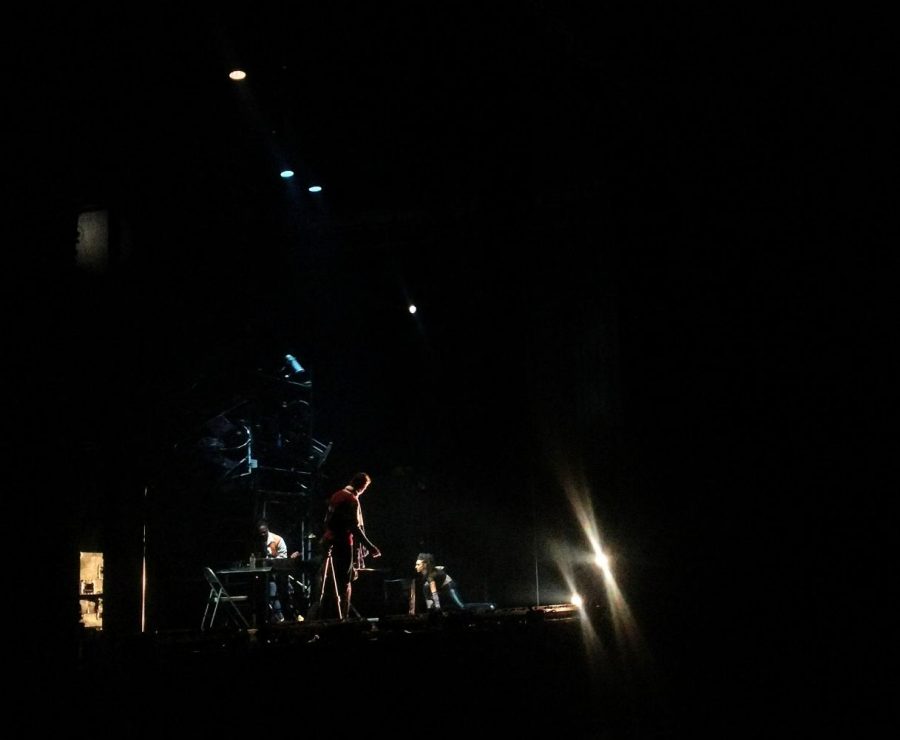 Sammy Ferber, playing Mark Cohen in “Rent,” performs during the show’s opening scene, accompanied by a member of the ensemble.

Twenty years after revolutionizing Broadway, Jonathan Larson’s “Rent” visited the State Farm Center. The musical filled the stage with passion as members of the show shared the story of impoverished New Yorkers searching for a silver lining, attempting to find community and purpose in a city trying to leave them behind.

The musical took place Tuesday at 7:30 p.m. and is part of a Broadway series at the State Farm Center. The other musicals include “Dirty Dancing,” “The Wizard of Oz” and “Cabaret.”

“Rent” opened on Broadway in 1996 and is both a Pulitzer Prize-winning and a Tony Award-winning musical. Larson never saw the outcome of his masterpiece, as he died shortly before it began its off-Broadway debut.

The show is a behemoth, handling complex issues with dramatic storylines and intricate music that layers and interweaves each problem together. Everything from the costumes to the setting prepared the audience for a show full of conflict, passion and love.

Mimi’s bright blue pants and Angel’s gaudy sparkling coat are juxtaposed by the dark and grungy background. Burning songs of revolution are followed by the soft music of a budding romance.

The fast-paced show barely gives the audience a chance to breathe after a scene depicting one character’s heartbreaking struggle with AIDS, before moving on to a raunchy dance number filled with moans and grinding.

It is an overwhelming experience, but one that captivates the audience for every minute.

Mary Lou Bedient, lecturer in Social Work, believes “Rent” is still popular because what the show portrays rings true in this day and age.

The show does not hide the ugly truth of living in a city, trying to survive. Kathleen Caboor, freshman in Engineering, said the show allows people to feel like they can talk about the hard truth of being a young adult.

“Rent” proves to be very topical, depicting struggles of disease, homelessness and addiction — issues that continue to plague peoples’ lives.

It stars a cast that embodies the anthem of diversity. The characters in the show are different genders, races and sexualities, and yet that is not its focal point.

“Rent” embraces individuality as one aspect of who these people are, but, as Kevin McCollum, an original producer for the show, said in a press release, “sexuality was a character trait, but it wasn’t what the show was about. It’s about young people finding their voice against all odds. It’s a celebration of diversity,” and that is where the heart of “Rent” lies.

As a celebration of artists and visionaries, “Rent” embraces the entirety of the human experience without appearing shameful or apologetic. Sexuality is explored explicitly and thoroughly on stage. Every character, in some way, delves deep into the struggle of living with AIDS, particularly in one poignant scene that depicts a character thrashing violently as the disease slowly takes his life.

The lives of the homeless, and the near homeless, in New York, are not taken lightly. They are depicted through the upsetting details, and they expose the constant struggle to exist in a life that attempts to bring them down.

With all the horror of death, disease and poverty surrounding them, the characters keep their spirits up in any way possible, recognizing the value of art, music and community.

The number “La Vie Boheme” was a love letter to the expression of individuality, distasteful as it may be to some.

It is a song of defiance of those who wish to constrain freedom of expression, and a song of acceptance for however one sees fit to express personality.

By the end of the show, the characters Roger, Mimi, Collins, Angel, Mark and Maureen are a group of misfits living as outsiders, but managed to find a family with each other.

“Rent” was written in a different time for a different audience, and yet it remains a constant source of inspiration for those living on the margins with fire and art in their hearts.