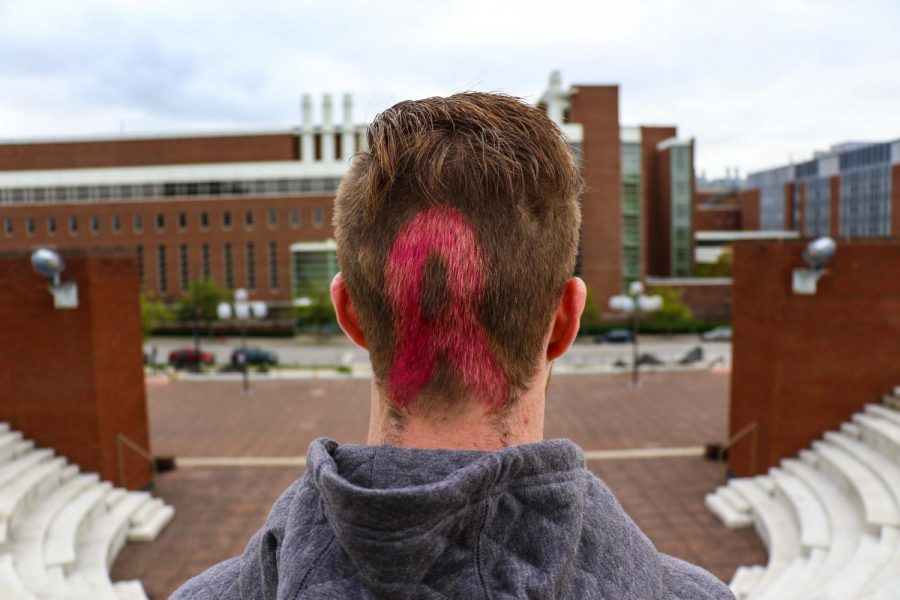 Kevin Troy, sophomore in FAA, has dyed his hair pink in the outline of the breast cancer ribbon every October, which is Breast Cancer Awareness Month, for several years. Troy’s mom was diagnosed with breast cancer when he was young, and she died a little over a year ago.

Kevin Troy, sophomore in FAA, was in third grade when his mother was diagnosed with breast cancer.

She spent years battling the hardest fight of her life. Troy was with her every step of the way.

She lost the battle a little over a year ago.

“It was just something that I grew up knowing ,” Troy said.

One in 8 women who live in the United States will be diagnosed with breast cancer during her lifetime, according to the Susan G. Komen Breast Cancer Foundation.

October is widely known as Breast Cancer Awareness Month. Because of this, the month carries great meaning for some students at the University.

Vitale, freshman in DGS, was 4 years old when her mother was initially diagnosed.

She said she is proud of her mom and her fight.

“She hopes to inspire women to be strong if they happen to have breast cancer,” Vitale said. “She also wants many to get involved to work towards finding a cure.”

Vitale’s mom helps others deal with breast cancer because she knows what they are going through.

“She embraces the scar on her chest as it reminds her of her bravery and she tells me she will never be embarrassed of it,” Vitale said. “Her positive outlook on her experience shows me that this disease can be overcome.”

“Her positive outlook on her experience shows me that this disease can be overcome.”

Vitale said it is important for students to take interest in Breast Cancer Awareness Month so they know the signs of breast cancer. That way, if students do find something unusual, it can be treated in the early stages.

She also said students can learn how to fundraise for an important cause and to show sympathy toward families of those with breast cancer.

Troy said his mother’s death is what “shifted the perspective” he had about the disease.

Her passing is what made him realize that breast cancer is still an extremely dangerous condition.

He said his mom never made her cancer that big of a deal and that he barely remembers her taking off work.

Troy has dyed the back of his hair pink in the outline of the breast cancer ribbon every October for several years to raise awareness.

This November, Troy is participating in a three-day walk in San Diego through the Susan G. Komen Foundation.

He said one of the things he and his mom always talked about was doing the walk.

“It was something that I never got to do with my mom,” Troy said.

His mother passed away before Troy met the age requirement to participate. This encouraged him to take the leap and participate on his own.

Troy said he has raised $3,000 so far, and his group has raised just under $5,000. He is continuing to fundraise through Facebook.

Although Vitale’s mother is no longer battling cancer, she still makes efforts to support those who are and those working toward finding a cure.

Her family holds an annual garage sale and the money raised is donated to the Susan G. Komen Foundation. Vitale also participates in the Making Strides Against Breast Cancer Walk and the Relay for Life.

Domingo Casanova, junior in Media and Illini Media Company employee, said his mother was diagnosed with breast cancer in 2009.

Casanova said more should be done around campus to call attention to the significance of October. He suggested wrapping pink ribbons around trees as a symbol to acknowledge the month.

Vitale has positive memories of her mother’s battle with breast cancer. She said her community did a wonderful and meaningful job in supporting her mom.

“The teachers of our elementary school volunteered to trade off making my siblings and I lunches,” Vitale said.

Vitale said it was humbling to see the community offer support for her entire family.

“Knowing so many people care about a victim of breast cancer and their family is moving to me,” she said. “I hope everyone can experience the joy of beneficially impacting others in the way I did.”