The Marching Illini: A beat of positivity on and off the field 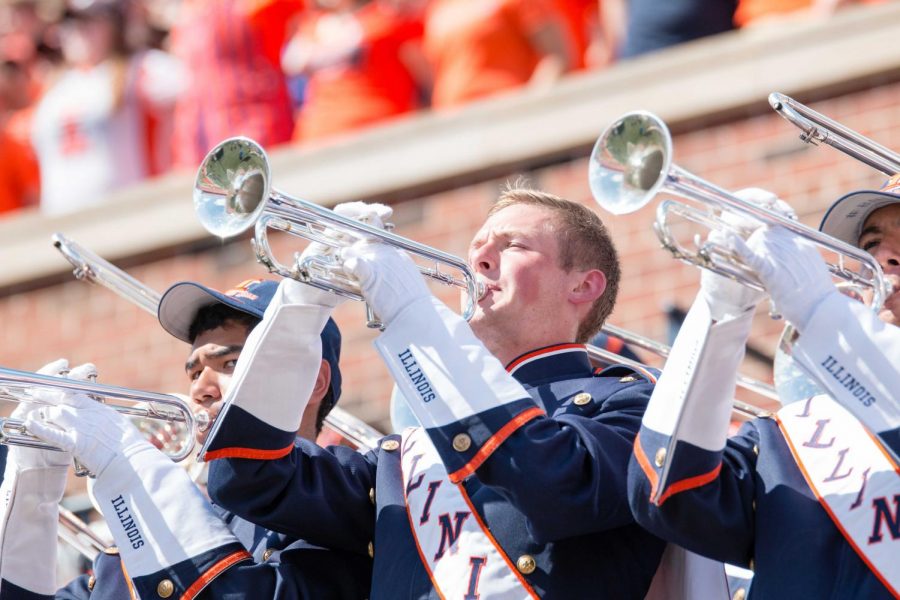 A trumpet player in the Marching Illini plays a song between downs during the game against Murray State at Memorial Stadium.

Barry Houser, director of the Marching Illini, was sitting in an empty seat of Memorial Stadium on the eve of the Illinois Marching Band Championships, an annual event where 42 high school marching bands from across the state come to compete in a day-long competition hosted by the band.

Below him were the 350+ members of the Marching Illini — the band, the Illinettes and the color guard — performing their now well-known “Pirates of the Caribbean” set.

A single blow of Houser’s whistle silences all chatter on the field. The stadium is filled with the booming drumline as the Illinettes weave their way in and out of the band. From a bird’s eye view, the band morphs into impressive shapes of ships and skulls.

At the end of the set, the band pauses for imaginary applause. Houser’s voice booms through the stadium.

“That was great. Let’s make sure that wasn’t a mistake,” Houser said. “Let’s do it again.”

Houser’s desire for perfection is for good reason: He begins planning the marching band drills at least a year in advance. He began planning this year’s Homecoming show last year. The  theme will be in honor of the 50th anniversary of the rock ‘n’ roll band Chicago.

Trumpet player Emmett O’Brien, freshman in FAA, is excited for the concert.

“I’m also in wind orchestra, so I get to do that concert band setting and go into the Marching Illini,” O’Brien said. “It’s two great atmospheres that I get to be a part of.”

Some members of the Marching Illini continue to march after graduation by joining the alumni band. The alumni band’s biggest event is returning to perform with current members during the Homecoming halftime show, a tradition many members look forward to.

For Houser and many others, seeing former and current band members play together is more than keeping the tradition alive; it demonstrates how music can transcend differences.

“Knowing that some of these same people coming back marched some of the same positions that our current students are, and they share that,” Houser said. “Regardless of age, regardless of socioeconomic situation, race — all these things that we talk about in terms of being inclusive and diverse — you know this is the one thing that our students and alums have in common and it’s pretty neat that that closes generational gaps, and so many gaps when we look across our ensemble.”

The alumni band will be featured in next year’s Homecoming show, the 150th celebration of the Marching Illini. Houser began planning for the 2018 celebration last year.

To celebrate, Houser plans to pay homage to the band’s sesquicentennial by celebrating throughout the football season. Plans are in the works to replicate the very first halftime show and to incorporate different eras at each football game. In preparation, Houser is currently doing extensive research and pouring over old sheet music.

Though Houser is always thinking several steps ahead, he cherishes his time with his current students.

The Marching Illini is already halfway through their season, and the final home game against Northwestern is Nov. 25. This game, dubbed the “senior highlights show” by the band, is the last time the seniors march on the field as part of the Marching Illini.

For now, the Marching Illini still has this year’s Homecoming celebration and several home games to perform at before finishing this season.

“That’s a tremendous day for me personally, because I’ve seen these students for possibly four, maybe five years. They’re very much a part of the family,” Houser said. “And so, knowing that they’re going to go on and do wonderful work outside in the real world, but (I’m) also sad that we’re going to lose them.”