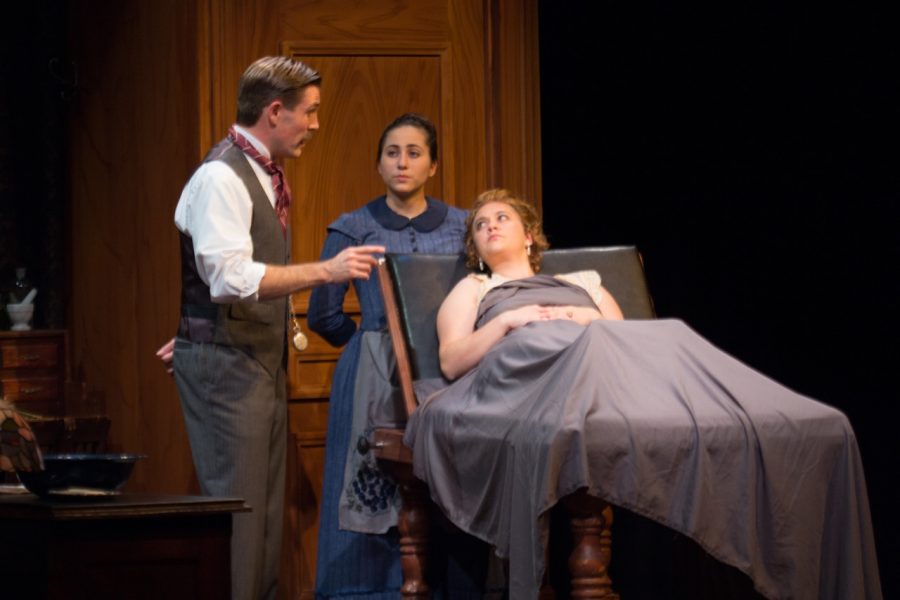 Walking into the Studio Theatre at the Krannert Center for the Performing Arts, the audience is greeted by an arrangement of rugs, sofas and coffee tables placed to look like a living room.

However, there is another room within the set, separated from the rest by a door, containing little more than what appears to be an operating table and odd-looking medical tools.

The play is set in the United States during the late 1800s, just after the Civil War and Thomas Edison’s discovery of electricity. The plot circles around Dr. Givings, a man who can best be described as an early form of a gynecologist, along with his wife and the patients whom Dr. Givings treats in his home.

The play is also set in a time of rapid advancement — a period where people were both fascinated and terrified of what science and the newly discovered electricity had to offer.

“I relate to (my character’s) blind spots. I relate to his love of his wife,” Coughtry said.

The philosophy Dr. Givings has is that “these are the rules of life, and we are going to follow these rules … because that is all he knows,” Coughtry said. “His work is his world.”

Coughtry said if he could give one piece of advice to his character, it would be to stop knowing and start listening, especially when it comes to his own wife. He explained throughout the play he eventually realizes that fact.

“He doesn’t really know how to help (his wife),” Coughtry said.

Lisa Gaye Dixon, associate professor of theatre at the University, directed the production.

“I think (the show) is funny, quirky; I think it’s very sweet and lovely,” Dixon said. “It’s sexy but in a non-salacious way.”

Dixon said that the play is also very relevant in modern day America “given our current state of affairs.”

Coughtry said one of the play’s biggest struggles is for Catherine Givings to be truly seen by her husband. The restraint that society felt was proper in a marriage during this time period, which  drives an emotional distance between these two throughout the play.

Because women of this time were typically corseted and restrained physically, Coughtry said, it adds to the play’s theme of restraint on a more emotional level as well.

“You can’t really be seen when you’re in a corset,” Coughtry said.

“(This play) spoke to me about women not being able to embrace their power, physical, sexual, sensual or otherwise but taking joy in being completely themselves,” Dixon said.

The play also spoke to Dixon about finding a partner, male or female, who enjoys you for being completely who you are and being able to live in the world together.

Anna Sellas, freshman in Education, attended the play on opening night. To her, the storyline of this play demonstrated much about relationships, but she enjoyed the humor of the performance the most.

Although much of this play circles around female characters, there is one patient Dr. Givings treats who is a man and a painter. Sellas found this character to be her favorite from the production, due to his interesting qualities.

Throughout the production, Mrs. Givings struggles with feeling like an adequate mother to her newborn daughter.

“I wish there was a resolving point with the mother and her child; I wish they would have bonded at some point,” Sellas said.

Dixon hopes that after seeing this show and witnessing the characters’ internal struggles, audiences will walk away knowing to accept and love themselves, including all their flaws.

“If you’re able to be completely yourself and take joy and pride in who you are, then the world can be a much more positive place,” Dixon said.